The Return of Mike Hammer

Written by Patrick
By Gad, sir, you are a character. 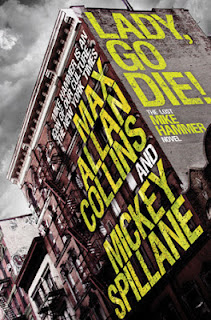 Regular readers of my blog know that when I read I, The Jury, the first Mike Hammer novel, my reaction was very negative. Well, that’s the nice way of putting it: truth be told, I was positively disgusted by the “hero” and the graphic violence. In fact, I chose it as one of my worst reading moments of 2011. But like him or not, Mike Hammer’s influence on the genre cannot be denied.

Indeed, the best defenses I’ve read of the character come from Max Allan Collins. In the collection Books to Die For, Collins wrote about Spillane’s I, The Jury. He drew some surprisingly astute comparisons between the book and an Agatha Christie plot – although no mention was made of the major plotholes, which were pointed out by Bill Pronzini in Gun in Cheek. But once again, I found myself impressed with Collins’ defense of the series, though it didn’t make me like Mike Hammer any more. Last week, when I reviewed Collins’ novel True Detective, I was honoured when Collins himself visit the blog and left a comment, where he asked me not to give up on Mike Hammer.

Well, he did ask, and quite politely. And after suffering through the pretentious nothingness of Paul Auster’s City of Glass, what could be more different than a Mickey Spillane novel? And what could be more appropriate than reading the recently-released Lady, Go Die!, an unfinished sequel to I, The Jury which Max Allan Collins completed for Mickey Spillane? Well, the verdict is in: Lady, Go Die! is… actually pretty good. I can tell you this much: it made for one helluva good read.

It all starts when Mike Hammer’s friend in Homicide, Pat Chambers, tells him he needs to take a vacation from the dangerous streets of Manhattan. After Mike Hammer tracked down and avenged his best friend’s killer, he turned into an alcoholic wreck, but he decides to finally move on with his life and goes for a quiet weekend getaway on Long Island with his secretary Velda. So off they go to the quiet town of Sidon, where Mike comes across a bunch of goons—turns out they’re bent cops—beating up a mentally challenged person nicknamed Poochie. It seems that they’re eager to find out whether he knows anything about a certain yellow-haired lady, and before they proceed much further with their third degree, Mike intervenes, beating up the ringleader and rescuing Poochie from a severe beating. 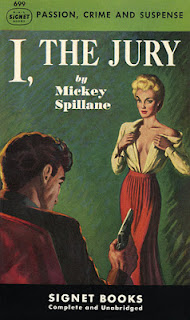 In good time, the missing dame turns up in a park naked, draped over the statue of a horse. Mike soon stumbles over a massive illegal operation over which the dead woman presided with a silent partner, and begins to search for the killer. And the plot is actually pretty decent. There’s no way we’ll ever be certain what Mickey Spillane had in mind for the ending, but Max Allan Collins does a neat job of tying all the loose ends together. Although I had no trouble spotting the culprit, there are one or two clues in here—though I have no idea if it was Spillane who planted them or Collins.

The major, surprising difference between this book and my previous experience with Mike Hammer is that he seems to have some level of decency in this book. In I, The Jury, he attacked and beat up half the people he came across with little provocation, and slept with every woman he came across on the job. The women are still mainly there for their sex appeal, but the only people he beats up in this book are cops out of Raymond Chandler’s worst nightmares and tough-guy goons who had it coming. He rescues Poochie in the very first chapter, after all, and is a genuine friend to him for the rest of the novel. Mike even befriends a Polish man named “Big Steve” Kowalski, and they share a genuinely emotional moment reminiscing over World War Two and how (from their perspective) the Army’s policies were FUBAR. It gives you an interesting insight as to why someone as politically incorrect as Mike Hammer could have become so huge.

Mike Hammer even sneaks in a few funny one-liners, and some of the descriptions are, well… unique. They can be funny or memorable or both, but the prose throughout is lean, mean, and really tough. Here are some samples:

His face was a bloated red mask of fury; all the purple veins in his nose had dilated until it looked like a cross section of a Martian landscape.

“You see, somebody tried to kill me earlier, and I think it was your boy Dekkert.”
Veins stood out on his forehead. “What? My God! What were the circumstances?”
“The circumstances were, he missed. Big mistake.”

Johnny sucked in deep on the cigarette holder, and when he finally exhaled, smoke floated skyward like a new Pope had been picked.

That being said, the violence is described with cringe-inducing imagery. That in itself isn’t necessarily bad—for instance, it works when the scene of another murder is described. My real problem is that Mike Hammer enjoys the brutal violence he inflicts, which really prevents me from liking or admiring him. Particularly brutal is a bit near the end, where Hammer gleefully describes how he shatters a man’s wrist by slamming the door of a heavy metal safe onto it over and over again! If that alone makes you wince, wait till you read the actual passage…

But overall, Lady, Go Die! is surprisingly enjoyable. It hasn’t quite turned me into a Mike Hammer fan—he enjoys violence too much for my tastes—but the character has depth in this book that I really didn’t expect to see from the psychopath of I, The Jury. The prose is gritty and tough, and much of the descriptions are memorable, although the violence can be cringe-inducing. And the plot is surprisingly good, even fairly clued. I liked the book, and really, isn’t that all we really want from a book in the end?