The Art of Pretentiousness 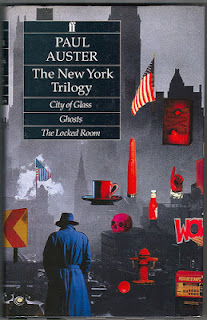 Every once in a while, a book comes along and changes everything. A book that forces you to look at the world in a new way and to question everything you felt you knew. It’s a book that can define a generation, and change the course of history. Paul Auster’s City of Glass is such a book. It dares you to ask “Who am I?” and “What the hell am I doing reading this?” Truly, this book represents the very epitome of Literary Art. No other book has affected me as much as City of Glass this year. This masterpiece, this tour de force par excellence, has forced me to look over my previous blog posts and wonder what I was thinking. The word “pretentious” does not mean what I thought it meant. And so I would like to begin by apologising to Raymond Chandler for using the adjective to describe his work.

Paul Auster’s City of Glass is Book 1 of “The New York Trilogy”, and it was nominated for the Edgar Award for Best Novel. I’m glad to see that the Edgar committee has some sense. Finally, R E A L   L i t e r a t u r e  is nominated in the category. And believe you me, literature can’t get more real than this. See, the entire story revolves around Daniel Quinn, a fellow who – get this –  writes detective stories! Jolly good jumping jelly beans, what a delightful reference to the genre! Anyhow, one night, he gets a telephone call, asking not for Daniel Quinn but for… wait for it… Paul Auster! Say what? Yes, indeed, the author himself is asked for at the telephone. Or is he? For Auster appears as a character as well as being credited as the author, but it is Quinn who is the protagonist, and yet a third person altogether who writes the whole thing!!! Isn’t this whole thing delightful? So very metaphysical, in an almost Miltonian sense, though it never quite approaches the fluid poetry of Keats.

Oh, you want to know the plot? Please. Paul Auster has no time for such silly things as that! You see, the genius of this book is that this is a detective story about being unable to resolve a detective story!!! You see, the protagonist is hired to protect a mentally retarded fellow, a poorly written character who we’re supposed to feel sorry for because of his traumatic background. Instead, the character tramps around on the streets, and eventually (for no reason at all) casts himself out of his own home, shitting in a dumpster and shunning humanity, waiting for his money to dwindle down into nothingness. Oh, the heartrendering drama!!! Neither the reader nor Quinn ever know what he’s supposed to solve in the first place, but what does that matter in the hands of a literary genius like Auster?

Ah, and indeed Auster is a very literary genius. He’s sure to let the reader know. The entire book constitutes a series of lectures on various subjects that have no relevance to anything, but which are literary – OOOOOooooooohohohohoho God, they are liiiiiiiiiiiterary!!! Yes! Oh yes, yes, yes! 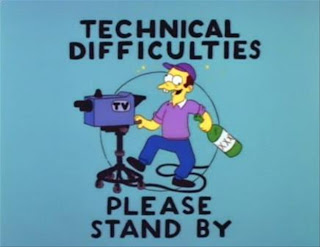 We are lectured on the symbolism of Milton’s Paradise Lost, the prophecy of Humpty Dumpty, the significance of taking a shit, the importance of words, and above all rhyming. It doesn’t matter that when you pick up a detective story you’re expecting detection – this is a perfect opportunity to comment on anything but the detective story, and thus get you to question your fundamental expectations when approaching a detective story!!! Isn’t that just genius??? 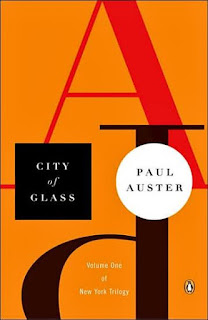 It’s a shame that this book is not quite perfect, though. At one point, Paul Auster has a lecture on Don Quixote which reads rather like a mystery would. A very short, tongue-in-cheek sort of mystery, that is, in which he questions the authorship of the book, and which might give readers the wrong idea about what kind of book they’re reading. This is not supposed to be merely amusing – THIS… IS… LITERATURE!!! If only Auster had cut this portion entirely out of the book, and maybe had published it separately if he wanted to, readers could read this masterpiece without worrying about the possibility of being entertained!

Oh, and don’t even get me started on the metaphors, the pointless asides that constitute the very essence of L i t e r a t u r e. I think there’s something very appropriate about one of the opening scenes being about Quinn taking a shit. And of course, the author shows nothing but respect for the genre of the detective story that he so deliciously subverts:

What interested him about the [detective] stories he wrote was not their relation to the world but their relation to other stories. Even before he became William Wilson, Quinn had been a devoted reader of mystery novels. He knew that most of them were poorly written, that most could not stand up to even the vaguest sort of examination, but still, it was the form that appealed to him (…) 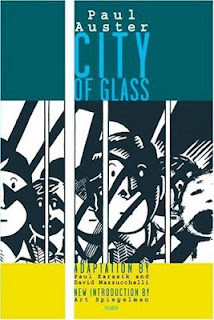 It truly puzzles me why I had never heard of this book until now. Surely its cultural impact must still be great! For Auster makes such stunningly original observations. For instance, it’s very true what he says near the end of this novel: if you live on the streets long enough you’ll start looking like a bum! My… God! I’ve read the passage several times and still I can’t help but feel amazed. It’s all been so simple all along! We must let the people know! The world must know of this stunning insight into reality!!!

And so, my friends, rise up, and go on your merry way knowing that Paul Auster, like a knight in slightly shit-stained armour, is here to defend the tradition of true Great American L i t e r a t u r e. Be sure to spread the Gospel According to Postmodernism, and let the world know of the genius that is this masterpiece, City of Glass. This is such a great book that I simply cannot allow myself to continue with the other two parts, for fear of ruining this story's pristine brilliance.