'Tis the eye of childhood / That fears a painted devil

Written by Patrick
Joe Alex was the pen name of Polish author Maciej Słomczyński (1922-1998). His most famous accomplishment is that he was the only person in the world to translate the complete works of William Shakespeare – an accomplishment I mention because it is relevant to today’s review. Unfortunately, his translations have been criticized as unclear, unfaithful to the source material, and lacking “literary value”—whatever that is. Still, the accomplishment itself is an impressive one, and it is a work of Shakespeare’s – sort of – that lends his novel Jesteś tylko diabłem (You’re Only a Demon) its title.

I say “sort of” because the text in question is The Birth of Merlin, which although originally credited as a co-production between Shakespeare and William Rowley, most scholars nowadays agree that Shakespeare didn’t write any of it. Another reason I say “sort of” is because the book kicks off with the following quote of The Birth of Merlin, translated into Polish… and the lines I have highlighted are all condensed into the phrase “Jesteś tylko diabłem”.

DEVIL. Ile blast thee, slave, to death, and on this rock
Stick thee an eternal monument.
MERLIN. Ha, ha, thy powers too weak; what art thou, Devil,
But an inferior lustful incubus,
Taking advantage of the wanton flesh,
Wherewith thou dost beguile the ignorant?
Put off the form of thy humanity,
And cral upon thy speckled belly, serpent,
Or Ile unclasp the jaws of Achoron,
And fix thee ever in the local fire.
DEVIL. Traitor to hell! curse that I e're begot thee!
MERLIN. Thou didst beget thy scourge: storm not, nor stir;
The power of Merlins art is all confirm'd
In the Fates decretals. Ile ransack hell,
And make thy masters bow unto my spells.
Thou first shall taste it.-- [Thunder and lightning in the rock.
Tenibrarum princeps, devitiarum & infirorum deus, hunc incubum in ignis eterni abisum accipite, aut in hoc carcere tenebroso in sempeternum astringere mando.
[The rock incloses him. 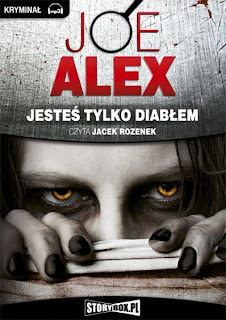 I have no idea who translated the text into Polish, but it’s quite possible the author did it himself. At any rate, throughout the book this text is treated as though it were one of Shakespeare’s own plays. According to the online Polish crime wiki, Mordopedia, the book was originally published in 1960, and the setting is post-WWII England.

Jesteś tylko diabłem opens in London at the apartment of Joe Alex, our main character. He is, we find out, an author of detective stories as well as an occasional amateur investigator. As the book opens, he is training in the art of self-defense with his trainer, Doctor Yamamoto, when the phone rings. It turns out to be the famous criminal defense lawyer Sir Alexander Gilburne, who asks to see Joe that day. Intrigued, Joe agrees, and later that day Gilburne arrives with a friend, Thomas Kempt.

Sir Alexander Gilburne has come to see Joe for advice. A few months ago, the unrequited love of his life, Patricia Lynch, returned to England after years of living in Africa, caring for an ailing husband. Upon his death, Patricia returned to her mother’s home in England. The mother, Elizabeth Ecclestone, is an elderly cripple in a catatonic state due to illness, desperately clinging onto what little life she has left. She lives in the secluded Norford Manor, along with her son Irving (a well-known historian and obsessive amateur demonologist), his daughter Joan (an Olympic sprinter) and her husband Nicholas Robinson (a famous artist). There’s also the domestic staff, the local doctor in charge of Mrs. Ecclestone’s case, and a nurse.

Soon after arriving in England, Patricia and Sir Alexander resumed a romance from long ago, and finally, Patricia agreed to marry him. But that very night, Patricia locked herself in her room, placed the key on her desk… and was found dead in the morning of cyanide poisoning. But strangest of all—a footprint appeared in the book she was reading… the footprint of a hoof, as though a gigantic mountain goat had left it… or perhaps Satan himself! What makes the situation even stranger is that on the night of Patricia’s death, someone turned the portrait of John Ecclestone (the man who built Norford Manor), so that the face was facing the wall. And yet, a coat of dust was all over the canvas, and it was not disturbed in the least!!! 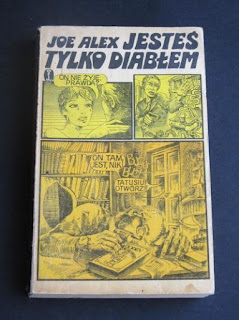 The legend goes like this: John Ecclestone accused 14 women of witchcraft back in the 17th century. He claimed to have seen these women attend meetings of a coven from the windows of his house, and naturally, his word was accepted against that of the women. All but one of them confessed under torture, and when they were being hanged, she cursed John Ecclestone and his family, claiming that Lucifer would wipe out his descendants in the tenth generation. (Talk about delayed revenge!) As it so happens, that tenth generation is alive and kicking now, and Patricia was part of it… And a few days ago, Sir John’s portrait was turned around all over again…

The question is, how could anyone have murdered Patricia Lynch and left the satanic footmark behind? And for that matter, how could anyone have turned around the portrait without disturbing the dust and without leaving a fingerprint? Joe Alex comes to investigate, coming to Norford Manor by pretending to be a demonologist hoping to gain expert insight from Irving Ecclestone.

This book was an excellent read. Probably inspired by John Dickson Carr, it is wildly atmospheric, especially when you read the account of the hanging of the witches, when John Ecclestone pleads with them to confess with a sinister sort of false piety. It also helps that the impossible situations are memorable ones that help build up the eerie atmosphere. A second locked-room murder takes place, but it takes place very late in the book at well over the halfway mark: we spend our time till then investigating the impossibilities and building up tension and atmosphere to the breaking point. 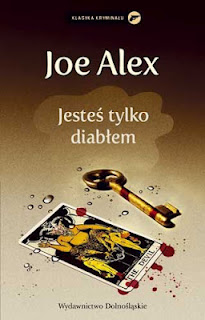 Unfortunately, not all the impossibilities have good solutions. Although the method for moving the painting is terrific and beautifully simple, the way the murderer leaves the locked room is pedestrian, to put it kindly, and the same goes for the devil’s footprints. However, the solution isn’t as big of a letdown as you might expect—despite the bland nature of the locked room, the mechanism is just part of an intricate plan, all of which can be reasonably deduced. I only figure out half of it after a certain point in the story, and was completely fooled by the other half although I really should have known better. After the killer has been unmasked, Joe Alex comes back over the entire story and points out to the reader just what you should have spotted and what deductions could be made from that fact. It’s a really good way of wrapping things up.

The only problem with the plot construction is that it forgets about one plot thread by the end—we are told that the family dog was poisoned, but it’s almost completely forgotten by the end and the author forgets to explain it. Ah well, we’re all human, and it was never a major question to begin with. What delighted me most about this story is that every single arcane detail could have been a clue in disguise, and the author delights in it. Sir Alexander walks with a limp and relies on a cane—is that supposed to be a clue? What about Joan’s running? Or her husband’s habit of getting up early to paint? And there’s a mysterious figure in the woods at night, praying to the Devil himself…

The characters are generally well-defined, and the book surprisingly considers some heavy moral questions. Irving Ecclestone is obsessed with demonology and spends much of his time giving readers arcane facts about witchcraft throughout the ages. These form fun little digressions. Joan Robinson is determined to succeed at her career at all costs, even if it means displeasing her grandmother by not having any children. As for Elizabeth, she was generous and by no means a prude; but when she thought Joan had deliberately insulted her, she changed her will to cut Joan out of it. She also made an agreement with the local doctor that for every day she lives over the age of seventy, he gets a certain sum of money. Unfortunately, just a few months after signing those documents, she was struck with paralysis and has been living in a catatonic state since. At one point, the characters wonder whether she would have signed the agreement had she known what she would be like in a few months’ time.

The character of Joe Alex is a fun enough one. He has the tendency to suddenly quote various texts, and at one point he looks at a piece of writing found by a corpse and his reaction is “I’ve never seen so many mistakes in Latin all at once!” He will digress into the history of demons in Europe and has the habit of muttering cryptic phrases. He manages to do all this without once getting annoying, which is rather an accomplishment in itself. He also has a colleague in the CID, named (oddly enough) Ben Parker!!! (So Uncle Ben didn't die at all!!!)

Overall, this book is rather a triumph in its own little way. One impossibility has an excellent solution, while the rest are pedestrian, but the book’s plot is complex and these less-satisfying impossibilities are buried in a complex plan that you should be able to deduce for yourself. It’s very much in the “fair play” tradition and is considerably boosted by the eerie supernatural atmosphere. Jesteś tylko diabłem comes recommended; unfortunately, the book is not translated into English. However, the author’s books have been translated into at least thirteen languages, including German and Russian, and so perhaps not all is lost. However, most Russian translations of his books (at least those that were distributed in the former USSR) were apparently published without the agreement of the author or his descendants. It’s just another memory of the good old Communist days in Poland.

Note: Due to a lack of evidence, I cannot count this book as part of my 2012 Vintage Mystery Reading Challenge. Although it's likely it was written prior to 1960, the book itself was published in 1960 on the nose and the only copy I own is an audiobook, which incidentally, was excellently-performed.