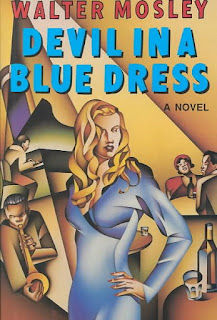 Ezekiel “Easy” Rawlins has just lost his job at the factory. He is desperate for money in order to pay his mortgage on his home. But you see, Easy is a black man in post-WWII Los Angeles, and the world isn’t particularly kind to people of his race. But Easy’s luck is about to change. He is introduced to DeWitt Albright, a shady character who takes care of people’s problems. Albright wants to find a white girl, and his only lead is that she may have been frequenting the kind of clubs that Easy visits. So DeWitt subcontracts: Easy is to find the girl and let Albright know where she is.

That’s easier said than done. Easy is very soon arrested for a murder, and he finds himself thrust into a racially segregated world where rich men fix election results from the comfort of their office and where police treat black men like they are the scum of the earth. The result is a highly stylised, dark, and tough private-eye novel in the vein of Dashiell Hammett and Raymond Chandler.


Devil in a Blue Dress contains some excellent writing. I’m reminded of the opening scene of Farewell, My Lovely, where Phillip Marlowe finds himself at a “coloured” bar – and while an uncomfortably racist sequence, it is far more palatable for me than the misogyny, racism and homophobia of The Big Sleep. Devil in a Blue Dress reads almost like a rebuttal to that scene, written from the point of view of a black man who would frequent such establishments.

Easy Rawlins is a very likeable character. He is a charismatic black man who owns his own little house—he’s trying to live up to the American Dream, but he slowly realises that it isn’t a dream meant to be shared by black men. When things get particularly tough, a voice inside his head lets him know what he has to do to survive “like a man”, and he obeys the voice. Things get particularly interesting when a friend of his from the past, Mouse, arrives on scene… but I don’t want to say too much there. 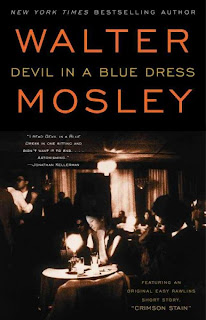 Unfortunately, the plot isn’t a primary concern of the author. While the story is complex, fast-paced, and interesting, the only reason we ever find out whodunit is because a character walks onstage, gives Easy a piece of knowledge whose existence we never had reason to suspect, and walks off having pretty much handed Easy the solution on a silver platter. It’s an unsatisfying conclusion to an excellently-written tale, and I frankly didn’t believe all the characters’ motivations in acting like they did, especially the titular “Devil in a Blue Dress”.

Incidentally, there is an extremely graphic sex scene in this book. I bring this up because I know that not everybody is a fan of such elements in books. I don’t particularly care for sexually explicit content—I find it far more interesting to merely hint at these elements. Here, the sex is used wisely, to develop characters… but at the same time, I really didn’t need all those details, and I could have lived quite comfortably without them.

That’s just a personal preference, though, and it’s a testament to Mosley’s writing ability that despite its flaws as a detective story I found Devil in a Blue Dress to be well worth the read. It’s an excellently stylised book that feels like it was lovingly crafted. The protagonist is quite likeable and the story is both interesting and complex, despite a more-or-less arbitrary conclusion. This is a book that fans of film noir or of the hardboiled style should definitely read. At the same time, I can only recommend this as a mystery story and not so much as a detective story.