Of Saints and Sinners 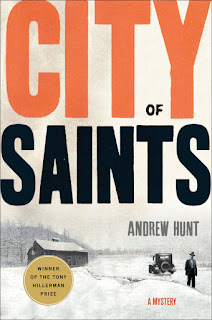 Deputy Art Oveson is a young man with a wife and two children. He also happens to be a devout Mormon, living in Salt Lake City in the 1930s. Although it’s nicknamed the city of saints, there is more to Salt Lake City than meets the eye. As clean and virtuous as its exterior may seem, it is a city with more than its fair share of crime and corruption, and pretty soon, Oveson finds himself smack in the center of it all.

It all begins when a wealthy socialite is found dead, brutally murdered by being repeatedly run over with a car. The late Helen Pfalzgraf was the wife of prominent physician Dr. Pfalzgraf, whose reputation as a doctor is nation-wide. The newspapers seize on the story and before long they are calling for someone’s head. Sheriff Cannon, who is heading the investigation, is an incompetent buffoon who is seeking re-election, and decides that the Pfalzgraf case is a top-priority matter—after all, if the case is solved quickly, it’ll be a feather in Cannon’s cap and will make his re-election that much easier…

And so Art Oveson is drawn into the case that is chronicled by Andrew Hunt in City of Saints. It is a historical mystery novel that is inspired by hardboiled detective novels as well as film noir: the idea of a city with corruption under the surface, of a family with dirty secrets to hide, of a lone-wolf detective having to walk to mean streets… These are some of the similarities.

However, I personally found more differences to the traditional hardboiled style; unlike the last book I reviewed, Devil in a Blue Dress, this novel feels comfortable in doing things differently rather than being a strict stylistic homage to film noir. This is largely due to the main character, Art Oveson. He is a devout Mormon, a family man who loves his wife and never touches alcohol (or, for that matter, coffee)… although ice cream is his own particular vice. He doesn’t even swear. When he gets set to confront a suspect near the end of the novel, he tells the reader that “I had to act tough, even if I didn’t feel tough, even if I knew it was just an act.” Art also seems to be living in his father’s shadow—his father was a legendary lawman before being gunned down years ago, and his brothers have all followed in his father’s footsteps. Art seems to take the case as an opportunity to prove he is worthy of his father’s legacy. All this adds up to create an excellent, fascinating character. Art is a lone-wolf detective who isn’t really alone; he has his wife and children to love and support him, even when it seems the sky is about to fall and crush them all.

Another character worth mentioning is Roscoe Lund, Art’s partner, a loud-mouthed cop who is big and tough, and as unlike Art as you can get. They form a classic Odd Couple, and despite their differences and the way they get on each other’s nerves at times, they form a genuine bond of friendship and gradually come to care for each other. Roscoe has a very interesting backstory, but because it comes fairly late in the novel, I hope you’ll forgive me if I am sparse on the details here.

City of Saints finishes with a historical note, where the author takes some time to explain that he based the novel on a real-life unsolved murder case, a dramatic case with twists and turns that made headlines until it was booted out by other cases like the Lindbergh kidnapping. These notes are quite interesting, and they help to clear up the lines between fiction and history throughout the text, which blended the two together so well that it was hard to see where one started and the other stopped. I did like the historical aspects of the novel. It conveys the era in a pretty lively way—I have no idea how accurate a depiction this is, but it’s certainly an entertaining one, and there are none of those annoying moments in historical fiction where character B, to emphasize how sympathetic he is to a modern audience, makes a big speech on Human Rights and how society is being unfair to women, blacks, Mexicans, Jews, gays, and [insert minority group of the year here]. It seemed like a fairly realistic portrayal of what the era was like—which I guess should be the case, seeing how author Andrew Hunt is a history professor.

I don’t want to spoil too much of this novel; suffice to say it was a highly entertaining read. There are moments of characterisation, but these are interesting moments that never overshadow the plot. The story is a very good one, full of interesting twists and turns. We follow Art’s reasoning throughout the case, and although some information discovered late in the novel is crucial to the solution, Art had to do genuine detective work to uncover that information. For that reason, the ending is far more satisfying than the ending of Devil in a Blue Dress.

I have one minor nitpick: part of the story relies on secret recordings made by X of his/her clients. When we finally hear a crucial recording, X asks Y to state his/her name, etc., to which Y replies “I certainly will.” Why??? X knows Y quite well, and this should have raised Y’s suspicions. It doesn’t matter too much, but it’s a moment that stood out for me.

Overall, I highly enjoyed City of Saints. It was an excellent and highly entertaining read, balancing historical elements with the elements of a good mystery story. The characterization is genuinely interesting, and I found myself particularly interested in the character of Art Oveson. I certainly hope we will be seeing more of him in the future!

I had the pleasure of attending a book launch for City of Saints last week, where author Andrew Hunt spoke to a group of people about this book, why and how he wrote it, etc. He also read a chapter aloud, after which there was a book signing. I was very impressed by what I saw—the writing was quite good and the brief glimpses I got of the characters instantly showed me that they were miles above the standard tough-guy-private-eye and psycho-sadist-cop that seem to populate every modern mystery story written nowadays. After the launch, I came up and introduced myself to the author and asked him a few other questions, which he patiently answered. He quite kindly signed my copy of the book with a warm dedication. Overall, it was a terrific experience—one that I skipped my course in Detective Fiction to attend—and I’m quite glad that I went to the launch and that I gave this book a chance. It’s a very good debut novel and if it becomes a series, it seems like a very promising one indeed!