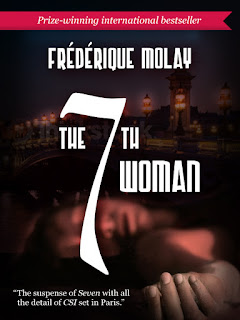 Usually, when I review a French book on this site, I spend my time moaning about how unfair it is that it has not been translated into English. But today, the situation is different. Yes, I am reviewing a book that was originally written in French, but it has been translated and published in English. This is thanks to the efforts of a new company called Le French Book. According to their website, Le French Book “brings France's best crime fiction, thrillers, novels, short stories, and non-fiction to new readers across the English-speaking world. If we love it, we’ll translate it.”

So far, three mysteries have been translated and published, and hopefully more are on their way. One of these is a book by Fréderique Molay entitled The Seventh Woman. I wouldn’t exactly call it a mystery, though—this is far more of a thriller, and that feeling was only amplified by the main character’s name: Nico Sirsky. Maybe it’s a sign of my maturity (or rather lack thereof) but I kept envisioning Steven Seagal, who played a character named Nico Toscani in Above the Law. (For the record, I don’t particularly like Seagal, but as his movies go Above the Law is better than most of the others.)

But let’s get back to the story: this is a serial-killer hunt, where a madman declares war on the criminal investigation division—known as La Crim’—which is headed by Nico Sirsky. But this isn’t a scenery-chewing rockstar-terrorist played by Tommy Lee Jones: this is a perverted murderer who tortures and mutilates his victims. He intends to murder seven women in seven days, and thus begins a major manhunt for the killer, and a race against time to find the titular seventh woman before it’s too late.

I like serial killer hunts in the vein of The ABC Murders or Cat of Many Tails. The Seventh Woman is a far more thriller-like approach to the plot idea, but it’s a good example of this kind of story. It’s certainly well-written: when I first read the details of the horrific mutilations, I dropped by brand-new Kindle Paperwhite. Not so much out of shock or disgust (and thankfully, I was sitting on my bed at the time, so my Kindle’s fine), but more out of horror. My grip on the machine became very weak and down she went. It wasn’t just due to the grisly details, but also with the way it was written. Thankfully, my queasiness subsided and although the mutilations do not cease we don’t get quite as detailed a look after that. 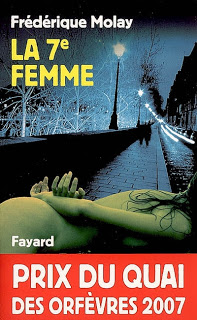 I have somewhat mixed feelings about the story. On one hand, it was a terrific journey, full of genuinely surprising plot twists that I really enjoyed keeping track of. On the other hand, the book’s destination was very obvious almost from the first chapter. As soon as character X walks on, I said to myself “That’s the seventh woman.” I was right. As much fun as I had reading the book, some of the elements are all-too familiar and we could play a round of Cliché Bingo with this book’s main character. Health issue (here, a pain in the stomach) that periodically bothers him and he has to go get it checked out? Check. Problems with the ex-wife? Check. Women desire him left and right? Check. Psychotic criminal targeting him for a never-fully specified reason? Check. Obvious romantic interest? Check. Sometimes these elements slowed down the plot but in general the story is the book’s focus.

The other problem I have is with the villain, who periodically takes over the narration and drools over his latest victim in a Psycho Monologue, a tendency of modern fiction that I find really annoying—though not half as annoying as postmodernism. It’s not helped by the fact that the villain is really pretty bland, and I swear that the final confrontation between him and Nico has been done over and over again in action movies. In fact, the recent movie Assassination Games has a take on this kind of confrontation that I found far more interesting.

But these are my personal nitpicks. Overall I would recommend The Seventh Woman to readers who like this kind of thing. The climax has been done before, but the author does infuse it with some genuine suspense. Author Frérerique Molay writes very well, and occasionally there is a touch of horror and a layer of suspense throughout. Although you know where your final stop is, the plot manages to take you to interesting places. And overall, it was an enjoyable book to read. I commend Anne Trager’s translation of the book—it was really quite well-done, and the editing and formatting for the Kindle was also well done. I sincerely hope we’ll be seeing more from Le French Book, and as you can see, I have added its website to my list of links.