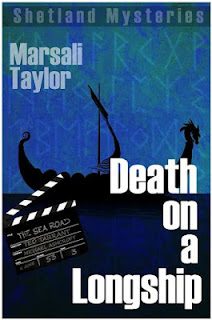 I was asked to review Marsali Taylor’s Death on a Longship all the way back in August, but I still had a summer job and school was around the corner, not to mention I had other review requests to get out of the way. So I had to decline an opportunity to be part of a book tour, although our good friend the Puzzle Doctor participated. The review was extremely positive, and so it made me eager to get around to reading this book. Unfortunately, with midterms, work, and unexpected stuff happening left and right, it took me well over three weeks to read this book. However, I’m glad to report that I easily kept track of everything. I never felt lost and when I picked up the book to read some more, I never felt like I had to refresh my memory on what I had read before. Marsali Taylor has written a very pleasant read.

But I’m getting ahead of myself here. The whole story revolves around Cass Lynch, a native of the Shetland Isles who returns to her homeland as part of a film crew, proudly skippering the replica Viking longship Stormfugl. This is being used for Ted Tarrant’s latest film, starring his beloved wife Favelle. They are Hollywood’s Golden Couple—Ted directs, Favelle stars, and come Oscar season they sweep all the awards out from under Steven Spielberg’s nose. (Seriously, how else do you explain his being snubbed as Best Director for Jaws, Close Encounters of the Third Kind, Raiders of the Lost Ark, or Munich? For that matter, how did Martin Scorsese not win for Goodfellas?)

So what do we do for the next 13 chapters or so? Well, I could answer that, but I’d be spoiling a delightful story. Marsali Taylor is really quite a promising talent. She throws plot threads wildly in the wind as though it were confetti, and then navigates the reader through the pea-souper she’s created with almost alarming ease. It’s all very well-done, with clues fairly planted for the reader to spot. And I’m ashamed to admit that I didn’t spot the culprit. I was convinced we were going to get ending X, and all the time I failed to realize that was what the author wanted me to believe.

Not only is the ending fun, the journey we take to get there is just as interesting. The portrait we get of the Shetland Isles is interesting, and the author infuses a bit of the language into her writing— there’s even an appendix where the author talks to us about the language and provides some definitions as well as some fun phrases she didn’t manage to work into the book (despite her best efforts). I was also very surprised to see one of the book’s subplots—whether or not a wind-powered electrical station should come to the isles—provides a balanced view of an environmental question. Pros and cons are both considered and there’s no easy answer to the question. I like it a lot when an author gives you a balanced point of view, whatever their personal views might be. For instance, Ross Macdonald was an environmentalist but provided a balanced view of an oil crisis in his excellent novel Sleeping Beauty.

Overall, Death on a Longship is highly recommended. It’s an excellent mystery, well-written, and gives you a nice picture of the Shetland Isles on which it is set. It’s a highly enjoyable book and author Marsali Taylor shows plenty of promise! Here’s hoping that this is merely the debut novel!