Death of a Reviewer

Written by Patrick
John Riddell, book reviewer for Vanity Fair, is dead. The medical examiner has viewed the body and has confirmed everyone’s worst fears: the poor man died of boredom right in his own library, surrounded by the previous year’s bestsellers! How lucky that Philo Vance is on hand, having had some previous experience with this sort of thing. * 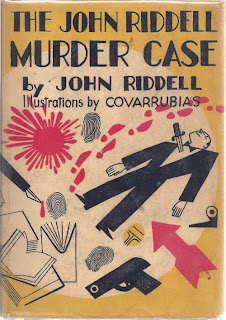 As you can perhaps guess, today’s book is a parody: The John Riddell Murder Case, written by “John Riddell”. Actually, the author is American humourist Corey Ford. The John Riddell Murder Case is one of the most hilarious books I’ve ever read in any genre, period. This is just one of those books that is full of laugh-out-loud moments, especially if you know what is being parodied. And the targets are varied: not only is S. S. Van Dine a target, so are such various people as Robert Frost, Dashiell Hammett, and ex-President Calvin Coolidge! What could possibly bring such different people together?

The answer is simple: they are the people responsible for last year’s bestsellers. Philo Vance comes down to Riddell’s library to investigate, and begins to read the bestsellers aloud, convinced that the answer to the whole puzzle must lie in them. Meanwhile, the corpse (which isn’t even dead to begin with) keeps pulling books off the bookshelf and passing them on to Vance and his fellow detectives. And whenever this happens, the author of that book is found murdered, stabbed through the heart, and wearing John Riddell’s left tennis shoe!

You might be thinking that I’m spoiling the book’s twist there for you, but I assure you I’m not. The book is completely self-aware and gives this away on the very first page. And because the book is self-aware, it breaks the fourth wall on multiple occasions. We are told that the case became known as the John Riddell Murder Case “owing to the fact that this title was used on the cover of the book”. The narrator keeps littering the text with footnotes that blatantly advertise Philo Vance’s previous adventures. The list of characters at the start of the book includes “DAVID CORT – Object of the dedication on page v”. And perhaps most delightful of all, Philo Vance says the following on the correct page:

“Can you make it anything else, Sergeant? Already there have been thirteen murders, and we’re only at”—he glanced down swiftly—“at page 124. Heaven only knows what author will be left intact by the time our book is completed.” 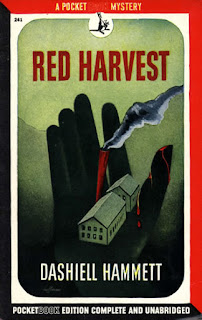 Meanwhile, the book moves from parody to parody, as authors drop dead left and right. At one point, eight authors are found dead in Chicago, including Dashiell Hammett (author of Red Harvest), which prompts a parody entitled “All Quiet on the Middle-Western Front”, a simultaneous parody of Chicago gangland novels and the infamous war chronicle All Quiet on the Western Front: gangsters are engaged in warfare on the streets of Chicago, where they must be careful only to murder characters from their own stories, but it’s so difficult to tell all these Chicago novels apart. There are plenty of other targets. One of my favourites occurs when the book decides to make fun of those puzzle books—you know, the mysteries that take two minutes to read and where the answers are printed upside down on the next page. The mysteries and answers proposed here are absolutely hilarious!


Another one of my favourite parodies occurs when the author zooms in on those “Best Short Stories of the Year” collections. The introduction by the fictitious editor is absolutely hilarious, as he proceeds to explain just what the selection process is and the ingenious idea behind the collection we’re about to enjoy. These are extremely accurate parodies of very self-consciously L i t e r a r y short stories, and I loved every page of this. And (last thing, I swear!) The John Riddell Murder Case has got one of the most hysterically funny crime-scene maps of all-time. If you’ve never seen it before, brace yourselves. Here it is below (click to enlarge): 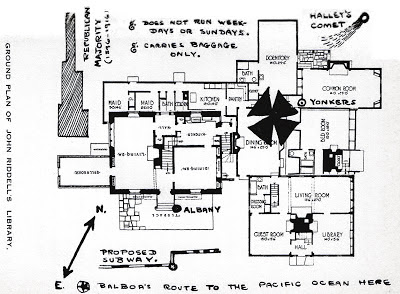 Unfortunately, The John Riddell Murder Case is extremely hard to find. When I searched for it in the Canadian library system, I turned up a blank. Copies can run up to $779 – but your faithful correspondent managed to snag a copy for a mere $50. (A search on viaLibri reveals that the cheapest copy currently available is $75.) And my copy had a very peculiar thing about it. You see, The John Riddell Murder Case had a sealed-off ending. Only four pages were sealed off, and the challenge “not to break the seal” was written in a very tongue-in-cheek way, but it was another way the book poked fun at mysteries. See, back in the day, some mysteries had a gimmick where they sealed off the ending and if the book was returned with the seal unbroken you got your money back. (John Dickson Carr’s debut novel, It Walks by Night, had such a gimmick.) I have never seen one of these seals… until now. Because you see, my copy of The John Riddell Murder Case had the seal intact! 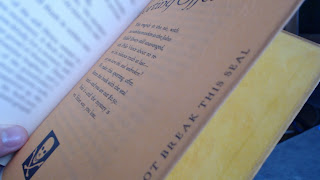 I’ve examined it closely and it looks like it could very well be the original, unaltered article (though I really can’t swear on this). I failed to realize what this meant until I reached page 318—I couldn’t read the ending! Or… could I? Using some trickery and my handy dandy webcam, I managed to take multiple pictures of the final four pages, then pieced them together and finished the book without ever breaking the seal. In keeping with the rest of the book, it’s a funny conclusion to the proceedings.

And that sums up The John Riddell Murder Case very well: it’s funny. I’d go so far as to call it hysterically funny. This is a terrific parody of all sorts of best-sellers, but particularly the Philo Vance stories. It’s an excellent book that mocks the genre without ever descending into mean-spiritedness or condescension. (Some people could learn a thing or two from this book.) What a shame it’s so hard to find!