007 Reloaded: For Your Eyes Only 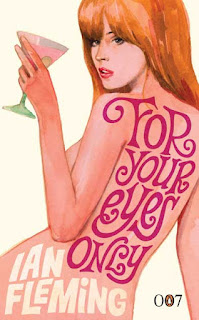 Today I will be reviewing the James Bond collection For Your Eyes Only story-by-story. This is one of only two short story collections involving James Bond, and this one contains only five stories. It’ll probably be best if I discuss my impression of the collection as a whole after I’ve reviewed the individual stories. So without further ado, let’s get started.

From a View to a Kill
This is far from Fleming’s most inspired story. It’s actually a pretty boring way to open the collection. James Bond investigates the murder of a secret service motorcycle rider. He was going on his usual route from SHAPE (Supreme Headquarters Allied Powers Europe) to his base when he was attacked and his secret documents were stolen. Bond doesn’t have much trouble finding the assassin, and you wouldn’t exaggerate much by calling the story a celebration of predictability. It’s just not all that creative nor interesting, especially when you consider that Bond’s previous adventure was the wild romp Goldfinger.

For Your Eyes Only
A major improvement over the first story, For Your Eyes Only opens with a Jamaican couple (the Havelocks) sitting at home when some Cubans come to pay a visit. They are led by one Major Gonzales, who tells the Havelocks that his employer is very interested in purchasing their home. The Havelocks refuse his offers until, finally, Gonzales orders his men to kill them so that he may negotiate the purchase of the estate with the next-of-kin. 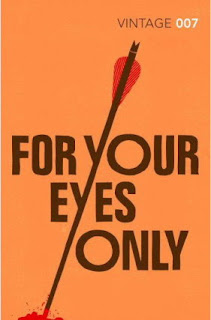 As it happens, the Havelocks were good friends with M, who was the best man at their wedding. And when M finds out about the murder, he makes a point of finding out everything about developments in the case. When the culprit is finally cornered, he summons Bond into his office and gives him his next mission: kill the man responsible and avenge the Havelocks.

This is one of the very best Bond stories. The plot is deceptively simple; it’s a straight-up revenge mission. But Fleming manages to make the villains credible threats: these are modern monsters who aren’t trying to take over the world, they just want to launder their money out of Cuba before Castro takes power. The casual way that the Havelocks are murdered really emphasizes the cruelty of these men, and their villainy is what gives Bond his job—a recurring theme throughout the series.

What particularly fascinates me is M’s dilemma over using Bond for this mission. He wonders whether he is sending Bond on a legitimate mission or if he is misusing government property for some personal vendetta. And Bond is content to simply receive his orders, leaving the decision to M. This dilemma really humanizes M in an unexpected way and brings his relationship to Bond into focus in an altogether interesting way.

Quantum of Solace
This is the most unusual Bond story, and also one of the best ones. This is the only time in the series where James Bond doesn’t go into action. He has just completed a mission and is trying to get through a boring evening with the Jamaican governor. It’s been an evening full of politeness but without any genuine camaraderie. Bond, trying to be flippant, says that if he ever marries he will marry an air hostess. That’s when the governor perks up and begins to tell Bond a story about a man named Masters.

You see, Masters married an air hostess, and the marriage at first seemed ideal. But slowly, cracks began to show in the marriage, and it turned into a veritable bouillabaisse of human emotion. The wife, Rhoda, began having an affair and didn’t bother to hide it from Masters. This slowly broke his heart, until he finally snapped and began to retaliate. The marriage deteriorated until only bitterness remained.

What makes this story so powerful is the human element, which works surprisingly well. This is probably because Fleming drew on his own marriage in writing this story— the story seems to reflect the state of his marriage at the time of writing. The titular “quantum of solace” refers to the idea that a marriage can withstand anything so long as the two parties show some basic humanity towards each other. Once that is lost, the “quantum of solace” drops to zero and the relationship is effectively doomed.

But it’s a complex story. At first it seems that Rhoda is just a little bitch and she deserves everything coming to her. Our sympathies at first lie with that poor fellow Masters. But his revenge is so cruel and humiliating that by the end, our impressions have changed. We see that Masters can be just as vicious – more so, even – and that the doomed relationship cannot simply be blamed on the woman. It’s a painful and tragic story, and at the end Bond himself decides that the human dramas of day-to-day life make his adventures seem rather dull by comparison.

M sends Bond to Italy. His mission is to investigate a drug smuggling ring, and do achieve this he gets in touch with a CIA informant named Kristatos. Kristatos points the finger at a man named Enrico Colombo, and Bond tries to get to Colombo through his girlfriendAs you can see, there is a considerable element of “risico” involved!

I like this story. It’s short yet it manages to pack in a relatively complex story. I liked how Fleming changes everything midway through the story by giving another side to Kristatos’ story. I don’t want to say much more for fear of spoilers, so just let me say that it’s interesting how, although no Bond film named “Risico” has ever been filmed, elements from this story have found their way into some of the films, most notably For Your Eyes Only.

The Hildebrand Rarity
American millionaire Milton Krest is on the run from the IRS… sort-of. He has a fake charity that is supposed to contribute to science, but the IRS is getting very interested in its activities. So Krest is trying to give the charity some legitimacy by coming to the Seychelles and locating some animal specimens that American museums are particularly interested in. One of these is the titular Hildebrand Rarity, a very rare fish that has only been found once. 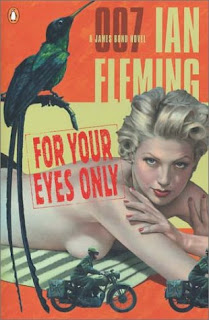 As it happens, Krest hires James Bond to be part of the diving crew searching for the rare fish. But as time wears on, Bond gets more and more tired of Krest and he develops an attraction for Krest’s English wife, Elizabeth. But the course of love ne’er did run smooth, for Krest is one of the nastiest people to ever appear in a James Bond story. The man is a megalomaniac who is also a bit of a psychopath. He’s got no grand plan for world domination, he just wants to avoid spending some tax dollars and get a free yacht and cruise out of it. But he’s also got a sadistic streak and he takes it out on his wife, using a whip made of a stingray tail. He calls it his “Corrector”.

While The Hildebrand Rarity is an excellent story about a nasty man getting his deserved comeuppance, I have to admit I’m not fond of the ending. It seems like the story has been setting up for a mystery, when late in the story something gruesome occurs and there are only two suspects. The mystery is never resolved, though there’s a sort-of hinting that so-and-so is the culprit. It’s the one flaw that mars an otherwise excellent story, not offering a satisfying conclusion and leaving you uncertain whether the final note should be triumphant or sinister.

Overall, I think For Your Eyes Only is an excellent short story collection. Two of the stories are among the finest in the Bond canon, and the only real let-down is the first story. This offers intriguing glimpses of Bond, and if you’re a fan this book is definitely worth checking out.

Note: This book is as of yet unavailable in the "007 Reloaded" series. It shares this distinction with the other Bond collection, Octopussy and The Living Daylights.