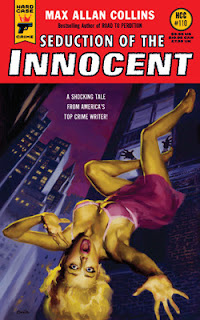 Comic books are destroying the youth of America! Consider the evidence: they promote and glorify violence as a way of life. They actively promote racism and intolerance. Some comic books, such as the tales of Batwing and his young ward Sparrow, promote some of the ghastliest sexual perversions. And how do we know all this? Simple. Dr. Werner Frederick says so.

As a result, the comic book industry is in a tough place. Congress is getting set to examine the problem of comic-books and how they defile the moral fabric of America’s youth. Angry parenting groups are burning comic books and the industry is losing money. Enter Jack Starr, the Starr syndicate’s troubleshooter. Whenever trouble rears its ugly head, Jack has to go and take care of it, and Dr. Frederick’s passionate anti-comic-books crusade certainly qualifies… This forms the plot of Max Allan Collins’ Seduction of the Innocent.

Over the last year, it’s become a genuine pleasure for me to look forward to Collins’ new books. Seduction of the Innocent is one of the most satisfying I’ve come across thus far. As a fan of the Golden Age of Detective Fiction, imagine my delight when I found out that Seduction of the Innocent is a tribute to Ellery Queen as well as Nero Wolfe! Jack Starr plays a very Archie Goodwin-like role: he has to go out onto the streets to collect information for an employer who rarely budges from her rooms (his mother-in-law Maggie Starr). Maggie eventually reveals the killer in a dramatic way, but couldn’t have done it without Jack’s legwork, and Jack’s narrative style is very reminiscent of Archie’s. As if that weren’t enough, Collins also constructs a “fair-play” mystery, which includes a delightful “Challenge to the Reader” in comic-book format!

Admittedly, the mystery is not the most challenging one to solve. I guessed the ending pretty early on, and was absolutely certain about 2/3 of the way through the book – at any rate, it was before the challenge to the reader was spelled out. However, I’m glad I was able to deduce the ending rather than rely on my narrative clichés to say “she’s too nice, he’s too nasty, X and Y have to end up together, so Bob must be the murderer!” The whole idea of clues and deception seems to have largely faded away from mysteries. All too often, the killer just confesses at the end and the detective somehow knew they were responsible, with no real clues to build any sort of a case on. So it’s very refreshing to come across a new book in which clues and red herrings are there for you to find.

This is my first exposure to the characters of Jack and Maggie Starr, and there are two earlier books about them. I really liked them. Jack was a nice guy who was doing his job. He can be tough when he has to be, but he isn’t some psychopathic thug. He’s intelligent and makes for good company. I liked “hearing” his narrative voice in my mind, and the scrapes he gets himself into are plenty of fun to keep track of. Maggie Starr is more in the shadows, but her scenes are also plenty of fun and she has a great moment at the ending where she reveals whodunit, why, and how. It’s a cheerfully over-the-top ending and makes no apologies about it, and I liked that.

As you can perhaps guess, this novel is really inspired by the whole anti-comics craze of the 1950s. I’m afraid my knowledge of this era is cursory at best, so I can’t give you too many details about the era. However, Collins’ book takes place in a fictionalised universe, where no trademark names are used, but fictional counterparts do appear. Some are instantly recognizable – Batwing and Sparrow, for instance – but rest assured, knowledge of the era is not necessary to enjoy this book.

Overall, Seduction of the Innocent is a delightful read. You’ve got your classic detection, you’ve got a great hardboiled narrator. You’ve got terrific art throughout. You’ve got likeable characters, and an interesting plot. I really enjoyed this book. There’s plenty to sink your teeth into and the book makes for a quick read; I highly recommend it.

Note: Anybody who enjoys listening to audiobooks might want to think twice about this one. You lose a few things from the book if you only listen to the recording. First of all, each of the chapters is prefaced by some terrific art from Terry Beatty, and it’s great eye candy. You’ll also miss the “Challenge to the Reader”, which was entirely dropped from the audiobook. There’s also an afterword from Collins, “A Tip of the Fedora”, which never showed up on the audio recording. So while it’s a terrific audiobook reading, you might want to think twice about it and go for the print or Kindle edition. Or, as Harry Bartell used to say about Petri Wine, “Don’t buy one, buy two!”