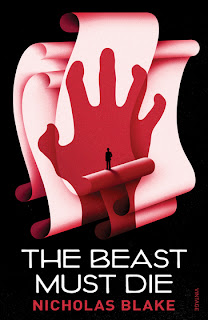 Thus begins the diary of Frank Cairnes, an author of detective stories under the pseudonym Felix Lane. But this isn’t a notebook in which he will set down the details of a fictional murder plot: he truly intends to find a man and murder him. But what could prompt a sane man to turn to murder?

It turns out Frank had a son named Martie, and a few months ago he had gone into the village to buy some sweets. That was when he got run over by a careless motorist; poor Martie never stood a chance. The police have been unable to trace the motorist responsible for the death, and he never stopped nor reported the accident. That man is the titular beast in Nicholas Blake’s novel The Beast Must Die, and when he is murdered, Cairnes’ journal is found and he immediately becomes the prime suspect. But Nigel Strangeways isn’t convinced…


Nicholas Blake (pseudonym of Cecil Day-Lewis) was one of the greatest writers to emerge during the Golden Age of Detective Fiction. Surely even Edmund Wilson would concede this much—after all, he was the Poet Laureate of the United Kingdom from 1968 until his death in 1972. So if I run across a dry patch in 2013 where I keep reading bad books and start complaining about it, someone needs to remind me of the happy times I spent reading books like this. The Beast Must Die is, quite frankly, my idea of the perfect detective novel. It quite literally has everything you can reasonably ask of an author. Excellent characters and atmosphere, some genuine suspense, and terrific detection complete with a surprising ending! All this can be found between the covers, and it’s a real treat, let me tell you. 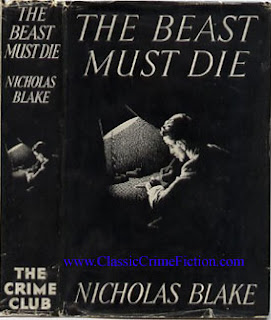 Central to the book’s success is the character of Frank Cairnes/Felix Lane. A detective story author by trade, Cairnes attempts to do what the police failed to do by finding his son’s murderer. True, he is aided in his quest by a smattering of luck, but he also makes some clever deductions until he finally finds his prey. Only when he does find his prey, George Rattery, he discovers that he is quite literally a beast. Rattery poisons the lives of those who surround him. He makes his wife’s life miserable and he takes sadistic pleasure in psychologically tormenting his son. Briefly put, the man has no redeeming qualities whatsoever, and so when Cairnes sets out to murder him, you feel sympathetic to his cause.

One of the most fascinating aspects of this character is his duality, however. In order to get close to Rattery (so as to precipitate his death), Cairnes goes undercover as Felix Lane, the detective story writer. He hides behind this pseudonym and begins to live a double life in order to properly establish Felix Lane’s fictional biography. He manipulates people he meets as Lane to further his murderous schemes, but the feelings he develops as Lane sink through the façade and resurface when he once again becomes Frank Cairnes. I don’t want to say too much more, but this theme plays a fairly prominent part in the events of the novel without being intrusive or self-consciously literary. If you read this novel for yourself you will see this aspect of Cairnes’ character develop throughout the novel, and it really makes for fascinating reading. 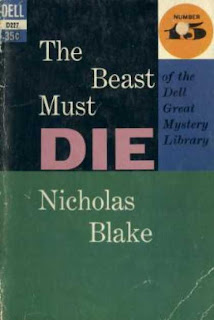 However, as terrific as the characters are, Nicholas Blake’s plot steals the show. This is plotting at its finest. Clues and red herrings abound and it really takes a lot of sifting to figure out whether any given piece of evidence is a genuine clue or an engineered red herring. All is explained in the end, with a genuinely surprising twist ending. I genuinely was not expecting the murderer to be who it was, and not too many authors can take me aback like Nicholas Blake did in this one. It’s a fine plot and it shows you that a good story does not automatically exclude good characters and atmosphere (unlike what critics in the Julian Symons/P.D. James vein would have you believe).

In fact, that is in many ways why The Beast Must Die is so damn brilliant. I spent a lot of time talking about character rather than plot, but that’s because in this book, the plot emerges from character. Their complexity is what fuels the story on. We discover more and more about these characters, and because of this the plot moves forward. Too many authors these days forget that such a thing is even possible. Many will spend so much time developing characters that by the end of the book the plot has yet to commence. Nicholas Blake achieves a fine balance, however, and many of the scenes that develop characters also help to develop the plot further. It’s a rare talent to possess, and that alone makes The Beast Must Die one of the all-time great detective novels. 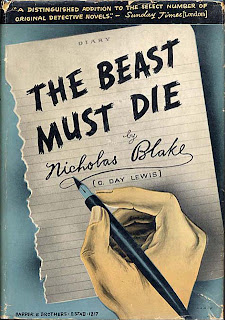 Note: I discovered, to my pleasure, that many Nicholas Blake titles are now available as Audiobooks on Audible. However, that pleasure quickly disappeared. If you value your sanity, stay away from these audiobooks. The Beast Must Die is a brilliant novel, and it was assigned the worst audiobook reader I’ve come across since Davina Porter read An Unsuitable Job for a Woman. Here... is a... sam-ple... of the kind of aw-kward... enunci-a-tion... and… pauses… you get throughout, complete with absolutely bizarre… em-phasis… that adds nothing... to the reading and really only serves as... abrupt… in-terruptions... The reader is one Kris Dyer, and he pissed me off so much that I turned the blasted thing off well before the halfway mark of the book. I had no intention of having it ruined for me. It sounds like the reader is either a wannabe Gary Oldman, or he came to the job high on some sort of experimental drug. So if you value your sanity, please please please stay away from these audiobooks: I’ve suffered enough pain for both our lifetimes, whoever you are.