Ashes to ashes, dust to dust... 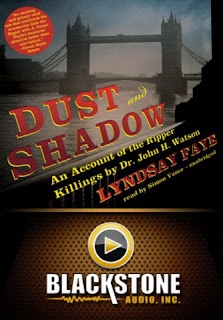 A while back I went on a lengthy tirade against the Edgar Awards and Agathas, lamenting how far they have sunk and how they have become little more than a reflection of bestseller lists. It was a controversial post, generating more comments than any other post in the history of this blog. Out of all these comments, one I remembered particularly recommended Lyndsay Faye’s Dust and Shadow, a Sherlock Holmes vs. Jack the Ripper yarn. This came about because Faye had been nominated for Best Novel for The Gods of Gotham.

I generally stay away from Holmes vs. the Ripper novels. It’s a tired idea with little novelty behind it, and it seems that every other such book concludes that the Ripper murders were the result of a ridiculous conspiracy centered around Prince Albert Victor. This is based on a highly flawed idea proposed by Stephen Knight in Jack the Ripper: The Final Solution, but it somehow has gotten to be the most popular theory in the realm of fiction. I don’t get it – I thought it was a stupid solution the first time I heard it, and when I recently read up on the Ripper case I found out just how stupid a solution it really is.

To her credit, Lyndsay Faye stays away from that idea and proposes a different solution to the Ripper crimes. She also manages to craft a complex story full of plot twists and turns. To her discredit, she turns to another often-seen solution and despite having a complex plot, it often feels like absolutely nothing is going on.

This is largely due to the writing style. It is stagnant, for lack of a better word. It somehow sucks all excitement out of the story. For crying out loud, this is a good story! At one point Sherlock Holmes himself is considered a suspect by the yellow press, and has to clear his own name! He gets into a fight with the fleeing Ripper, who wounds him! But instead of sitting on the edge of my seat, I was struggling to stay awake. It took me more than two weeks to get through this book. I’m a fast reader. I like reading. For me to take this long with a book, when I have no obstacles in my way, is never a good sign. 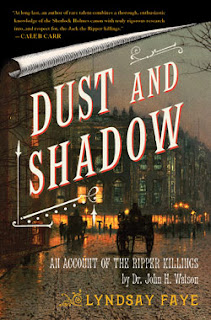 I also didn’t like a major character, a female prostitute named Miss Monk. She merrily skips through the pages of this book, disguised as part of the plot. But really, her role is far from necessary. All she does every once in a while is stroll onstage, tell Mr. Holmes something clever, listen to Mr. Holmes tell her what a clever girl she is, and then skip merrily off to be clever once more. The novel is a Sherlock Holmes novel, but I got the feeling Faye liked this character more, and I frankly expected her to join arms with Oliver Twist and break out into a musical number any moment. Her character accomplishes nothing, but right from the start you know that the final showdown with the Ripper is somehow going to threaten her life.

Since we’re on the subject of the Ripper, let’s talk about him. The solution is not the most obvious one, but it’s close. I was never fond of this fictional solution, although it is a bit more plausible for the real-life case. But here, it’s just badly done. All Holmes needs to do is tell Lestrade “X is your man”, and one police raid later, it’s game over. But no, apparently the solution is so shocking that it took Holmes weeks to even conceive of the solution’s possibility. (It really isn’t that shocking at all.) But even once Holmes has figured it out, does he tell anyone? Nope. Because the solution is so shocking that we need to endanger more lives by not telling the police who to chase down because it might unravel the very fabric of English society! This leads to an final showdown that is so avoidable it is depressing.

And unfortunately, these problems severely affect the book as a whole. I just can’t work up one iota of enthusiasm for this book. It starts with the end to what would have been a terrible Holmesian pastiche and works itself into a ridiculous Ripper yarn from there. At the end of the day, I just didn’t enjoy myself. I didn’t like the writing style, I didn’t care for Faye’s new characters, and although I thought the plot had its moments of interest the third act sabotages everything that came before. The only good thing is that it avoids the most tired solution in the game, but that’s faint praise indeed. I just cannot recommend this book. It’s not one for the Hall of Shame, but it’s ensured that I won’t be picking up Gods of Gotham any time soon.