Mr. Holmes Goes To The Vatican 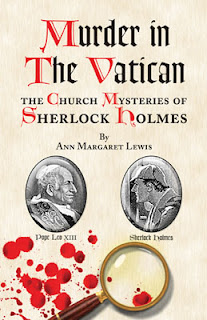 One of the most intriguing aspects of the Sherlock Holmes canon is, for me, all the untold adventures that Dr. Watson alludes to but which are never given the full-length short story treatment. And I’m not alone in thinking this. Many, many authors, from Anthony Boucher to William L. DeAndrea, have taken cues from Sir Arthur Conan Doyle and come up with their own original Sherlockian adventure, based on a reference Dr. Watson made in the canon. And one of the newer efforts has come from Ann Margaret Lewis, author of Murder in the Vatican: The Church Mysteries of Sherlock Holmes.

Published in 2010, this book brings Sherlock Holmes to the Vatican, at the time of Pope Leo XIII’s reign. This is a brilliant idea because, well, Pope Leo was an extraordinary man in many ways. He made it crystal clear to critics that the Catholic Church was not opposed to science and indeed co-existed with it, and Sherlock Holmes is infamous for his scientific mind. The meeting of these two men is very, very appropriate and the author manages to spin three tales out of their encounters.

The first story in the collection is The Death of Cardinal Tosca. One of the most intriguing references in the entire canon, Lewis manages to do it justice. The title is fairly self-explanatory: when Cardinal Tosca meets his untimely death, Pope Leo XIII summons Sherlock Holmes and Dr. Watson to investigate the crime scene. A mysterious woman who came to visit the cardinal may have had something to do with the murder, and so Holmes and Watson are off to investigate… Eventually, the villain is unmasked in a remarkable scene where the killer pours out all of his bigoted hatred against religion in general and the Catholic Church specifically. It’s a very well-done story, if a little bit elaborate in setting up the murder plot.

The Vatican Cameos is the second adventure, and I think it’s my favourite one. After the adventure in the Vatican, Dr. Watson decides to ask Holmes about the previous Vatican-related mystery he investigated, the little affair of the Vatican cameos. Holmes suggests contacting the Holy Father about the affair, since any account given by Holmes would inevitably be dry and scientific, devoid of the colour of Dr. Watson’s tales. And so Pope Leo sends along his personal journal, where he recorded the events of the case. So apart from the opening and closing narration, the entire story is narrated by Pope Leo XIII himself. 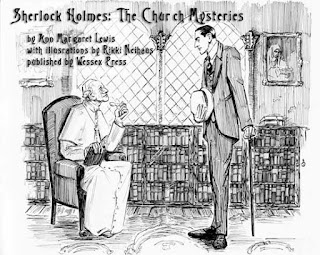 It’s an interesting story. Wanting to build a Catholic cathedral in England, the Pope decides to send Queen Victoria a gift in order to convince her that the Catholic Church is not an enemy of the state and hopefully get permission for the cathedral. Someone hits upon the idea of sending Victoria a fine collection of cameos, as she quite likes this kind of jewellery. So the cameos are sent off to England, complete with a note from the Pope himself… but when the case is opened, the cameos are gone, apparently having vanished into thin air! Naturally, the queen is not amused, and so Sherlock Holmes is sent to the Vatican to investigate the matter…

What I really liked about this story is the transformation of Sherlock Holmes. At the start of the story, he is dismissive of religion and regards it as a silly pastime. He refuses to show the Pope any sign of respect, citing his loyalty to Queen Victoria but instead being fuelled by a staunchly anti-religious stance. He and Pope Leo debate the whole question of religion, and by the end of the story, Holmes comes to respect the Pope. He doesn’t become a member of the Catholic Church, but he earns some respect for it and its leader, and the two become close allies. We even find out that Pope Leo helped Holmes in a time of great need later on in the great man’s career! All this makes for very interesting reading, without feeling as though the author is preaching a sermon disguised as fiction.

The third adventure is The Second Coptic Patriarch, and in this tale Sherlock Holmes comes face to face with a legendary master thief… Flambeau! That’s right, the Flambeau of the Father Brown stories. And he’s come to Holmes with a terrible problem: Father Brown has been arrested for a murder, a murder that Flambeau knows the priest did not commit. But the good priest stubbornly refuses to say anything about the case, leaving the police with no choice but to arrest him. Flambeau wants Holmes to investigate the affair and clear Father Brown’s name.

This is a good story, but it does run into a chronological problem. The time period it is set in predates The Blue Cross, in which Father Brown first met Flambeau. The story is set in 1898, and the first Father Brown story appeared in 1910. Not only that, it wasn’t until a later story that Flambeau finally gave up his ways of thievery. So there is a big time paradox in the story. However, if you can allow for a one-time miracle space-time continuum exception, this isn’t a big deal. The authors gets all the details about Flambeau and Father Brown right, but the chronology is off in order to fit them into another Holmesian adventure. It’s a paradox I can forgive.

So let’s set that paradox aside and focus on the story itself. What you will find is a surprisingly good adventure, based on some genuine facts, with a solution that I sort-of guessed without being able to explain any reasoning behind my guesses. It’s a pretty good story and ties neatly into another Holmes adventure. 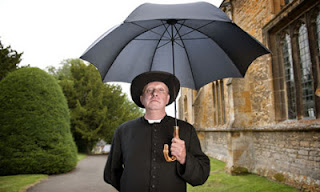 And that’s Murder in the Vatican. I think it’s an excellent book. It has elements of theology and religion, but above all these are stories of mystery and detection in line with the Sherlock Holmes canon. Not only that, the author demonstrates a surprising knowledge of detective fiction in general. There’s a wonderful reference, for instance, to a story by Dorothy L. Sayers in which a young Lord Peter Wimsey came to consult Sherlock Holmes about his missing cat. In an age where most of the contributors in Books to Die For seemed under the impression that the genre began in the mid-80s or early 90s, it’s absolutely wonderful to see an author who knows about such a story to begin with and can effortlessly fit it into a Sherlockian pastiche of her own.

And finally, there is a positive portrayal of the Catholic Church, something I’m very, very glad to see! I’ve begun to keep track of the evil nuns and pedophile priests I’ve encountered in my fictional ramblings in 2013, and the score is quite high. The one exception to date has been an orphanage full of kind nuns in Margaret Millar’s A Stranger in My Grave— apart from that, it seems that all priests and nuns are evil, especially if the novel is set in the Boston area. And so it was very nice to encounter a positive portrayal of the Catholic Church, a portrayal that shows that good men and women are part of the Church. And the Pope, instead of being portrayed as a geriatric megalomaniac, is a kind, reasonable, and intelligent man whose shrewdness and intelligence earn him the respect of Sherlock Holmes himself: no mean feat, that!

All in all, this book comes highly recommended.