Written by Patrick
“You're a young man, you can still learn. Pay attention to this. You can steal in this country, you can rape and murder, you can bribe public officials, you can pollute the morals of the young, you can burn your place of business down for the insurance money, you can do almost anything you want, and if you act with just a little caution and common sense you'll never even be indicted. But if you don't pay your income tax, Grofield, you will go to jail.”
—Littlefield, The Score 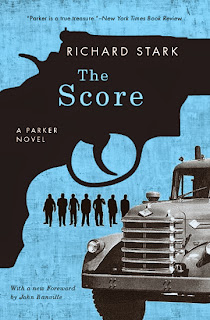 It was a crazy idea, and Parker knew it from the start. At first, he didn’t even want to get involved, but the guy who came up with the plan was persuasive. Edgars had apparently planned for every eventuality: all the bases were covered, and all he needed was manpower. Anything that could go wrong was accounted for, and the payoff was so high that Parker finally gave in against his better judgement. And the plan? Parker and his cronies are going to rob an entire town.

Yes, you read that right, and if you’re scratching your head, please remember that the book in question, Richard Stark’s The Score, was written in 1963. The plan would probably be impossible to pull off in this day and age of cellular communications. But even in the 60s, the plan is a difficult one to swallow. In order to make this fantastic setup plausible, Richard Stark (a pseudonym of Donald E. Westlake) has to explain the plan, the contingencies, the risks, and the potential payoff to you at length. The heist itself does not begin until the second half of the book, and the first half is largely devoted to these explanations and preparations. The plan has to be adjusted several times. If this sounds boring, don’t be fooled – this is a very short book; the sparse, crisp, to-the-point writing style helps this section whizz by as you marvel at Parker’s strategic genius. 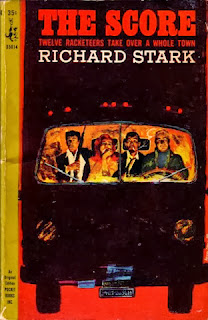 But it seems that Parker’s plans are always cursed to fail (or at least, they’re much more difficult than they at first seem), and this time around you get the feeling that the plan will fail in some way. You get little hints here and there that one of the crew members (I won’t say his name, but it’s obvious which one) is not trustworthy. You get the feeling that he’s planning to do something crazy, but you’re not quite sure what it will be. And sure enough, the plan gets seriously derailed… but I dare not say more.

The other thing about The Score is that it’s an interesting change of formula for Parker. As much as I love these books, there is a very definite formula to them, established in the very first book (The Hunter). Parker plans a heist with an apparently-perfect plan, except one of the team members can’t be trusted. The heist goes great, but then Parker gets double-crossed by the guy he pegged as untrustworthy. The guy stupidly hasn’t managed to kill Parker, who goes on the hunt to get his share back and to pay back the traitor for having broken the rules. (The formula also allows Westlake to use what Nick Jones has dubbed the “Stark Cutaway”, in which you first see events from the POV of Parker’s quarry up until the moment Parker rises out of the shadows to exact his revenge. You then cut to Parker’s POV and see how he got there.) It’s a brilliant formula when done well, and Westlake had the imagination to do several interesting variations with this formula. But sometimes it’s nice to break away from it, and that’s what The Score does. 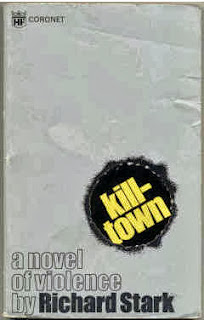 This is a heist novel, pure and simple. It concerns itself with the intricate planning, the way the crooks go through the town and take care of all those who pose a threat to the operation. It’s ingeniously-planned, and as someone who enjoys plotting, I loved seeing the pieces of the puzzle slowly slide together in this one. A double-cross of sorts takes place in this novel, but it’s an entirely different double-cross from the ones we’ve seen previously. OK, now I really risk saying too much. Let’s change subjects.

A character named Grofield is introduced in The Score, and Westlake/Stark would bring him back for a few standalone novels later on. He’s a good character, plenty of fun and somewhat more human than Parker.

Which brings me to Parker. Let’s talk about him. This character is The Exception. Writers, publishers, critics, etc. will insist that you cannot write books about genius detectives nowadays, because readers expect a main character who is sympathetic, complex, and relatable. Parker is none of those things. Parker is a monster. His only remotely human quality is his sense of humour, and even that is a dark, sardonic humour with sharp teeth. His mind is analytical and he operates only under the rules of logic. He knows what he wants and he will do precisely what it takes to get it. He’ll avoid murder because the law punishes killers more harshly than thieves. But if it takes murder to get what he wants, he will commit that murder, be it the murder of a tough gangster or an innocent wide-eyed child. And yet, despite that, there is something fascinating about this character. He is amoral, yes, but he isn’t a sadist; he just knows how the world works and he refuses to play along in the game of common decency that society has invented. 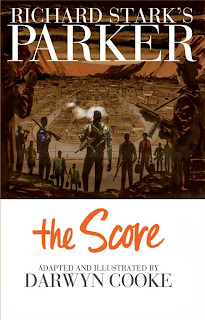 There’s something deeply fascinating about the Parker novels, and I still haven’t quite pinned down what it is. (I suspect Freud would love to have me as a patient.) I’m still surprised that I love the books the way I do. Parker is the kind of man who would terrify me in real life, but when Donald E. Westlake writes about him, I find myself fascinated by this man. I don’t share his sardonic view of the world, but I have to admit he’s a man of his convictions. The Score is yet another worthy addition to the series, and I can highly recommend it.

However, these books are not for everyone. They are brief, tough, dark and explosively violent. And Parker doesn’t give a shit about being politically correct, especially where dames are concerned. He knows how the world operates and he’s just around to protect his own interests. It doesn’t appeal to everybody, but these are excellently-written books. If you haven’t made Parker’s acquaintance, give The Hunter, the first book in the series, a shot. It might catch you off guard as it did me.

Note: If you haven't bookmarked this site yet, you seriously should: The Violent World of Parker has a veritable cornucopia of information on all things Richard Stark and provides far more intelligent commentary than I could ever hope to give. It's also the source from which I shamelessly stole the covers that illustrate this review.

Of particular interest to this review is an introduction to The Score written by William L. DeAndrea, another author I highly admire. If I haven't convinced you to give this series a try, read what DeAndrea had to say about it.

The Score was also published under the alternate title Killtown. It's also been adapted into comic book form by Darwyn Cooke, who has also adapted other Parker novels into comic book form. The project was given Donald E. Westlake's blessing, and these are apparently faithful adaptations. If anyone has read them, I would appreciate any comments you might have.