Of Gangsters and Outlaws 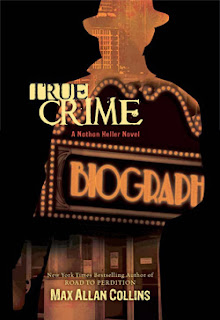 Private eye Nate Heller is now in his second year of operations. His first year was described in detail in the novel True Detective, and all things considered it was a good first year. Unfortunately, Year Two has been much more quiet, with clients few and far between. After all, it is the Great Depression, and Heller has been watching the proceeds from his first year slowly dwindle…

And then he gets a case. It all starts when a shifty guy named John Howard comes to see Heller at his office. Howard is a travelling salesman who is worried that his wife, a pretty girl named Polly, is having an affair while he’s on the road. He pays Heller an exorbitant $100 in advance to follow Polly around and to determine whether or not she is being faithful. But right from the start it’s an odd job… and after a while, Heller finds that Polly is seeing a man all right… and that man looks remarkably like John Dillinger.


Before long, Heller is embroiled in a conspiracy directed against John Dillinger, leading to the fateful events outside the Biograph Theatre, which are of course well-known to true-crime buffs. That’s only the first half of the novel, which is quite a complicated affair. I daren’t say much more about the plot for fear of spoilers. All I can safely say is that the second half deals with a case that seems to be completely separate from the first half, but they end up entwining ingeniously. The long and short of it is that even if you know a lot about the historical era, Max Allan Collins might have a surprise or two in store for you. True Crime is a carefully researched novel full of suspense, action, and even one or two unexpected twists.

Rather in keeping with True Detective, True Crime is a massive book, and its length could easily scare away readers who share my tastes. I’m of the opinion that many recent novels are bloated beyond all reason; many authors bring their plot grinding to a halt in order to update you on the detective’s erectile dysfunction and the latest on how Captain O’Hooligan is still after his skin because of events explained 5 books ago.  As a result I tend to stay away from several popular contemporary writers. But this series is an exception. Throughout True Crime, Collins keeps the focus on the mystery Nate Heller is investigating. And although his personal life plays a major role in the proceedings, it’s never used exclusively as padding. Heller’s personal life influences his actions while on the job; likewise, the job itself can have a tremendous impact on Heller’s personal life (and brother, does he ever get a nasty blow at the end of this book!). The point I’m trying to make in my confused, tangential way is that Heller’s personal life is used to develop the character, but it’s also very important to the story itself. If you took out this angle of the book, you might shorten the page count, but you’d also make the book much duller and you’d remove some plot points. 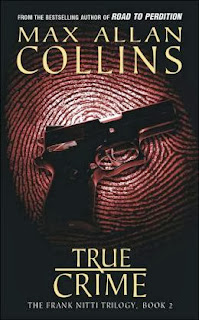 Heller himself is a masterwork, in my book one of the finest detectives introduced in the 1980s. The character is complex and fascinating. As Chicago cops and PIs go, Heller is an honest one. But he’s not perfect. He has no trouble with the occasional bribe. For instance, when Frank Nitti offers him two fifty dollar bills to turn a blind eye to certain events, Heller takes them. As he explains: “A braver man would’ve tossed them in Nitti’s face. He’d also be a dumber man, and possibly a deader one. Maybe if I had the integrity Nitti was talking about, I’d turn the bills into confetti and toss them out my office window; or give ’em to the first down-and-outer on the street I ran across. But I needed a new suit, so I went out and bought one. The rest of the money could go for luxuries. Like eating and the phone bill.” But even though Heller takes the odd bribe or two, he has some decency and some lines he does not cross. He refuses to co-operate with premeditated murder (which is why he left the police force in True Detective). And in general, he tries to do as best a job as he can in a corrupt world, where politicians and criminals do business behind closed doors. In a conversation near the end of the book, one of Heller’s friends offers this insight into his character: “Yes, right, and that’s why you are a detective—you want to put this messy world in some kind of recognizable order. And that’s of course impossible. But you do seem to manage to tidy up an occasional corner, now and again, you know.”

For the mystery fan, the Nate Heller novels are a must-read. True Crime is the second in the series, and it is just as stunning as the novel that came before it, True Detective. It has a terrific storyline, with several unexpected developments. The research is careful and Collins’ attempts to recreate the atmosphere of 1930s Chicago are very successful. Nate Heller is not only bumping shoulders with historical figures, he’s also investigating some famous crimes. And Heller himself is a fascinating, complex character, who makes each novel a delight to experience. His narrative style, heavily influenced by the likes of Phillip Marlowe and Mike Hammer, is crisp, to the point, and often produces memorable one-liners. In short, although the novel is long, it never feels long. And it’s overall a delight to experience.