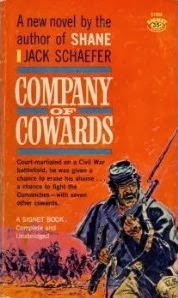 The time period is the American Civil War. As the fate of the United States is being decided on the front lines, heroes are born… and sometimes, good men falter. Such is the case with eight of the soldiers, court-martialed and convicted of cowardice. The military decides to conduct an unusual experiment, and gives these men their own separate company, Company Q.

Shunned and despised by their fellow soldiers, Company Q is led by Jared Heath, a former captain whose conviction came as a result of his refusal to obey a direct order. They’re nicknamed the Company of Cowards, and their unusual story is chronicled by Jack Schaefer, the author of the legendary novel Shane.

Well… that might be a bit misleading a description. This isn’t so much “their” story, you see. In general, Company Q is painted in a few broad strokes, with a few interesting characters being given very little “screen time” and not really being developed all the much. But it’s sort of the point: this isn’t the story of the company as a whole, but the story of its leader, Jared Heath. And his story is good enough to forgive the book’s few shortcomings. 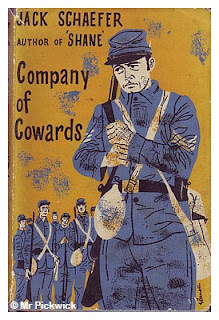 You see, Jared Heath was convicted of cowardice because he refused to issue an order that would have gotten his men killed. He was arrested, the order was issued anyways, and the casualties still happened. Nothing really was gained, and all that has happened for Heath is him getting stripped of his rank and humiliated by the army. His father writes to him and tells him that his cowardice is well-known all over town; his family is being ridiculed and humiliated, and they never want to hear another word from him again.

You might think to yourself that all this is rather unfair. After all, Jared was using his brain, employing military thinking. Unfortunately he was being ordered around by an idiot. Right? Well, if only Jared was convinced of that. He offers no defense of his actions and just wants the whole ordeal over and done with. He has no idea whether he truly is a coward or not, and the possibility that he was acting out of fear haunts him. He wants to learn once and for all whether he is a coward and a traitor or not. And this fascinating premise is the central conflict of this book. It’s a vivid portrayal of a man who forms a company of men who will follow him through the gates of Hell and right into the jaws of Death itself.

Believe it or not, Company of Cowards is actually a Western. Considerable time is devoted to the soldiers and their backstories, but they eventually find their way at the Western front, and the climax of the novel takes place in the wild, untamed West. It’s an excellent action scene, and it’s a good way to end to book. 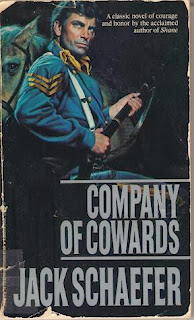 I like Jack Schaefer’s writing style. He knows how to employ the vivid metaphors and turns of phrase, and he knows how to create conflict and tension. The book is well thought-out, and in an afterword, Schaefer describes how he was inspired to write the book and the research he did in writing it. Overall, I think Company of Cowards is a very good read.

I don’t think Company of Cowards is as great a book as Shane was, but so few books are. Shane is one of those one-of-a-kind books that must be experienced, and that automatically makes any comparison start off on unequal footing, and that’s probably the worst thing about this book: you know that as good as this book is, the author has written a book that is not just good, but one of the best. If this book has been written by anyone other than Jack Schaefer, I might have enjoyed it a bit more. But throughout the book, I kept noticing that as good a character as Jared Heath was, the others were rather hasty sketches that I wanted to learn more about, and comparing this to the vivid characters that Schaefer wrote about in Shane. It was only when I got to the end that I realized that that was the whole point. Company of Cowards might not be a great book, but it’s good enough that, if this were my first Schaefer novel, I would want to read more. And I'll probably still read Monte Walsh during this mystery hiatus.