Written by Patrick
Well, another day has gone by here at the scene of the crime, and I have gotten one step closer to world domination. A lot of exciting things have happened over here in the last couple of weeks, and I’d like to share the good news with my blog readers. 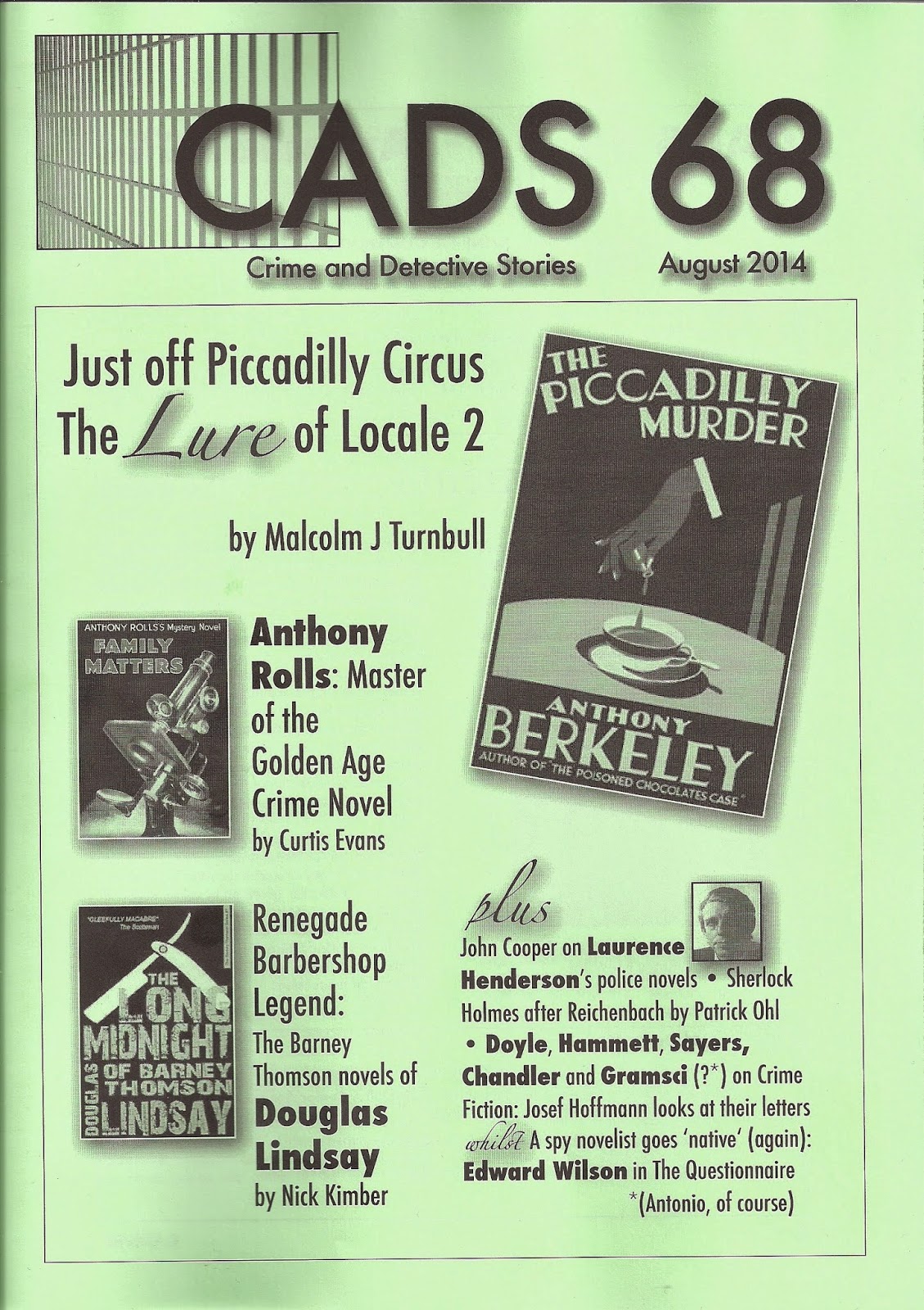 First off, I’m very pleased to announce that I’ve written an article featured in the new issue of CADS, CADS 68. This periodical is edited and published by Geoff Bradley, and it’s my favourite place to go for all sorts of delightful articles on vintage detective fiction, crime fiction, etc. My article is entitled Was the Cornish Boatman Correct? The Post-Reichenbach Career of Sherlock Holmes. In it, I examine the Sherlockian Canon to see if there’s any truth to the old adage that Holmes may not have died at the Reichenbach Falls, but was never quite the same man afterwards. I’m very pleased with the way this article turned out, and I hope those who read it are as interested in the topic as I was.

But there’s just one more thing. Curt Evans, blogger at The Passing Tramp and author of such fine books as Masters of the Humdrum Mystery and Clues and Corpses: The Detective Fiction and Mystery Criticism of Todd Downing, has edited a new book. The book is called Mysteries Unlocked: Essays in Honor of Douglas G. Greene. It is published by McFarland and it is a tribute to Douglas Greene on his 70th birthday. Doug has enjoyed a long career as an outstanding mystery scholar, the foremost John Dickson Carr authority, an outstanding editor and a fine publisher. I was delighted when Curt contacted me and asked me to contribute a piece to the book. My contribution is a piece about one of my favourite writers, René Reouven, in which I examine his career as an author of mysteries, especially his “apocryphal crimes” and Sherlockian pastiches.

Because I’m one of the contributors to Mysteries Unlocked, I cannot “properly” review it, but I truly believe this is a book worth talking about. This contains some of the finest mystery criticism I’ve ever read. The contributions are intelligent, insightful, and just as diverse as Doug’s career has been. Here are just some of the highlights from the book, delicacies you can expect to sample from a veritable smorgasbord of contributions: 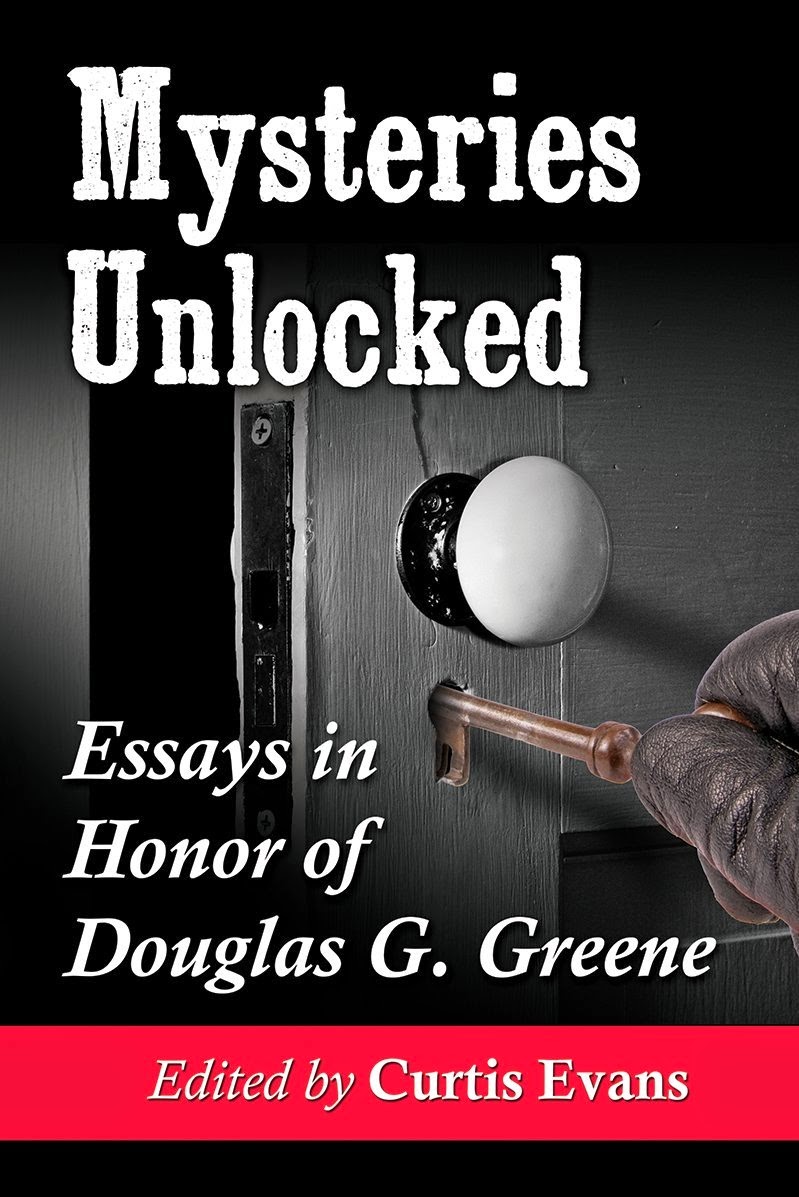 There are some fine contributors to this volume. There are Edgar winners and nominees, professors, lawyers, philosophers, biographers, a physiotherapist, a Pulitzer Prize winner… and somewhere among all these contributors you’ll find some schmuck from Canada. Seriously, though, it is an honour to be included in the same book as Jon Breen, Peter Lovesey, Michael Dirda, John Curran, and so many others. I loved reading this book, and it made me very proud to be a participant in this festschrift.

I have never had the pleasure of meeting Doug Greene personally, but we “met” online a few years ago now thanks to the Yahoo group “Fans of John Dickson Carr”. How did that happen? Funny you should ask. I was 16 years old at the time, and came up with a theory about John Dickson Carr’s The Burning Court all on my own, and was so proud of its brilliance that I simply had to share it with the group (beware, major spoilers below!!!):

I finished reading "The Burning Court" a few weeks ago, and the ending *still* has me thinking, to the point where I couldn't even start reading another Carr.

What I'm wondering is, could Carr have made a mistake when it came to the solution? I know it's his book and all, but who says you can't have a little fun interpreting a work?

The rules of fair play themself are violated by making Stevens' wife, Marie, a ghost who finally got revenge by killing Uncle Miles and Mark. After all, Gaudan Cross gave a perfectly reasonable, physical explanation for how the murder was committed. It would've satisfied anyone. But Carr goes a step further, killing off his detective and adding a further twist.

So, what if Carr got it wrong, and Marie wasn't the killer after all? What if her thoughts were really the mad ramblings of an insane woman who can't be saved? What if Cross' explanation of her upbringing WAS correct, and she had been "brainwashed" to believe Marie D'Aubray would reincarnate in herself?

Anyone else have any thoughts about this? Did Carr "make a mistake", or was she really the killer all along?

Date: August 22nd, 2009
I suggested a similar alternate explanation in an appendix to the biography.

Keep in mind that Ted Stevens of Herald publishers (I think it was Herald) is still very much alive at the time of PANIC IN BOX C.

***
This was when I first realized that Doug Greene, the guy who wrote JDC’s biography, was part of the group! I was thunderstuck – Carr’s bio was one of my favourite library books, although I had not read any sections marked as spoilers that were about books I had not yet read. I quickly dashed off a reply:

From: Patrick
Do you mean "The Man Who Explained Miracles"? I read through as much of it as I could, and positively loved it! I admit that I skipped through passages that referenced books I hadn't read (I still hadn't read "The Burning Court" when I read it), but I plan to read the extra passages that I now can.

I hope you don't mind my saying so, but after I read what I could, I hoped I'd be able to one day tell the author how much I enjoyed the book. It's really an honour to be speaking (well, in a way) to you. I enjoyed the book tremendously. Thank you so much for writing it!

Well, Doug, I’m no longer 16 years old, but my sentiments remain the same. Thank you so much for all the great work you have done throughout the years for us mystery fans. Thanks for the JDC bio, for the great short story collections published by Crippen & Landru, and for all the reading tips you have given me in the past, which have transformed me into the reader I am today. It was an honour participating in this project!