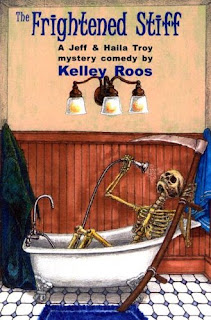 Here I am in a Comfort Inn in Beloit, Wisconsin. And, as luck would have it, it turns out that there is access to the Internet here! So the blogging community can be treated to a post today after all!

Kelley Roos was the penname chosen by the husband and wife collaboration team of William and Audrey Roos. They took William’s last name and combined it with Audrey’s maiden name to create this literary alias. And it was under this name that they wrote a series of mystery novels starring the husband-and-wife team of Jeff and Haila Troy. I have just finished my first Roos novel, The Frightened Stiff, and it was such a delight it single-handedly guarantees that I will read more!
I will be brief: The Frightened Stiff is a wonderful read. It is such a rare and immeasurable delight to come across a novel of this calibre and character. Every single page constituted a delightful experience, and it simply oozes with delight.
The Frightened Stiff revolves around Jeff and Haila Troy moving into a new apartment, which, as it turns out, was a favourite speakeasy of Jeff’s back in the Prohibition days. Things go wrong from the get-go: their furniture fails to arrive on time, they overhear an unsavoury character making an appointment to meet someone in their apartment, and the following morning, Haila is woken up by the police banging at her door, who inform her that there is a dead man in their garden, apparently drowned in the Troys’ tub.
What follows is a mad comedy of errors as the Troys suspect everyone in the house is hiding something. Not only that, there is an impossible crime angle thrown in! How is it that an apartment on the top floor can be stripped of its furniture without anyone noticing? I am happy to say that the answer to this riddle happens to be extremely satisfying and fairly clued—and it manages to be very clever.
Unfortunately, there’s a problem. There is literally nothing that points in X’s direction as the culprit. It seems that he (or she) was randomly chosen by drawing names from a hat. In fact, the summing up scene directly evades this sort of question, which ultimately makes the solution both excellent (with its impossible crime) and disappointing (with its killer). There are also one or two scenes whose purposes are never explained.
Despite this glaring flaw, this book is of undeniably high calibre. It is a wonderful comedy, as the Troys banter their way through this unfortunate mystery. After all, it was their garden—they have a right to know which of their neighbours delivered a fresh corpse to their door.
In fact, the Troys prove to be the book’s greatest asset, providing it with a high spirit very few books can rival. I liked them far better than Agatha Christie’s Tommy and Tuppence, for instance. I got the feeling that the Rooses enjoyed collaborating with each other, and this must have transferred onto the page. Jeff and Haila positively radiate youth, energy, vivaciousness, and a love of life in general. You get the feeling that they’re very much in love, and for them, that’s all that matters. And the incurable romantic in me finds that wonderful.
The Rue Morgue Press has brought back much of the Roos’ work into print, and thank goodness for that! Illustrator Rob Pudim does a fantastic job with this cover—whatever mad genius Nicky Zann channels regularly finds its way into Pudim’s work as well!