A Sincere Thank You

Written by Patrick
(Note: I’ve now enabled Anonymous commenting—so if you hesitated to say anything because you didn’t want to register, you no longer have to! On a more sombre note, Blogger has experienced technical difficulties, and as a result, my post from Thursday on the Bill Pronzini novel Scattershot has been temporarily lost. Because of this, I’ve delayed posting a review of Margery Allingham’s The Case of the Late Pig. But, since I have no patience and I also wanted to post the following message, I’m going to put these posts up and sincerely hope that my Scattershot review will return. If not, I will just have to repost it myself— turns out backing it up was a smart thing to do.)
Today, May 14th, I turn 18. Funny, the words have only just managed to sink in… Some of you may not have known how old I am. For some it may come as a surprise— I’ve often been told I sound a lot older in my writing. 18 years—and hopefully, there will be many more, full of mystery and mayhem, ahead! 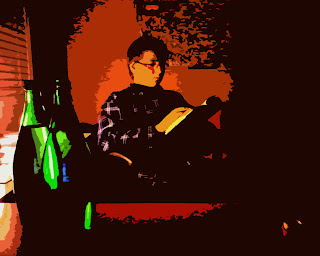 As I reflect on the last few years, I smile as I recall how important my love for mysteries has been. I picked up my first John Dickson Carr novel, The Three Coffins, in April of 2008, and read it over the weekend (the final weekend of the month). I instantly fell in love with his work: the cunning craftsmanship, the sublime way he handled clues, how he led readers up the garden path, his clever impossible problems and the satisfying explanations behind them…
It was over a year later, having read a little over 20 of his books (which were almost impossible to find in any store, and just as hard to get through the library) that I timidly posted a message on the Yahoo! group “fansofjohndicksoncarr”, introducing myself as a huge fan of Carr’s work, despite having read only a fraction of it.
I remember how I proposed an alternate interpretation of the ending to The Burning Court. I was then informed, much to my surprise, that this was discussed in Doug Greene’s book The Man Who Explained Miracles, a biography of Carr. When I first read it, I skipped over passages dealing with books I hadn’t read, and The Burning Court was one of them. However, I read most of it, and I enjoyed it thoroughly. (To date, it remains one of the best literary biographies I’ve ever read.) I also remember being flabbergasted that the author himself was part of the group, and I eagerly took the opportunity of thanking him for writing such a marvellous book.
Ah, I even recall when I first found a marvellous bookstore in a nearby town. I found it entirely by accident, when Google insisted on showing me used book dealers in neighbouring cities one day, although I specifically asked for ones in my city. It turns out Google was on to something—I discovered in the store’s online catalogue at least 10 pages of titles by Carr! I eagerly e-mailed the store in question to reserve five titles (which, looking through my old e-mails, I re-discovered were: Castle Skull, The Emperor's Snuff-Box, The Man Who Could Not Shudder, The Nine Wrong Answers, He Wouldn't Kill Patience.) When at the store, I found that it also had an entire shelf full of Carr’s books, and on impulse, I bought two more: Dark of the Moon and Night at the Mocking Widow. I’ve made countless trips there since, acquiring almost all of Carr’s books, and piles of books by Edmund Crispin, Ellery Queen, Rex Stout, and others. 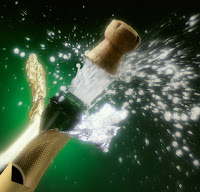 In the last few years, I’ve managed to become acquainted with many people from all over the place, mystery aficionados who have, in one way or another, helped make me the mystery lover I am today. I sincerely thank you all for putting up with my ramblings as I continue to discover for myself the wonders hidden in the Golden Age and the post-GAD works that rise above the bleak, dreary norm. I also thank those of you who took the time to give me advice when I tried writing an impossible crime story of my own – I haven’t given up on it, but it’s tough going. I can only hope something will eventually come of it.
At this point, I would like to raise a glass and propose a toast. However, I still have a year until I can legally consume alcohol. So instead, I’ll raise my Perrier and hope the toast still counts: to the Golden Age of Mysteries, and to a Silver Age down the road!!!
Once again, thank you to all!