We'll meet again-- sorry, what IS your name anyways? 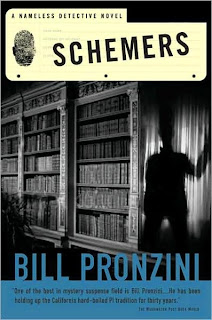 This is the third time I’m reviewing a novel by Bill Pronzini, and it’s a surprisingly recent title: Schemers was published in 2009. (What's next? Reading P.D. James and Dan Brown?) I’ve had several people recommend this book to me, and by coincidence, it was one of the two Nameless titles I checked out after I read Hoodwink. I just registered the words “locked library” and “ultrarare detective fiction titles” and thought to myself “Sold!”
Actually, this is an interestingly different book for Pronzini, from what I've read at least. Three different plotlines chase each other throughout this book, and they are told through four points of view. At the start of the chapter, there will be a name (unless Nameless is narrating, in which case it’s left blank). Throughout that chapter, everything will be told from that person’s vantage point. And so, we get four different characters participating in three different plot lines.
The first chapter starts with someone identified only as “Schemer”, who goes into a graveyard at night, digs up the grave of one Lloyd Henderson. This schemer apparently has it in for the old man—he burns the urn containing his ashes with acid, and then throws some acid on the man’s headstone. He then snaps some pictures, spits on the grave several times, and props up a cardboard sign: THIS IS JUST THE BEGINNING.
Enter our main gumshoe, Nameless. He is no longer the solitary “lone wolf” he was in Hoodwink and Scattershot. I’m not too sure what happened in between these books, and since there is a huge list of titles separating them, I’m sure it was a lot. But Nameless is now the semi-retired founder of a detective agency, and listens to a young couple, the Hendersons, who come to him about an anonymous stalker. They have no idea why this man is after them, but he brutally assaulted Cliff’s brother Damon in his garage, and they all fear for their children’s safety. Jake Runyon, one of the operatives, takes charge of the case. Runyon’s part of the story is a major plotline, and he’s just as interesting a character as Nameless. He doesn’t indulge in first-person narration; in fact, nobody does that apart from Nameless. (I guess it’s a reserved privilege.) But Runyon is really a fascinating character, and his relationship with a woman who has half of her face paralyzed is truly touching. He shows he is intelligent, slowly but surely putting the pieces together to track down the faceless “Schemer”, a truly disturbing, flat-out psycho. This is not a classic mystery— you follow Jake along as he tries to piece things together, and sometimes, you’re given more information than he is through the chapters told from the Schemer’s point of view. But this is told with deft skill, outdoing counterparts in today’s field.
Besides, Bill Pronzini throws in a classic mystery plot just for fans of it like me. This second plot thread involves a rare book collector, whose main interest is rare detective fiction. Nameless spends some time marvelling at the man’s collection, one of the finest in the world. I can’t help but wonder if Pronzini used his own collection as inspiration here. It is described in just as loving a way as the old pulp stories in Hoodwink— the collector in question, for instance, opens his books a third of the way so as not to stress the spine too much (Hey! I do that too!).This collector, Gregory Pollexfen, reports the theft of eight volumes from his impressive collection, among the rarest in the world— some with inscriptions that up the value of the whole thing! Nameless is stumped—the library was carefully locked, with Pollexfen having the only key. The windows were barred. In fact, it seem like only Pollexfen could’ve done it to swindle the insurance company!
Trouble is, Pollexfen doesn’t need to swindle the insurance company! He is as financially stable as the Titanic! (Whoops! Wrong comparison! But in all seriousness, he really is very well off and has no need for the money.) Pollexfen himself, an ardent bibliophile, insists that the only thing that matters to him is having his books brought back. Nameless is stumped, which is when a locked-room murder takes place inside the library. You’re pretty sure from the start who is culpable, but the question here isn’t who, it’s how. The answer to the locked-room problem is a fine one, and the ending, when Nameless finally collects on a bonus from a very unsavoury character, is quite satisfying.
There is a third plotline, which I’ve saved for last because, well, I didn’t like it very much. It involves another of Nameless’ partners at the agency, Tamara. Now, maybe I’m being too harsh on her— I don’t know her backstory or anything of the sort. But at the same time, I couldn’t stand her in this novel. Here is a woman who proudly announces her sexual conquests to everyone, and doesn’t make it a secret that she’s only interested in the sex. She’s rather disturbingly self-centered and her casual sex rather put me off, especially when she started showing off about it. She struck one of three chords for me in this novel:
(1) “We need information, Tamara!” “Hey, cool, Google says this!”
(2) “WOOHOO! I’VE HAD SEX FOR THE FIRST TIME IN A YEAR, BABY! OH, YEAH! OH, YEAH!”
(3) “Where is Luuuuuuuuuuucasaaaaaaaaas? I wanna have seeeeeeeeeeeeeeeeeex!”
This plot thread also takes the least bit of time, with only a few chapters told from her point of view. I just didn’t like it very much at all, and the ending to this plot thread is horrifying— as unlikeable a character as she was, I wouldn’t wish such a fate on anybody.
However, I’m glad to report that, despite my problems with this character, it didn’t ruin the enjoyment of this book. I liked it very much indeed, with a genuinely suspenseful plotline and a good locked-room situation.