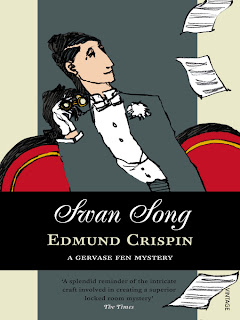 Robert Bruce Montgomery, alias Edmund Crispin, was more than just a mystery writer: he was also an influential mystery critic and (under his own name) a prolific composer. I love the story of how he decided to try his hand at mysteries: he read John Dickson Carr’s The Crooked Hinge and was so impressed, he decided to try doing something of the sort himself. And thus was born Gervase Fen, Professor of English Literature at Oxford. His name is a reference to Dr. Gideon Fell (they share the same initials) and Fen makes a remark in The Case of the Gilded Fly that establishes Fell as a real person sharing the Crispin universe with Fen. (In Swan Song, Crispin makes similar references to Mrs. Bradley, Sir Henry Merrivale, and Albert Campion.)
Swan Song is the fourth entry in the Gervase Fen series, originally written in 1947. It revolves around the mysterious death of Edwin Shortenhouse by hanging. Shortenhouse was a singer rehearsing for a production of Die Meistersinger, and was universally despised by his fellow cast-members, the musical director, etc. He was despicable, arrogant, and his presence poisoned the atmosphere in the theatre. So nobody really minded when he was found hanging… only the case for suicide doesn’t quite add up, and we’re left with an impossible murder! For the victim was alone in his dressing room, and a witness outside testifies that nobody went in or out...
The ultimate solution to the locked-room mystery is complex, but brilliant. Unfortunately, my edition, a Four Square book, spills the beans about whodunit on the front and back cover! Whatever editor thought he was being cutesy with his hints ought to be hanged, drawn, and quartered. Such a thing was entirely uncalled for, and it might have ruined my experience reading Swan Song. Once you’re given the hint, whodunit becomes painfully obvious, though I’m glad to say the bonehead responsible at least didn’t spoil the how. (This same cover for some asinine reason refers to one of the characters, Elizabeth Langley, as the victim’s co-star… when she is simply a journalist, and her husband is his co-star.) 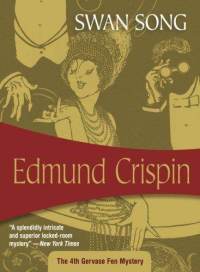 But let us forget the failings of the Four Square edition and focus on the novel itself. The theatrical atmosphere as the cast prepares for the performance is simply brilliant. It marvellously captures the chaos of backstage, the petty rivalries that result between rival cast members, the milling about in the wings, and all while death stalks in the shadows, preparing to strike again…
The characters are fairly interesting, too. I found myself particularly drawn to Karl Wolzogen, a German man with a fanatical love for the work of Wagner. The performance is important to him, because he wishes to see Wagner’s works performed one last time before he dies, and in his native Germany, Wagner is banned. Why, he asks, is Wagner banned just because the Nazis admired him? Hitler, he says, was a fan of Edgar Wallace, but England never banned his work. He is distrusted by the English and he distrusts them right back. Overall, this makes for a fascinating character, even though very little time is spent developing him. There is quite a bit of social commentary, particularly about Nazism. After all, this was 1947, and WWII had just ended. 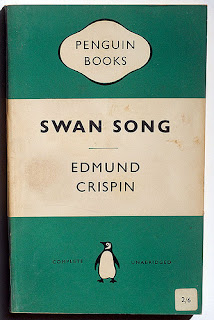 Edmund Crispin’s sense of humour, as always, is wonderful. He combines both farce and wit, and the overall effect is wonderful, whether Gervase Fen starts singing a sea shanty in the middle of his explanation for howdunnit, or whether composer Charles Shortenhouse tries warding off the monster that is his servant, Beatrix Thorn. Crispin also loved referencing all sorts of things, literary, musical, or whatnot. I admit I didn’t recognize half the literary allusions, but there’s always a little pang of triumph when you realise he cribbed this line from Hamlet, or Gervase Fen is quoting the White Rabbit of Alice in Wonderland. You can tell Crispin is having fun, and anyone demanding more social commentary will be guillotined at once, right with any Freudian psychologists in the audience.
Overall, Swan Song is a delightful read that could’ve been more enjoyable for me if I had done what I advise you to do now: stay away from the Four Square edition!!! It spoils the solution on the front cover, thinking it’s being clever with its cutesy hint, when it’s really uncalled for. It’s editing isn’t particularly impressive, making sloppy mistakes in bunches but spreading them out a bit throughout the text. It isn’t particularly nice to look at or the easiest type to read, but as I said before, its greatest sin is committed on the cover.

My only hope is that there’s a special circle in Hell not even Dante knew about, reserved for people like whoever committed such an atrocity.