What's in a name?

It’s so appropriate that I’m writing this blog post today. Let me explain. Exactly one week ago, I was riding in a car across the USA, earnestly reading the book The Ghosts’ High Noon. This was when we crossed the border into Colorado, and in the town of Fruita, we pulled over for a break. We went to the welcome center (about a block away from a dinosaur museum, which my brother eventually convinced us all to visit) and went to the washroom. I then wandered around the place amiably while waiting for the others to come out, looking at the various pamphlets, maps, etc.
While I was crossing the room, something caught my eye: it was a small bookshelf. It only had two rows of books in it, but it was the notice on top of it that caught my eye. It said something along the lines of “Enjoy a free book! These books were donated by so-and-so Bookstore at such-and-such Avenue.” I looked at the shelves and suddenly, something caught my eye. Frantically, I went over to the main desk and asked the lady there: “Excuse me, but… did I read this right? Are these books free?” She smiled and replied: “Yes, they are! Feel free to take any you like!” I could have sworn I heard a host of angels singing at that moment. For what caught my eye? None other than the book Shackles by Bill Pronzini! (God apparently wishes me to read more Pronzini. I don’t object to that plan at all.)
I’m a relative newcomer to Bill Pronzini. I read a story of his about a year ago and it made me want to read his novels. I finally got around to it when I read the book Hoodwink… Scattershot and Schemers quickly followed suit. (Blogger, I’m afraid, has yet to bring back my review of Scattershot— but I luckily saved a copy as backup! I reposted it along with this review.) I had read of Shackles in this Detection by Moonlight post, and it intrigued me. Fellow blogger TomCat has already done a great job reviewing the book, which I cannot hope to match… so I won’t even try! Go ahead, just read his blog!
Why are you staring at me like that? After all, I… Oh, all right, fine! I’ll review it! I almost wish the job of a reviewer was that easy. (Am I getting paid for this? Nope. My sole reward is getting to read books I love— and that’s a lot better than it sounds.)
First and foremost, Shackles is not a mystery: it is essentially a thriller. (You could use the term “crime novel” if you wanted to be really general.) Perhaps it will shock you that I have read a thriller and survived. But it really shouldn’t— I read all of Ian Fleming’s James Bond novels (except You Only Live Twice) a few years ago and loved them all. I can enjoy a thriller tremendously when it’s done well, but my personal preference has always been for mysteries in the classic mould. So rest assured I will not criticise the book for being a poor mystery— it would be like complaining that an orange is a terrible apple. They are two very different genres and should be considered from different vantage points.
From what I’ve read of Bill Pronzini, it seems obvious that he enjoys experimenting with his tales. Consider: Hoodwink is like a love letter to pulp stories of the past and locked-room mysteries. Scattershot is a rapid series of cases in a chaotic work week for Nameless (which apparently started out as three short stories before being compressed into novel form). Schemers alternates from the points of view of four characters, with Nameless no longer being the “lone wolf”—one of the stories is a thrilling man hunt, one is a personal dilemma, and one is a clever locked-room mystery. Clearly, Pronzini likes variety in his work. 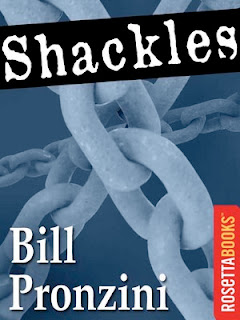 Thus, it shouldn’t really be a big surprise that Shackles is a thriller. You will never be given clues to find out whodunit; there are no mysterious bearded strangers loudly singing selections from Wagnerian operas at singular hours in front of a locked room in which the millionaire will be found with his throat mangled in the morning. (Wow, all those m’s… For that story, you’ll have to read my fictional novel: The Letter M Murders.)
However, there is a brilliant situation nonetheless, as that quintessential private eye, the beloved Nameless Detective, is abducted in the wee hours by a lunatic at gunpoint, who drives him to a cabin somewhere in the mountains. He is shackled to the wall there with enough food supplies to last him thirteen weeks. His tormentor has constructed an apparently perfect prison cell, from which Nameless can only escape by suicide…
The first 100 pages or so deal with Nameless being taken to the cabin and spending three agonizing months shackled to the wall, trying to figure out a way to escape. His interior monologues are brilliant— we find out more about Nameless, about his alcoholic father, about his long-suffering mother, and how he changes on the inside throughout his ordeal. He eventually devises a method of escape and the rest of the book deals with his efforts to hunt down the man who put him in that cabin and kill him.
I was captivated by both parts of the book— Nameless sustains a monologue for almost the entire novel, and some of his speeches would make the eyes of Shakespeare water. The fascinating thing is that Nameless, despite deciding to take the law into his own hands, despite walking through hell and back during his imprisonment, remains Nameless. There is one moment where he tells himself he is above the law, and the very next morning, he realises it was nothing but tall talk. He refuses to throw away all his beliefs and sink to the level of his tormentor. I would say more, but I would catch myself plagiarizing Pronzini, and that simply would not do.
Shackles is a brilliant work, period. It is a brilliant thriller, and the ending simply floored me (I will keep to myself the reasons why). Nameless is put through misery; he has everything he treasures taken violently away from him with no hope of ever getting it back, agonizingly living through each day, going through despair, anger, self-pity, sadness. When Nameless finally does break free, he intends to kill the man who wronged him. Is he justified? Is his attacker right in blaming him for his misfortune? What is justice? Pronzini offers no clearly defined black-or-white answers, and it is up to the reader to reflect on many questions— and these are far more complex and fascinating questions than “Will the hero sleep with the buxom young heroine?”
Overall, Shackles is one of the best thrillers I’ve ever read, and a certain candidate for one of the best novels I’ve read. Bravo, Bill Pronzini, for delivering a brilliant read! I loved it from start to finish.