Written by Patrick
The inanimate things around us have each of them a song to sing to us if we are but ready with attentive ears.
— Dr. John Thorndyke, “The Echo of a Mutiny” (collected in The Signing Bone) 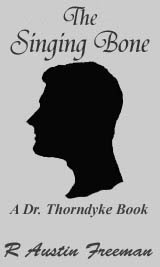 And thus we have returned to R. Austin Freeman. I launched this series of reviews last week with Freeman’s own The Eye of Osiris, devoted to various Crime Kings: male authors who wrote in the Golden Age of Detective Fiction and towards whom time has been extremely unkind. Freeman is an excellent case in point. At one point in time, he was a highly respected author, even earning praise from Raymond Chandler (no mean feat, that). Flash forward to the publication of Bloody Murder in 1972, and what does Julian Symons write about Freeman? “Reading a Freeman story is very much like chewing on dry straw.” And he hasn’t fared much better today, which just puzzles me. My confusion increased after reading The Singing Bone, a collection of short stories originally published in 1911, in which Freeman invented what is known as the “inverted detective story”—a technique that the television show Columbo excelled at. I was expecting an interesting experiment but not much more. But once again, Freeman surprised me and smashed the ball out of the park.

As I’ve mentioned, this is a short story collection, consisting of five tales. The first four are inverted detective stories—the final one is a more conventional one. Freeman felt the need to comment on this in his preface: “The peculiar construction of the first four stories … will probably strike both reader and critic and seem to call for some explanation, which I accordingly proceed to supply.” Each of these stories, as it turns out, is very entertaining and interesting, and I will proceed to comment on each below.