Eye spy with my little eye...

Written by Patrick
R. Austin Freeman is one of a group of writers that have collectively been labelled “The Humdrums”. They include prolific authors like John Rhode, Freeman Wills Crofts, and JJ Connington. Time has not been kind to them, as their books have become scarcer and scarcer to find. Often the price tags attached are ridiculous. These authors are often scorned by critics, and have an unfair reputation as writers so dull they couldn’t entertain a drunken fish. (I used this description in my review of John Rhode’s Death on Sunday, but it could easily apply to the “Humdrums” in general.) They actually had quite a following in their day. Raymond Chandler, for instance, surprisingly confessed that he enjoyed R. Austin Freeman’s work:
'This man Austin Freeman is a wonderful performer. He has no equal in his genre, and he is also a much better writer than you might think, if you were superficially inclined, because in spite of the immense leisure of his writing, he accomplishes an even suspense which is quite unexpected ... There is even a gaslight charm about his Victorian love affairs, and those wonderful walks across London ...'
This comes as something of a surprise from the same person who damned authors like Agatha Christie and Dorothy L. Sayers. And yet, it is somewhat understandable when you consider the painstaking scientific realism Freeman achieves through Dr. John Thorndyke’s investigations. (And boy, we sure know that Raymond really had a thing for realism...)
But is this all this “scientific realism” a positive point or a negative point about Freeman’s work? I think it’s a bit of both, as evidenced by his 1911 novel The Eye of Osiris. But to discuss why, I suppose I’d better start by describing the plot. 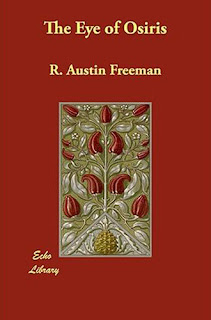 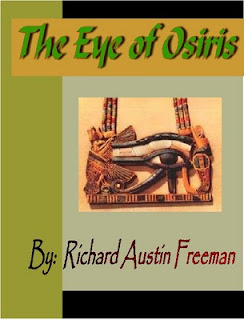 The will is a legal nightmare, and Freeman relishes in its pointless complexity. The discussions on the various legal complications are simply delicious. This is also where Freeman’s humour shines the most, such as when George Hurst takes the case to the Probate Court and tries to get the court’s permission for presumption of death, where the following exchange occurs between Hurst’s counsel and the judge:
“… The application is based upon the circumstances of the disappearance, which were, in many respects, very singular, the most remarkable feature of that disappearance being, perhaps, its suddenness and completeness.”
Here the judge remarked in a still, small voice that “It would, perhaps, have been even more remarkable if the testator had disappeared gradually and incompletely.”
I can almost imagine Freeman writing those lines, a twinkle in his eye. There is also a brilliant scene at a coroner’s inquest on a pile of bones from a dismembered body, discovered in various places, which may or may not have come from John Bellingham. During the inquest, the village cobbler, Mr. Pope, takes delight in causing a commotion over every witness’ testimony. That scene, along with the scene in the Probate Court, form the book’s high points. Freeman delights in the various medical and legal implications of these situations and they’re very interesting to start with.
Some bits of scientific analysis, however, are somewhat dry, mainly due to their length. For instance, when Berkeley, at Dr. Thorndyke’s request, studies the bones that have been recently discovered, the analysis is too long. Just when it seems that it’s over, Freeman has a group of characters walk right in with a bag of additional bones to examine! While some interesting points arise from the examination, their significance only becomes known in a discussion Berkeley has with Dr. Thorndyke. It would have been far more effective and economical to sum up the results of the inquiry in a few sentences and expand on them in the discussion with Thorndyke—it would also have aided the flow of the story, which is disrupted for roughly a chapter. 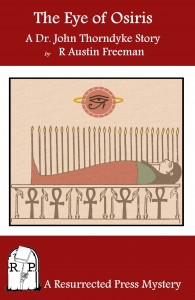 This is what I refer to as “scientific realism”—at times, it’s a great asset, such as the in courtroom scene. At other times, it detracts from the tale, as evidenced in the analysis of the bones. For the average reader, their significance will be completely unknown, so it’s not as if these were necessary bits in fair play detection. (Besides, fair play became a popular concept in the Golden Age; this was 1911.)
The ultimate solution is decent, but it has unfortunately lost much of its surprise. However, not all the surprises have been lost on us— some points managed to surprise me! While Thorndyke relies on science for several of his deductions, the solution is by no means out of the average reader’s grasp.
Overall, The Eye of Osiris is a fine work. Though sometimes Freeman goes on too long about things scientific, his “lectures” are often very interesting, and the courtroom scenes are a riot. The main romance is adorable. The book is a great example of a plot that has since become formulaic working at its finest. It’s far from the dry, humourless, and unimaginative stuff you’d be led to believe Freeman wrote.
As a final note, I intend to make this post the start of a Crime King splurge, as I take a look at Golden Age era male writers to whom time has been unkind. I have some potentially very interesting stuff lined up from various authors, and it should be enjoyable. The reader is warned.