Written by Patrick
Murderers make mistakes! … I should just think so! So many devise ingenious schemes to mislead the police and to avert suspicion from themselves: real brainy schemes which ought to succeed. And then they go and spoil them by some tiny oversight which gives the whole thing away, so that their guilt stands out a mile. It’s like a man who fits up an elaborate electrical system in his house: lights, fires, heaters; every conceivable gadget and convenience, and then spoils it all by forgetting to switch on the current.
—     Inspector French, The Case of the Lower Flat (collected in Murderers Make Mistakes 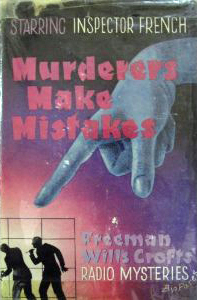 Freeman Wills Crofts is another one of “The Humdrums”, men whose books are too often scorned by critics, although they had quite a following in their day and have been rather influential in the genre.  Crofts seems to have had quite an obsession with seemingly perfect alibis and the way they are broken. Raymond Chandler called him “the soundest builder of them all when he doesn’t get too fancy”. Now, I disagree with Chandler on many points about the genre but he actually has a very good point there, which I will go further into as I take a look at Murderers Make Mistakes.
Murderers Make Mistakes is an interesting short story collection by Freeman Wills Crofts. These stories were originally radio plays, and the book makes no attempt to disguise it. It glories in the fact, giving you the original episodes and their broadcast dates. Eighteen radio plays from Chief Inspector French’s Cases (broadcast between 1943 and 1945) were converted into story form with varied degrees of success. In addition, five cases from Here’s Wishing You Well Again were converted into Inspector French short stories (the original detective being the coroner, Dr. Cataret). There are 23 stories in this collection, and I’m lazy, so once again, I won’t go through each story individually, but give you an idea of the collection as a whole.
The book is divided into two parts: the first are “Double Stories”. This first part seems to me better than the second, as it successfully combines the inverted mystery with the fair play detective story. We see the murderer’s motive, the way he comes up with his plan, and then him going through with the killing. Afterwards, the story is narrated by Inspector French, who tells his readers of his investigation process- what kind of story the killer told, what interviews he made, etc. He then challenges the reader to spot the flaw in the murderer’s plans, and then reveals it. These have been fairly clued and form the puzzle aspect of the tales.
Here is where Chandler gets it right: the stories are best when the killer has overlooked something apparently minor, something you could easily forget about or not foresee. It also works well when the killer’s plans are somehow messed up by an unforeseen accident. Some of the false alibi tricks are ingenious, but the way Inspector French cracks them is just too lucky— you feel the killer almost deserved to get away with it. 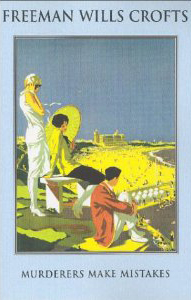 The second part is where the stories’ quality in general drops off. The killers are easily spotted, and usually the evidence “convicting” them is a case of far too meticulous nit-picking. “A-ha!” Inspector French cries out. “You claim that the sky was blue! But I happened to notice under similar conditions that the sky was actually a shade of dark blue-green! That proves you were never outside as you claimed, and therefore, only you could be the killer!” It’s like if Encyclopedia Brown investigated nothing but murders—the flaws in the killer’s plots might as well become a matter of spelling. Some stories have good gimmicks—The Waiting Car in particular had a neat one, as did The Home Guard Trench and The L-Shaped Room. But the other stories are either pulled apart by a very poor gimmick or the killer is so stupid he deserves to be caught (like in The Burning Barn or The Limestone Quarry).
You may have noticed that I keep referring to the killer as “he”. Well, that’s because in almost every case, the killer is male! There’s only one exception, and that doesn’t strictly count: it was a collaboration between a young woman and her lover, and the man did the deed while the woman provided the alibi. (I didn’t give anything away—that’s an inverted tale in the first part.) Why is the killer almost always male? I’m not sure.
Crofts is not a great writer, but this short story collection proved to be quite enjoyable despite his stylistic flaws. In particular, Crofts is not very good at emotions. Sometimes he succeeds decently, like when a blackmail victim can stand it no more and lashes out at his tormentor, resulting in the latter’s accidental death (The Lower Flat). But at other times he doesn’t do nearly as good a job, such as in The Army Truck, where a man pleads with his uncle for money so he can marry a girl he loves. It feels like little more than mandatory dialogue to fill out the radio programme to the half hour mark.
As I read along, a comment Curt Evans made about Crofts' faith influencing his work stuck with me, and I noticed some segments where that was definitely the case. This often happens through Chief Inspector French, who occasionally does some philosophical pondering. He does not, for instance, enjoy bringing people in when he knows they’ll soon be swinging for their crimes. He does not approve of any kind of murder but can sympathise with the killer if they are pushed beyond their limit by a particularly nasty bit of goods (usually a moneylender or blackmailer, or both). But particularly striking is Crofts' attitude towards killers who commit their crimes for nothing but personal gain: be it money (The Cliff Path), sex (The Relief Signalman), or both (The Army Truck). Sometimes his hostility toward such a deliberate, cruel and permanent act practically jumps off the page clawing at you:
Crookes had no illusions as to Norah Scott’s moral standards, but he feared she might draw the line at murder and hesitated to put the idea into words. When at last he did so, even he was somewhat shocked by her reply.
“Oh,” she said sharply, “so you’ve come up to scratch at last! I wondered how much longer you were going to delay. Of course I knew that was the only thing, but I wanted to see if you had the guts for it.” 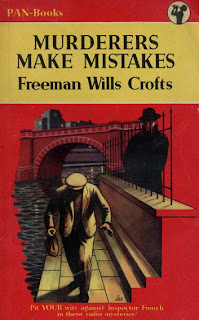 Of this murderous duo in The Retired Wine Merchant, Crofts bitingly comments thus:
... A mutual attraction grew up between them. This is really the only way to put it, because both were too fond of themselves to have an unselfish love for anyone else. However, both thought that marriage would be good business, if only Ebenezer Dutton’s cash could be secured.
Incidentally, I might as well point out the “let’s get this done with” approach to characterization in that story, where Crofts calls the killer Crookes and the miserly rich man Ebenezer. Actually, now that I think of it, it may have been signs of a sense of humour at work.
Overall, I make no bones about it: Freeman Wills Crofts was not a masterful writer. You won’t find sinister suggestions of the supernatural à la John Dickson Carr or characterization of Christianna Brand’s calibre. But the short story collection does have quite a charm to it that makes it overall an enjoyable experience.
As I’ve said before, I’m very lazy, which is why I did not tackle each story individually. After all, there are 23 and they’re relatively short, taking up on average ten pages. But I will assign each story a star rating out of 3, just to give you an idea of what to expect in this collection. If, however, I rate the story as an S, it is a sign that the killer is particularly stupid in the tale.
Part One: Double Stories
The Old Gun (***)
The Cliff Path (***)
The Telephone Call (** ½ — the killer here deserved to get away with it, as the plan was clever but a far-too-lucky break for French ruins it)
The Lower Flat (**)
The Army Truck (* ½)
The Invalid Colonel (** ½)
The Hidden Sten Gun (S)
The Hunt Ball (S)
The Avaricious Moneylender (** ½)
The Evening Visitor (S)
The Enthusiastic Rabbit-Breeder (* ½)
The Retired Wine Merchant (*— the murder plot is a good one, but the “flaw” in the entire plan is arguably the most boring in the entire collection, as it isn’t a flaw at all but a question of searching for proof to fit a hypothesis)
Part Two: Single Stories
The Home Guard Trench (**)
The Playwright’s Manuscript (* ½)
The Limestone Quarry (S)
The L-Shaped Room (** ½)
The Stolen Hand Grenade (½)
The Relief Signalman (S — or maybe it should be L for lucky? Because it’s either one or the other or both, and I have no idea which. It’s a poor story either way.)
The Burning Barn (S)
The Solicitors’ Holiday (½)
The Swinging Boom (*)
The Fireside Mountaineer (S)
The Waiting Car (***)
As you can see, there are stories with a particularly stupid killer in both parts, but there are more of these in the second part, as well as more stories that are generally unsatisfying. While the collection is an enjoyable one, I found the first part where it combines two genres to be its best.