Written by Patrick
How can I describe Christopher Fowler’s Peculiar Crimes Unit mysteries? I was expecting something rather like John Dickson Carr’s The Department of Queer Complaints: impossible murders and locked rooms being investigated by a police squad. Well, I was wrong—the series turned out to be just what it claimed. It was all about peculiar crimes. Some books, like White Corridor and Ten Second Staircase involve genuine locked rooms (or other impossible scenarios). Others, like The Water Room, are just bizarre crimes. 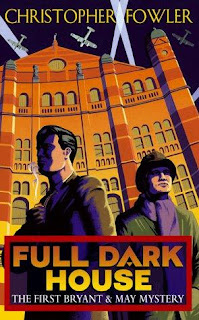 Since this is my first time reviewing a Fowler novel on the blog, I’ll give you a quick rundown of the previous entries I read in the series. Full Dark House has a brilliant atmosphere, a retrospective murder case in WWII London with a lunatic murdering people in a theatre. It has a lot of social commentary, but Fowler gets away with it because it’s good stuff. The only thing wrong with it is the solution, where the book falls apart, as some impossible occurrences are never adequately explained and the killer is just random.
The Water Room has a far less interesting set-up but an infinitely better solution. (With Fowler, it often seems that the better the set-up, the less interesting the solution, and vice versa.) Ten Second Staircase involves a lunatic serial killer dressing up as a Highwayman and killing minor celebrities, becoming one in the process. 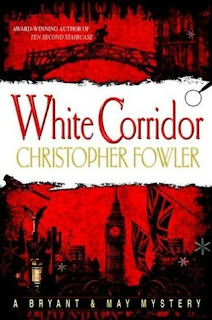 Finally, there is White Corridor, a book that I couldn’t bring myself to finish. All the fun and energy of the books seemed to have been zapped out. It literally takes 100 pages for anything of interest to happen. There is a locked-room mystery, but the victim is obvious from the get-go and takes forever to die— Fowler doesn’t help himself by trying the most amateurish pathos possible, as the victim was going to retire in just two weeks’ time. The locked room is actually very clever, but whoever wrote the plot description on the inside flaps was playing at cutesy hints again, following the noble tradition of Four Square’s edition of Swan Song. White Corridor was an off-putting experience, as, instead of investigating a mystery, we got to see a psychotic child beat his equally psychotic mother after his mentally unstable grandfather died. (Overall a charming family.)
But The Victoria Vanishes proved to be a good antidote— it’s filled with plenty of social commentary, but it’s a really fun read, even though it’s more of a police procedural (a subgenre I historically dislike). 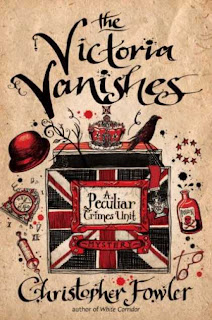 The Peculiar Crimes Unit cases star the odd couple of detective fiction: Arthur Bryant and John May. These two started working together during the war, and never stopped. John is younger by three years, and adapts to the modern world far better than Bryant, a notorious cell-phone murderer from whom no computer is safe. There are other staff members, of course, but the main attraction is the detective duo. They are brilliant characters— Arthur Bryant seems to be distantly related to Sir Henry Merrivale, and his interactions with John May are extremely fun to keep track of.
In The Victoria Vanishes, Christopher Fowler constructs an impossible crime that is an homage to Edmund Crispin’s The Moving Toyshop. Bryant is walking home from the pub after the funeral of Oswald Finch, the unit’s former pathologist, when he sees a woman walk into a pub. Later, the woman is found dead at the spot Bryant saw her, but there’s a problem— the pub has vanished, and instead there is a convenience store which has been there for years! In fact, the pub hasn’t existed for the better part of a century!
Why yes, it’s an impossible crime, but unfortunately the set-up comes with an inevitable flaw: the solution is so complex. It’s the only thing I disliked about Crispin’s The Moving Toyshop: the trick necessitates so much effort from the murderer’s part because no simple solution is possible. (Then again, that’s what I’d have thought about Le Diable de Dartmoor, but if there is a simple way to make a pub disappear overnight, please contact me right away.)
Is this a fair-play mystery? Well, yes and no. It’s really more of a police procedural, as Bryant and May try to track down a serial killer who targets middle-aged women drinking alone at pubs, seemingly at haphazard. There's an element of fair-play detection evoked in the finale, but it’s a real stretch, as the “clue” is an arcane one buried in a scene that seems entirely irrelevant to the plot. 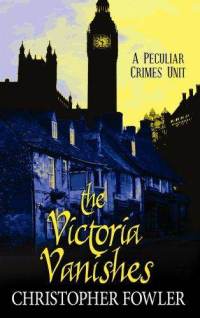 In fact, there are plenty of scenes like that, scenes which seem like they’ve gone nowhere and done nothing. Bryant, for instance, consults someone about the possibility of Christ’s blood being in London, for no reason other than he’s curious. Later, Bryant visits a witch friend of his; it’s an amusing scene, but one that contributes nothing to the plot. The suggestions she offers are never followed up on, because in the interim, someone has tracked down the information he wanted in the first place.
Like Fowler’s other novels, there is a lot of social commentary here. The only reason Fowler gets away with it is because he’s a brilliant writer. He has the gift, plain and simple. His style is intelligent and he assumes his readers will understand words of more than two syllables (and not just “delicatessen”). His sense of humour is wonderful. His plotting is interesting, and his imagination fascinating. The references he makes to unrecorded Bryant and May cases are highly intriguing. In a word, he writes, and he does it really well.
Apart from Bryant and May, Fowler’s characters are quite… variable. Those in White Corridor, for instance, almost all seemed psychotic. Much of the PCU is made of interesting characters, with one glaring exception: Raymond Land, a man who is openly despised by everyone, his wife included. She doesn’t even bother disguising her marital infidelities. It’s the one thing that’s always kind of bothered me about the series: Land seems like an OK guy, one who doesn’t want to take too many risks but not a bad sort once you get to know him… And yet in Fowler’s universe, he seems universally despised. Some moments are rather cruel, and there are one or two moments like this in The Victoria Vanishes.
Unfortunately, Fowler’s works are not always paradigms of fair-play detective fiction. Full Dark House flat-out cheats, for instance, and arguably, so does Ten Second Staircase. But nonetheless, I found this book highly engrossing and interesting. After all, I really like the idea of serial killers stalking cities. The one in The Victoria Vanishes is creative, but falls short of The Highwayman of Ten Second Staircase, who managed to strike a chord of fear as you envisioned him on his horse with cape fluttering behind him…
Overall, The Victoria Vanishes is plenty of fun, and there is a great twist in its ongoing storyline, involving the Home Office’s attempts to shut the PCU down. It promises an intriguing angle for the next novel in the series, Bryant and May on the Loose.