They Love Not Poison 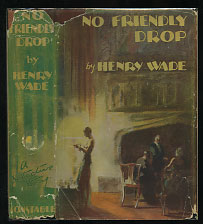 When I picked up No Friendly Drop by Henry Wade, I was at first expecting the “drop” to be a fall from a building— perhaps it would be an elevator murder if we were lucky. But as it turns out, I forgot a line from Shakespeare’s Romeo and Juliet (despite having acted in the play) where Juliet refers to “no friendly drop” having been left for her by Romeo. That’s right, this is a novel involving a poisoning, and it’s a really good one.

Henry Wade was the pseudonym of Major Sir Henry Lancelot Aubrey-Fletcher. That’s right: he had two titles and 3 names (four if you count the hyphenated name as two). But don’t let that mislead you. If you’re expecting Henry Wade’s detective novels to have a sleuth à la Lord Peter Wimsey running around, making pedantic comments and a general nuisance of themselves, you’re entirely wrong.
No, his detective is Inspector John Poole, one of the most likeable police detectives I’ve ever come across. He has a college education, but he doesn’t go off into irrelevant asides about the limits of translating The Rubáiyát of Omar Khayyám into Swahili. He does have a romantic interest in this novel, but it’s delightfully subdued, producing extremely memorable moments of banter.
But perhaps I should start with the story. It involves the murder of Lord Grayle, who was poisoned apparently with an overdose of his sleeping draught. Which of his family members could have done the deed? The suspects all have no apparent scruples, but it’s difficult to believe someone would actually poison the relatively harmless Lord Grayle, who suffered from a painful neuralgic condition that required the sedative. But how was the overdose administrated? And what motive could possibly exist? And, most important of all: did the butler do it?

The question “how was the overdose administered?” almost makes this look like an impossible crime, but I hesitate to call it such. Considered from such an angle, a reader would be most likely disappointed, as it hinges on a piece of evidence revealed pages before the solution. This is not the case for the entire solution, though: there are some brilliant clues hidden in the book that I completely overlooked, producing The Homer Simpson Effect (“D’oh!").
This is very much a mystery in the Golden Age tradition, though it seems to me like a precursor to the police procedural novel. You follow Inspector Poole as he discovers evidence and pieces his theory together— with about 70 pages to go in the book his theorizing starts to get on the right track, and it’s a matter of finding proof in order to prosecute.
The plot is wonderfully complex and yet it’s quite a simple matter. It’s a quiet, domestic affair, with just a handful of suspects, which does make the “process of elimination” method of solving mysteries easier. This doesn’t involve international conspiracies to swipe the Queen’s underwear during her Diamond Jubilee, but the plot does twist considerably, particularly when Poole tries to discover how the poison was administered.
Add to this the fact that the story is told in a delightfully humorous style. Consider, for instance, this bit where motives are pulled out of a hat for the local G.P., in a clever bit of subtle satire on the genre: “Don’t ask me to tell you that, Inspector. I know nothing about the circumstances of the case, but there are all the stock reasons: —dead man wrongs doctor’s daughter—or wife, dead man did doctor dirty trick in Australia eighty years ago, doctor wants dead man’s wife for himself, doctor dislikes dead man’s taste in neckties— you can give me six and eightpence and take your choice.”
Then there are the characters, who are brilliant. Although the story is told from Inspector Poole’s vantage point, you really feel like you get to know the suspects. One of the most delightful characters is the secretary, who shows a mind for detection and spends plenty of time bantering romantically with Poole. There’s the dead man’s wife, Lady Grayle, who lived for two things: her husband and luxury (in that order). There’s the son, not particularly nasty per se, but an MP whose mind is like an automaton, automatically doing whatever his ambitious and unscrupulous wife asks. 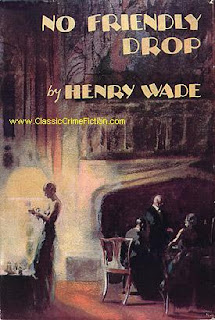 In fact, that aspect of the book may be the most remarkable: although Henry Wade was himself a nobleman, he perceives something fundamentally wrong with his class, and it translates effectively into this novel. See? There’s plenty of room for social commentary in a Golden Age “puzzle plot” novel— Poole doesn’t monologue about the state of the world for hours, but the criticism is subtle, and thus, doubly effective.
That just goes to show you: Golden Age mystery authors were a lot more intelligent and observant than they’re often given credit. No Friendly Drop by Henry Wade is a masterpiece of detection, with some brilliant clues and red herrings, a fun sense of humour and well-drawn out characters. Despite the relatively quiet domestic affair, Wade manages to make it every bit as interesting as a book with a serial killer running loose and strangling women on trains.
Wade, one of the founders of The Detection Club, was at one point a highly respected author and deservedly so. Based on this book, Wade seems like a brilliant author and deserves far better than being stuck in the out-of-print oblivion. I think the following quote sums it up best:
"... there can be no doubt that Wade is one of the outstanding authors not only of the thirties, but also of the immediate post-war period. His novels are varied in plot and situation; they have wit, and his style is forceful and elegant." —TJ Binyon, Murder Will Out (1989)

What has happened to Henry Wade is yet another example of injustice being perpetrated to a male Golden Age author, so that the myth can be perpetuated that only Agatha Christie (and other Crime Queens) and male hardboiled writers were ever any good. I, for one, can’t wait until Curt Evans’ upcoming book is published, to reject this myth once and for all.