LXXVII. In which the mystery reader gets less than his money's worth. 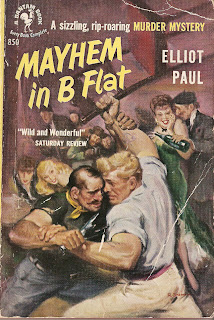 I recently acquired a copy of William DeAndrea’s Encyclopedia Mysteriosa, which already has become a valuable tool in my blogging activities. When looking up Elliot Paul and his detective, Homer Evans, I came across the following information:
“Like his creator, an American living in Paris, Homer Evans was intended to be a parody of Philo Vance. On that level, the character was a failure. Although far more accomplished than Vance (for instance, Evans had to give up painting as a hobby because all the professional artists of his acquaintance were nearly suicidal with despair), Elliot Paul was incapable of making anyone a tenth as obnoxious as Vance. Where the Homer Evans mysteries succeed is as absurdist, almost surreal farces, populated by likable loonies somehow involved in murder cases that didn’t have to make much sense—they just had to serve as a framework for the craziness.”
Well, there we have it: William DeAndrea has already summed up everything I have to say about Elliot Paul’s Mayhem in B Flat. This is a world so alcohol-soaked it makes Craig Rice’s books seem like the work of a teetotaller. The adjective describing the mad mix-ups that populate this book has yet to be coined. Tarantula fights, kidnappers, gangsters, drunkards, brawls in nightclubs, chorus girls and girls in general (a long line of them) run all over the place in this book, smack in the middle of which is a murder mystery— or at least something that masquerades as one.
It starts off comprehensibly enough: in the middle of a violin concert, some daring thief walks off with the performer’s valuable violin, strings up the accompanying piano player, and apparently vanishes into thin air. It’s at this scene that we get a hint of what the book will be like—the comedy is mad, surreal, and highly effective, but the mystery elements are banal. Homer, for instance, asks his love Miriam Leonard (whose first reaction to any disturbance is to pull out her automatic) to sit down and play at the piano. It seems like he’s trying to make a deduction of some sort to the police, but nope—after a while, he asks her to stop and leads to the police to the spot where the accompanist has been tied up and literally left hanging. How did he know she was there? Magic, I suppose, as Paul never gives you any explanation whatsoever.

There are one or two nice moments of deduction, but apart from those, Homer Evans seems to just pick conclusions out of a hat for no reasons you can see at all. You have to be willing to sit down and be swallowed by the madness, and although most of the time I was, there were several points where I just couldn’t.
Still, the book is genuinely amusing. For instance, several deaths occur by a mysterious poison that leave Dr. Toudoux ripping out his hair in distress as he tries to figure out what the devil it is:
“Shades of Pasteur, Koch, and Lister, sustain me now … Was ever a public official thus tormented? I have tested for every known poison, and even have invented three new ones, accidentally, in this cursed investigation. And I am deeper in the fog than I was when these two miserable corpses were as warm as Anglo-Saxons ever get.”
And then there’s this brilliant arrest of the wrong suspect by the Chief of Police:
“I arrest you, in the name of the Third Republic, for the murder of one Baxter of Boston, and a British chap who formerly kept an atrocious hotel.”
The comedy is, in a nutshell, excellent. It’s brilliant and wonderfully surreal and makes for a very fun read. There is even a dog character whose reactions to the situations the humans get themselves into are wonderful. (Even if he serves as an arbitrary plot device that could never work in real life.) But as fun as this book is, I really can’t recommend it to mystery fans who want a good puzzle. For instance, the mysterious poison that kills off about half the population of Paris is precisely that: a mysterious poison. Yes, it’s our good friend the mysterious poison unknown to science! (I haven’t seen it in a while, or its cousin, The Sinister Chinaman.) This book violates that fundamental rule and as a result, it masquerades as a mystery but is really a fantasy. The explanations you have to swallow for a man’s impossible disappearance from a store and the mysterious poison employed by the killer are banal. No, worse than banal— it is every bit as disappointing as the comedy is excellent.
This entire novel takes place in France, mostly in Paris, and the portrayal of the city is so nostalgic, it makes John Dickson Carr’s pre-WWII England look like a dark and sinister place out of a hardboiled story. This is a place where criminals exist, but at least they have manners and dress nicely (or have the decency to stay in prison), and people who take the pains to die via mysterious poisons are most inconsiderate. It’s an interesting portrayal of France from an author who obviously loved it.
I should also mention that the chapters have titles describing the events therein in a general way, and most of these are brilliant. Here are some of them:
2. Of the Light That Lies in Woman’s Eyes, and Other Pertinent Matters.
4. Of Methods of Sounding the “A”, the Dog Who’s Friend to Man, and the Attributes of English Hotels
16. Which Brings Tough Luck to Two Tailors and a Goat.
19. Of the Difficulties of Choosing a Suitable Occupation, If One Wishes to Make a Change
Basically, if you took a novel by Craig Rice or a John Dickson Carr mystery-comedy like The Blind Barber, improved the comedy, and removed any shred of ingenuity in the mystery, you’d get Mayhem in B Flat. It’s merely a curiosity, and as excellent as the comedy is, it’s no wonder Elliot Paul’s mysteries have been more or less forgotten today. Read it if you’d like a good laugh. As long as you don’t expect anything from the puzzle and are prepared for complete (unexplained) omniscience from Homer Evans, you’ll be fine.