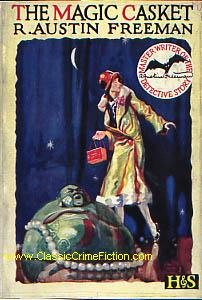 In the last few weeks, I’ve examined various Crime Kings and have quickly developed quite a liking for the work of R. Austin Freeman, creator of Dr. John Thorndyke. I loved The Eye of Osiris and the short story collection The Singing Bone, both of which are, in my humble opinion, masterpieces.
So I approached the short story collection The Magic Casket with plenty of optimism, hoping for something that would continue the brilliance. As it turns out, The Magic Casket is not a particularly brilliant short story collection, but it is a solid one, with some fairly good stories and interesting forensic techniques through which Dr. Thorndyke solves his mysteries.
The Magic Casket
The titular story is the first one, and it is the very best in the collection. The set-up is an interesting one, as Miss Mabel Bonney asks for the advice of Dr. Thorndyke. She owns a metal casket that was created by a known Japanese thief, and wherever she goes, sinister Japanese people seem to accost her. They seem to be after the casket for some reason or other. But for what possible reason?
The general idea behind this twist is a very obvious one—I highly doubt anybody would be surprised. But the details of the solution are brilliant, as Freeman comes up with an interesting twist on an old formula, without resorting to anything as disappointingly obvious as a hidden compartment.
The Contents of a Mare’s Nest
This is another excellent story, in which a man dies under suspicious circumstances, but due to the work of a clever forger, a false death certificate is obtained and the remains are cremated. That doesn’t stop Dr. Thorndyke from analysing the ashes at the request of the insurance company, and coming up with some astounding deductions! Again, the twist is easily spotted, but the fascination lies in how Thorndyke arrives at the truth using science, logic, and his brilliant mind.
The Stalking Horse
This is the most dull story in the collection, as a notorious anti-feminist is murdered on a train, and the evidence seems to implicate a prolific suffragette. While some of the scientific facts Thorndyke uses are interesting, the story as a whole just doesn’t work. The solution is ridiculously elaborate and altogether unbelievable, especially the easy time Thorndyke has solving the case. It’s as though the perpetrator wanted to be caught so much he signed a confession and hid it in his room before stepping out to tea.
The Naturalist at Law
This is a grand return to form after the last story, in which a man is found drowned, apparently by accident, in a ditch. But it was a rather shallow one—a sober person like the victim would have no trouble climbing up… That’s just one of the anomalies that add up, as Thorndyke constructs a solid case for murder, thus ensuring that the insurance company has to pay up. The party responsible couldn’t be more obvious if the name was an anagram for “the killer”, but the way Thorndyke takes a few seemingly-minor inconsistencies and builds up a case from them is fascinating. 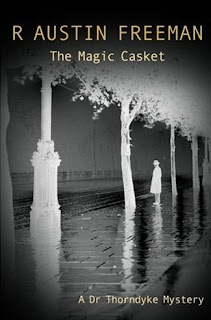 Mr. Ponting’s Alibi
This story involves the brutal murder of a young lady, and the natural suspect is a bitter relative. But the person in question has an apparently solid alibi! Thorndyke’s activities are interesting as usual, but this is one of the oldest and least-interesting tricks in the book, although I love the sneaky double meaning Freeman threw into this story. Who knows? It may have been a lot more surprising in its time!
Pandora’s Box
It’s just one of those months for Samuel Chapman. First, he finds a purse in the road and picks it up with the intention of going to the police station with it… only to be accused by a random woman on the omnibus of purse-snatching! He’s promptly tossed in jail for a month, but some circumstances force the police to look at the events from a new angle, and he is released. But as soon as he goes to reclaim a box containing some valuables from a hotel’s luggage room, he is arrested for murder! Apparently, the box contained body parts that seem to have belonged to his former lover. The dark humour in this tale is fantastic:
Just imagine a man bringing a portmanteau full of human remains into the luggage-room of a commercial hotel, opening it and opening another’s man’s box, and swapping the contents of the one for the other with the chance of one of the commercials coming in at any moment. Supposing one of ‘em had, what would he have had to say? ‘Hallo!’ says the baggy, ‘you seem to have got somebody’s arm in your box.’ ‘So I have,’ says Chapman. ‘I expect it’s my wife’s. Careless woman! Must have dropped it in when she was packing the box.’
Thorndyke’s conclusions are not nearly as interesting as others you’ll find in this collection, and the twist is extremely obvious, but the humour is particularly present in this tale and makes up for a lot.
The Trail of Behemoth
The story is an average one— I didn’t particularly like the premise or the twist, but Thorndyke’s deductions are rather interesting this time around. It’s definitely an unusual case, but not all the elements work.
The Pathologist to the Rescue
This is a fantastic story, although any publisher who reprinted it unedited would be a brave soul indeed. Consider this dialogue from a black man (referred to, of course, with the N-word): “My name Robert Bruce. Dat my English name. My country name Kwaku Mensah. I live for Winnebah on de Gold Coast.”
My thoughts on the subject are this: you have to keep in mind that these stories were written when they were written. These stereotypes, unacceptable in our times, were common back then, and sometimes, a stock character is required for a role. An easily-spotted stereotype made for an acceptable stock character, and it shouldn’t be taken personally or as a reflection of the author’s personal beliefs. Editing something like this out is akin to rewriting history: it was common at the time, so why bother pretending otherwise?
That being said, the black character in this tale shows up only near the end and plays a pivotal role. The murder case is a standard one where the wicked-old-Scrooge-like-uncle is bumped off and the nice young man is arrested, which threatens to put a bit of a damper on his relationship with the heroine. The formula works really well here, as Thorndyke uses an astoundingly brilliant way of identifying a patch of blood in pre-DNA days. I ask you now: if Freeman were around today, can you begin to imagine the havoc he would wreak on the detective story? DNA evidence, the advancement of fingerprint technology… heck, it would be his own personal playground!
Gleanings from the Wreckage
As Dr. Thorndyke and Dr. Jervis walk around London, they witness an explosion and expect a good fire, only to be disappointed when it’s easily handled and the promising beginning is wasted. But as it turns out, a man seems to have been killed in the explosion and Thorndyke comes to help the inspector. This is a run-of-the-mill tale, without much of a twist and with conclusions a bit more obvious than usual from Thorndyke’s part. The previous tale would have been a much better finale, to end the proceedings on a high note. This story isn’t particularly special, that’s all.
***
And there we have it: The Magic Casket. This short story collection reinforces my newly-found fandom of R. Austin Freeman. The level of scientific realism is actually pretty high, as Freeman is careful with the forensic details. Overall, the approach is not only highly readable but also very ingenious.
The stories are entertainingly written, and a few of these are top-notch tales. In fact, the worst that can be said about these stories is that when they don’t work, it’s usually because a scientific point is practically common knowledge nowadays compared with when the stories were first written. And that’s something you really can’t blame the author for.