Whose corpse is it , anyway? 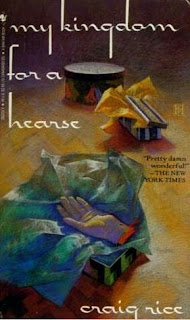 It was a welcome diversion to enter the mad, alcohol-drenched world of Craig Rice for a few hours as I sat down to read her book My Kingdom for a Hearse. It stars the detective team of Jake and Helene Justus as well as lawyer John J. Malone. This is a sleuthing trio that gets a whole lot more talented after a couple of drinks, and the adventures they embark upon are delightful.
The story starts when John J. Malone is hired by Hazel Swackhammer, who is the head honcho over at Delora Deanne, who is basically a cosmetics company. Delora is the model who does all the advertising, and as Malone learns, she isn’t real—all the images of her are composite shots of five different young ladies— one provides the face, another the hands, and so on, with one of the five providing her voice on radio broadcasts. But there’s been a distressing event— Hazel has received a package, with a pair of gloves inside… but the gloves are not empty! Distressingly, he finds that the model who poses for Delora’s hands has gone missing… 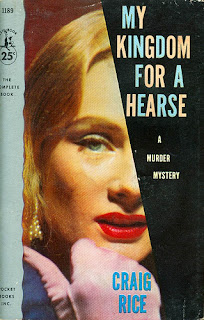 And thus begins a nightmare involving legally illegal actions of all sorts, as Malone struggles to keep one step ahead of the cops (led by von Flanagan, who added the “von” so he wouldn’t be called another Irish cop). While investigating, he runs across an enforcer who decides to keep his eye on Malone, as he is convinced Malone knows where his girl is.
Meanwhile, Jake Justus has decided to become a television producer, but hasn’t got any programming available— by the end, he becomes sick of everyone’s ideas for a new angle on a quiz program, and everyone from von Flanagan to the enforcer would like to get a big break in television. All this time, Helene Justus is just Helene— a feisty, charming, beautiful young woman who absolutely insists on helping out.
I really love immersing myself into a Craig Rice story. Her comedy is absolutely hilarious, and this is one of those cases where reviewing the book is difficult, because you’re struggling not to give away half the jokes. In short, it’s a delightful romp.
But the solution is… well, underwhelming. One of the major plot points is never really adequately explained, and the others are more or less lucky guesses. Malone has a choice of Suspect A or Suspect B, and he just circles B. A few slips of the tongue later, he’s proven his case. While you accept Rice’s version of events, you’re not quite satisfied that Malone deduced the answer from the information that he had. It just doesn’t quite add up. In particular, he gives one reason for choosing B over A, and the reason is entirely unsatisfactory— he chooses to accept one interpretation of the facts over another. It’s just not quite fair in its clueing, nor are the clues entirely conclusive.
Still, who am I to complain? I had a wonderful crime. (I apologize for the bad pun and it will never happen again... in this review, at least.) Malone and the Justuses are delightful characters that I love running into, and if the solution is not up to par with, say, The Corpse Steps Out, it really is just a minor blemish on what was otherwise an extremely enjoyable romp.