Return of the Crime Scene

Written by Patrick
The day after I wrote about Paul Doherty’s The Devil’s Domain, I boarded a flight that would eventually take me to Spain, where as part of a 23-person group, I participated in World Youth Day in Madrid. It was a wonderful experience, and I loved visiting all sorts of lovely places. Barcelona and Porto particularly impressed me as beautiful places with very friendly people. I managed to have all sorts of adventures, including one in which I (with a handful of others) managed to get separated from the rest of the group at around 10 PM in the middle of anti-papal protests. Of course, I wasn’t regarding it as an adventure while I partook in it, but as G. K. Chesterton wrote: “An adventure is only an inconvenience rightly considered. An inconvenience is only an adventure wrongly considered.”
Which makes for a wonderfully convenient segue into today’s book review, G. K. Chesterton’s The Flying Inn. Like I said last time, I took no mysteries with me, but I took Chesterton’s novel so as not to be bored. I read some of it on long plane rides to Europe and back (for some unfathomable reason, I have never been able to sleep on a moving plane, even if I’m extremely tired), but I ended up having so much fun with my friends that I did not turn a single page of the book while actually in Europe.
But before I proceed, I feel the need to justify my choice to review this book. At the Scene of the Crime is devoted to mysteries, though I make the occasional exceptions. This most certainly qualifies. It was penned by G. K. Chesterton, whose most famous creation is Father Brown. The Father Brown stories I’ve read (like with Carr, I spread them out to savour them more) are a delight, with fair play clueing and imaginatively puzzling paradoxical situations that are always fun. His contribution to the genre is historically important and also holds up well today, which I think justifies making an exception for his work. 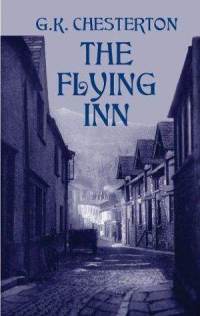 However, The Flying Inn is not all that removed from mysteries, at least in the sense of the legal system. It involves the adventures of Patrick Dalroy and Humphrey Pump. When Pump’s inn, The Old Ship, is closed down by the tyrannical Prohibition regime, led by Lord Ivywood, the two grab a wheel of cheese, some rum, and the old inn sign, and travel from place to place, exploiting loopholes in the legal system to avoid being arrested before moving on. These loopholes, the attempts Lord Ivywood makes to clog them up, and the adventures in general are simply delightful.
The Flying Inn contains some biting satire against Islam and Prohibition, as Chesterton launches into them with glee. There is The Prophet for instance, who proves with absolutely iron-clad logic that England was actually an Islamic country… only his logic is based on half-facts and the like, rather like Schlock Homes’ logic. The characters launch into a multitude of satirical poems that are well-written, witty, and quite funny. They philosophize endlessly on various things, such as in a series of poems that are given the collective title of “An inquiry into the causes geological, historical, agricultural, psychological, psychical, moral, spiritual, and theological of the alleged cases of double, treble, quadruple, and other curvature in the English Road” (“conducted by a specially appointed secreat commission in a hole in a tree by admittedly judicious and academic authorities specially appointed by themselves to report to the Dog Quoodle, having power to add to their number and also to take away the number they first thought of; God save the King”). 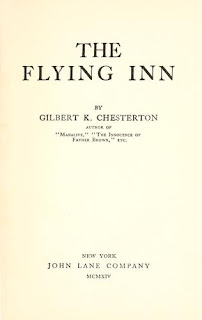 That’s basically the entire novel: a series of fun adventures, philosophical discussions, poems, and the like. It’s Chesterton at his finest and he seems to be enjoying the ride just as much as the reader. It’s a book well worth reading— easily a masterwork. The situations border on the fantastic, the characters are memorable and well-delineated, and they’re a likeable bunch (except for the villainous Lord Ivywood, a veritable scoundrel). The entire novel has something of a dream-like quality to it, rather like the entire thing is a mad (and delightful) drunken binge.
Yet, despite my masterful segue to introduce Chesterton into this post, my review doesn’t do the book any justice at all. Chesterton’s worldview and opinions could make for hours of discussion, but I don’t want to get into that. It’s a book that should be read prior to having a discussion about it, because the reader should discover everything for his or her own self— and I urge readers not to delay too long in reading it.