All that glisters is not gold

I have somewhat mixed feelings about Henry Wade’s Gold Was Our Grave. It is a 1954 novel, written under the Wade pseudonym by Major Sir Henry Lancelot Aubrey-Fletcher. It’s the third book I’ve read by Wade, and although in general it’s a solid read, it is somewhat problematic at the same time. It has elements of a police procedural (for which Wade hardly gets enough credit) but it’s a genuine mystery at the same time.
Perhaps I should start at the beginning (an excellent place to start, I find). Hector Berrenton is a financier, who years ago was involved in a scandal involving the San Podino gold fields, when a Mexican engineer fabricated a fictional reserve of gold, tricking the company involved into asking for investments… only to ruin many people who had invested in good faith. It resulted in the prosecution of Berrenton and two others, who were accused of knowing the gold field was fake and supressing the information, selling out before the bottom dropped out and making some nice profit out of the whole deal. However, due to lack of evidence, the trio was acquitted…
That doesn’t seem to sit well with somebody. All this time later, someone has sabotaged Berrenton’s car, severely injuring and almost killing him. On the day of this accident, Berrenton received a threatening note via the mail pointing to his partner (and co-accused) Jocelyn Fallon as the next target…
The situation sounds intriguing, and for the first third of the book, it genuinely is. Wade effectively plots the tale so it twists, turns, and the reader’s interest is easily upheld.
The problems start when we reach the second act. Suddenly, everything about the plot becomes painfully obvious, and Inspector Poole’s investigation reminds me of tips for horror movie characters to survive: “Always listen to the audience, because they know better than you ever will. Pay careful attention to the soundtrack. As a general rule, avoid solving puzzles or chanting spells that open portals to Hell.” Etcetera. If a similar list was compiled for investigators in detective stories, Poole would’ve violated most of these rules in the second act. Connections become obvious miles before Poole approaches them, and only one time does Wade make this apparently obvious connection seem like a dead end. 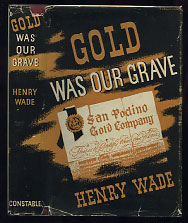 In fact, it’s only in the second half of the final act that the book returns to form, in a triumphant ending. The culprit has been caught, and in a stunning scene, is tricked by his lawyer into confessing the entire tale from start to finish, admitting his guilt. (I use the masculine “he” to refer to the killer only as a matter of convenience. For all you know, the entire country of Bulgaria might have been in on the crime.) The book ends as the same lawyer, through some very circular logic, proves that he can with clear conscience represent and defend the murderer at the trial, leaving the killer to ponder on the irony of his situation as it has just been revealed to him. This is yet another piece of evidence that makes me believe Julian Symons never read Wade when he dismissed him as “Humdrum” in Bloody Murder. Here we have a scathing (and darkly funny) piece of social commentary, and the portraits of the finance world are far from being conservative.
There are also elements of the police procedural in this novel, as we follow the painstaking progress of an investigation through the eyes of Inspector Poole. Unfortunately, he’s rather slow to make fairly obvious connections this time around, and that makes the overall quality of the plot skid down despite some excellent set-pieces. Ironically, not everything in the plot is fairly clued, but when a twist is randomly thrown into the works without any clueing whatsoever, the book finally gets out of the slump of the second act and into its brilliant finale.
Overall, Gold Was Our Grave doesn’t hold a candle to the two previous Wades I read—No Friendly Drop and Heir Presumptive. Although the plotting is more transparent in this book than those two, it makes for an entertaining read, and its ending is definitely worth the wait. I’d personally recommend reading other Wades first, but if the opportunity to read this came along, I wouldn’t ignore it either.