It's fun to charter an accountant... 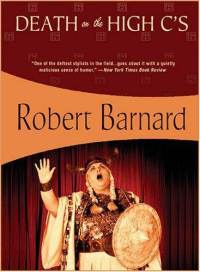 There are some books that you pick up at a bookstore on a hunch, because you just know there has to be something good in between those covers! Maybe you’ve never heard of the author or read their work, but you can’t resist either way. Sometimes, the hunches do not pay off— I learned this the hard way with The Affair at Royalties by George Baxt, purchased solely on the strength of a brilliant cover that had absolutely no relevance to the story itself. However, when these hunches do pay off, the experience is extraordinary.
Such was the case for me with Death on the High C’s by Robert Barnard. I had heard of Barnard of course, and read his insightful appreciation of Agatha Christie, A Talent to Deceive, which I liked very much. So when his name appeared on a book with such a gloriously punning title, I simply could not resist the urge to purchase it on the spot. I do not regret this purchase in the least.
Gaylene Ffrench fancies herself to be a great big opera star and refuses to hear anything to the contrary. But really, her opinion is bloated— she overacts all her parts, is nasty to her fellow cast members, and she sleeps around indiscriminately with every available male. For once, however, she really does give a sizzling performance—in fact, it’s downright electrifying. The problem is she doesn’t give it onstage, but backstage… after touching the doorknob of her dressing room and stepping on a metal doormat. The result? A jolt of electricity rushes through the despicable young lady, and she prematurely shuffles off this mortal coil. What makes this case particularly interesting is that several attempts have already been made on Gaylene’s life, and it looks like the assassin has succeeded at last.
There’s no lack of suspects whatsoever. Everyone in the company agrees that Gaylene was a most despicable person— not only was she arrogant and self-centered, she was also a racist bigot. She particularly was scandalized when Calvin, a black (but very English) member of the company gets engaged to Bridget, one of the girls (who happens to be white and Gaylene’s unofficial rival). However, Gaylene’s reaction may have stemmed just as much from the fact that her none-too-subtle sexual advances on Calvin were firmly rejected. But to be honest, just about anyone would have gladly done her in and the rest would just as gladly buy the killer a drink as a thank-you gesture.
Enter Superintendent Nichols, who as far as I can tell has not been reused by Barnard. It’s a shame. He’s an intelligent man and a competent investigator, and he has a genuinely happy, normal marriage. It is so normal, in fact, that he barely feels the need to comment on it! I don’t know if I’m the weird one, but I always find it so nice when somebody has a normal, content marriage. It’s so much more interesting than unending bouts of screaming, sarcasm, and cruelty. There’s a lot more to Nichols than meets the eye, but to reveal more would be to spoil a genuinely delightful plot twist. 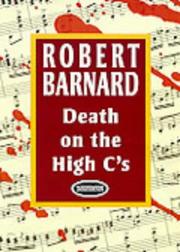 Barnard delights in presenting his characters and then introducing a minor twist to them. When we first meet Calvin, he is presented as a completely ordinary fellow, and it is only after the second chapter that Barnard remembers to mention that he just so happens to be black. It’s the character’s greatest strength— he isn’t black for the sake of being black, he’s just an ordinary person who happens to be black. (Far too often, characters written expressly as black characters end up as embarrassments, which makes Barnard’s approach so refreshing.) While the colour of Calvin’s skin has affected him in ways he might not want to own up to, he doesn’t let himself get bogged down by traumatic memories.
Above all, though, Barnard constructs a complex and fairly-clued plot in the Golden Age tradition. He manages to plant some major clues that walked right under my nose without being noticed. For a few clues, you’d have to know your opera to spot the hint when it’s given, but you can still piece everything together while being blissfully ignorant of all things opera.
You actually want to know what happens to the characters. Unfortunately, only the central group of characters is really strong. A fistful of characters remain half-developed sketches because others, far more interesting, get more “screen time”. When so-and-so suddenly reminds you of the existence of this-and-that’s brother, it sometimes felt like a genuine shock as I struggled to remember just when the devil that character was introduced (before eventually finding him mentioned in the recesses of Chapter Six).
However, to make up for this weakness is Barnard’s storytelling style, which is full of genuine, delightful wit. This is the kind of author Gilber Adair thinks he is. Barnard has genuine respect for the traditional form of mysteries, but he takes delight in poking fun at some of their conventions. Here, that convention is the person so unpleasant that nobody minds their being murdered— in fact, the murder is treated as something of a lark… until a second murder takes place. Even then, nobody seems to mind Gaylene’s being gone, but people do take offense to having the second victim removed from their midst. Basically, Barnard completely trumps Adair’s approach, but a more detailed analysis would only result in a lot of well-deserved bile thrown in Adair’s direction. Instead, to calm myself down, I will content myself with mentally reciting a limerick about an old man from Khartoum.
Overall, Death on the High C’s is a witty triumph of plotting and ingenuity, with solid characters and clueing that make the proceedings very interesting indeed. I highly recommend the book, and I have a suspicion that we haven’t seen the last of Barnard on this blog!