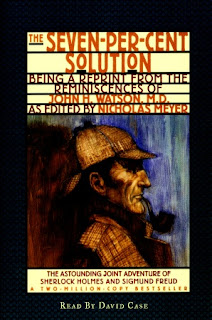 Although I profess myself to be a fan of Sherlock Holmes, I had never read The Seven-Per-Cent Solution by Nicholas Meyer, although it was a fairly popular Holmesian pastiche and was even adapted into a movie! (However, I am frankly baffled that Robert Duvall was cast as Watson. Certainly not the casting choice that springs into mind!)
Meyer presents his book as though it were an undiscovered manuscript of Dr. Watson’s, and he does it wonderfully. The idea behind this pastiche is excellent— Dr. Watson tells his readers that Sherlock’s death at the hands of Moriarty in The Final Problem never happened. It was, he claims, a complete forgery (and then he goes on to mention some other “forgeries” like The Mazarin Stone and The Creeping Man with disdain) and this book is to set the record straight about what really happened.
The idea is ingenious: Holmes’s famous cocaine addiction has gotten the better of him, and he visits Watson in a panic, telling him about Moriarty, the Napoleon of crime (in a scene very similar to that in The Final Problem). However, after falling asleep, Holmes wakes up with no recollection of the scene in the least. Watson is perturbed, and after a diagnosis, he realizes that Holmes is babbling about Moriarty only when under the influence of cocaine. What a surprise, then, when a Professor Moriarty comes calling to the doctor’s office!
In a brilliant twist, Professor Moriarty is not the evil arch-villain we’ve come to know; he’s a shy, nervous, and somewhat edgy person who is in a panic because Sherlock Holmes is persecuting him for apparently no reason, camping out in front of his house for several nights a week and making trouble for Moriarty at his school. Puzzled, he turns to his old chum Stamford, who introduced him to Sherlock in A Study in Scarlet. As discreetly as possible, Watson inquires how he could possibly help Holmes, and Stanford directs him to an Austrian fellow in Vienna who’s done excellent work on this sort of thing…
But how to get Holmes to Vienna? Watson racks his brains along with his wife Mary, until they hit on the idea of enlisting Sherlock’s brother Mycroft into their ranks. And so, the adventure begins, and as we find out considerably later, the Viennese doctor is none other than… Sigmund Freud! 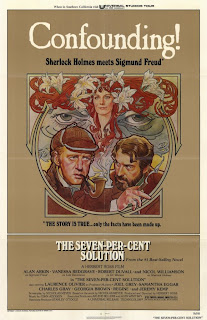 The idea is an excellent one and a welcome change from the typical pastiche that revolves around something that threatens to “unravel the very fabric of British society”, to put it in as clichéd a way as possible. Although I confess I hold no love for Freud or his theories, Meyer manages to make him into a very sympathetic character. (And this is the fellow who was convinced that his mother wanted him.)
The scenes where Holmes and Freud interact are marvellous— I particularly loved the scene where Holmes deduces a lot about Freud’s life, applying his methods and astounding the famed father of psychoanalysis. It’s all very inventive and has remarkable freshness.
The mystery is all concentrated nearer the end of the book, when Holmes, Watson, and Freud stumble upon a conspiracy that could mean war is looming on the horizon. Frankly, the mystery is easily solved and Watson appears rather dense, which is unfortunate since he was doing a fine job appearing rather intelligent until that point. Still, it seemed extremely obvious what Holmes was leading towards, and this lack of surprise forms the one minor blemish on the book’s otherwise impeccable record.
That’s the supreme irony about it: the book is ingenious, no doubt about it… but its ingenuity lies not in the mystery but in the inventive freshness of its nature as a pastiche! As much as I enjoy Moriarty trying to take over Scotland, England, or the world, those types of pastiches tend to seem all the same after a while. Meyer manages to produce something not just different from the norm, but also outstanding. Without a question, it’s one of the best Holmes pastiches I’ve ever had the pleasure of reading.