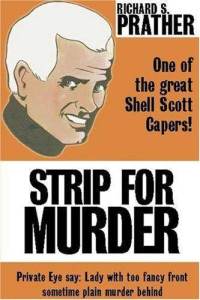 You can tell right from the beginning that Richard S. Prather’s Strip for Murder is going to be something special. This is a mystery novel in the hardboiled vein, starring wisecracking private eye Shell Scott. (“Shell” being short for Sheldon.) Scott starts the narrative off with a bang, when he’s out of place at a fancy party-- "and," Shell Scot declares, "if this was the Smart Set, then I was glad I belonged to the Stupid Set".
Naturally, as a private eye, he isn’t getting paid to party—he’s been summoned there by a potential client, the rich heiress Mrs. Redstone, who has two young daughters who will inherit the estate one day. Naturally, the lady doesn’t plan on dying any day soon, but she’s worried about daughter Vera, who’s gotten herself involved with a scumbag, Andon Poupelle, who seems to be after her money. (Which is of course a real shock, since the term “sex bomb” may have been coined to describe Vera herself.) She’s already hired one detective, Paul Yates, to look into Poupelle’s background, but Yates has just turned up with a hole in his chest where his heart used to be. Yates had already delivered his report, where he gave Poupelle a clean bill of health, but he’s been known to be not-quite-honest when the money’s right. 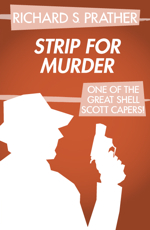 So Shell is hired to find out what Poupelle’s game is and who was responsible for Yates’ murder. Just like that, he gets a call from Mrs. Redstone’s other daughter, Sydney (but who goes by her middle name, Laurel). She is in a panic because someone has apparently been trying to murder her, and she gets Shell Scott to come to a place known as Fairview. Shell comes down, only to discover that Fairview is a nudist camp!
Shell decides to forget being a private eye for once and instead becomes the public eye. But don’t get me wrong— he has no intention of resting on his Laurels. (I know, I know. Two bad puns in a row. Just bear with me.) He goes to work trying to find out just what is going on—do the attacks have anything to do with Yates’ death? Where does Poupelle fit in? What about a new casino in town with a medieval theme? And of course, he picks the perfect time to irritate some nasty thugs who decide they’d rather like to play basketball with Shell’s head.
The result is a brilliantly comic detective story in the hardboiled vein. Shell Scott can be just as hardboiled as the classic private eyes when he has to, but I never had a tough time believing that he could be good friends with police officers and other people in general. You get the feeling that he can be very fun to be around. He’s a successful central character, which is an essential ingredient for this kind of story to work. 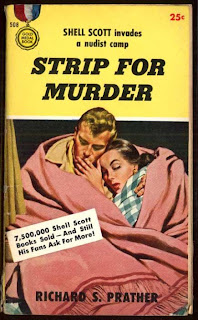 But to be honest, characterization isn’t the book’s strong suit. What makes it stand out are the humorous elements. Of course, by today’s standards, these moments may seem not-quite-politically-correct at times (particularly when Shell delights at the natural beauty to be seen at Fairview). But to be honest, I didn’t really care too much. Prather isn't crude-- the nudity and shenanigans in this book are unbelievably tame by modern day standards, especially in comparison to abominations that call themselves "comedies", like Epic Movie. This was a very fun, enjoyable read. You may not enjoy it if you insist on strict political correctness or if you have no sense of humour, but I found it wonderful, with an extremely memorable finale that had me grinning all the way through. The humour really is brilliant-- even, surprisingly, the slapstick elements, which is not at all easy to pull off in writing. (It's not even easy to pull off in movies, for that matter.)
In terms of mystery, though, there’s nothing that will shock anyone. Many people are obvious scumbags, and the criminal’s identity is not particularly shocking. There are a few decent clues buried in the narrative, but you won’t get a masterpiece of fair-play plotting with a twist that will blow your mind. So don’t expect that, and you should be able to enjoy the book for what it is.
Strip for Murder is, to say the least, a very memorable book. It is purely enjoyable from start to finish, and I really enjoyed meeting Shell Scott. I suspect it won’t be our last encounter. It’s a wonderfully fun book with plenty of fast-paced action and many humorous moments, and as a result, I wouldn’t hesitate in recommending it.