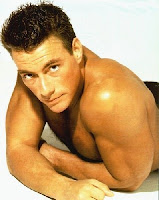 I have a confession to make. I love action movies, especially all those movies from the 80s and 90s starring Arnold Schwarzenegger, Sylvester Stallone, or any one of their rivals with the general exception of Steven Seagal. Dumber and derivative they may be, but I have plenty of fun watching some creative action, well-choreographed fights, and terrible acting. But above all, my guiltiest pleasures are watching Jean-Claude Van Damme movies.

I cannot explain this love of mine in any rational terms. Van Damme was at one point in his career considered Arnold Schwarzenegger without the price tag— like Arnold, he was consistently passed off as an American despite the heavily accented English, and his acting was almost always laughably bad. That being said, there are many minor gems in Van Damme’s career.

Universal Soldier (1992), a low-grade Terminator rip-off, has extremely creative set-pieces (it only helps when you know the person climbing the Hoover Dam in the film’s first big action scene isn’t CGI) and director Roland Emmerich does an excellent job disguising its somewhat low budget, though he can’t hide the story’s complete stupidity, which has become something of his director’s trademark. (In addition to Van Damme, an extremely campy performance from Dolph Lundgren is priceless, and the movie ends on a high note with two great one-liners.) While the theatrical sequel is absolutely terrible and the TV sequels are just as bad, Van Damme returned to the franchise in a third official instalment, Universal Soldier: Regeneration, which did a great job revitalising the franchise despite an extremely dark and gritty tone. 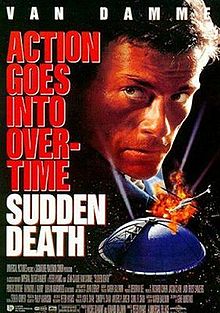 Sudden Death (1995) is a cheerfully self-aware Die Hard clone, when terrorists take over an arena during Game 7 of the NHL’s Stanley Cup Finals and threaten to blow the place sky-high. The twist? Only JCVD and the officials waiting outside know of the situation—the fans are entirely oblivious and they only have until the final buzzer before the terrorists carry out their threat. Oh, and the Vice President happens to be one of the spectators at this hockey game. The movie is very fun to watch and is very creative— for instance, we are treated to a very detailed fight in a kitchen between Van Damme and the Pittsburgh Penguins’ mascot, and at one point, Van Damme actually goes onto the ice and disguises himself as a goalie to avoid being caught! As for the hockey scenes, they’re surprisingly convincing, despite a blatantly obvious hockey error near the movie’s finale.
Over time, though, Van Damme got more and more serious with his acting, being relegated to direct-to-video hell for a long time. Finally, he starred in 2008’s JCVD, playing a fictionalised version of himself. The movie shocked me, because Van Damme proved he could actually act, especially when he delivered a brilliant monologue. The film, largely in French, is also a very funny black comedy, when Van Damme stumbles into a bank in the middle of a robbery, only to get involved. Meanwhile, the police are convinced he’s the mastermind behind the crime and attempt to get him to give himself up. 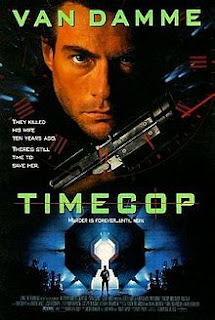 So why the discussion on Jean-Claude Van Damme? Because, gosh darn it, I just want to talk about one of his movies today: Timecop (1994). Is it silly? Yes. But it’s got Jean-Claude Van Damme in it, has some interesting ideas, is directed by the grossly underrated Peter Hyams, and technically it’s about crimes, law enforcement, etc. Am I stretching things to be able to review this movie? Undoubtedly. But it’s worth the stretch. Besides, it will lead nicely to another review I hope to write soon.
Our story begins when we find out that in the year 1994, time travel has been discovered. The current Presidential administration finds it laughable (as do I), but they are convinced to take it seriously and hire the Obvious Villain, played by Ron Silver, to oversee the project of policing time travel. See, it turns out that travelling back in time is an easy way to make money, because you can steal as much gold as a pack of horses can carry and it will make a major difference in the American economy! (I must say, this is proving to be one of Van Damme’s most intelligent films already!)
We then meet our extremely American hero (no, really—that accent is just for fun) Max Walker. He’s a cop who’s just been contacted with the opportunity of becoming part of the TEC (Time Enforcement Committee), and he has a lovely wife, Melissa, played by Mia Sara. He’s called out late one night and she begs him not to go. She says she has something to tell him. He asks her to wait until he gets back. She says okay. Walker opens the front door and is immediately attacked by a bunch of goons, who enter his house and blow it up with Melissa still inside. (You get only one guess as to what Melissa’s secret was, and it’s anyone’s guess why they didn’t kill Van Damme, as the movie’s events will later prove. But to ponder on this film’s paradoxes of time is the sure road to madness.)
We flash forward ten years to the future (2004, which is now the past), and evil Senator McComb is planning to run for President, planning to disband TEC. His secret: steal money by time travelling into the past and concocting various schemes to fund his election campaign. Walker is not a happy camper when he finds out from a treacherous ex-partner that McComb is behind this massive scheme… but this friend is promptly executed, leaving Walker with no evidence.
This movie is truly mind-boggling. To say its logic is porous is like saying the sky is blue. For instance: you cannot travel into the future, because it hasn’t happened yet. But how do we know what the present is? And once you travel into the past, doesn’t the present technically become the future? And why do you need to time travel in a strange little car that disappears as soon as you appear in the past? And despite all these lovely logical loopholes, why does the film insist in making a time paradox a major part of its resolution?
That being said, it’s all tremendous fun. If you can block all the stupid bits out of your mind (something I’ve become an expert at while watching Van Damme movies), then the villain’s plan actually isn’t that bad (there is an idea here that, if given some  thought, could have led to something great), and this is one of the funnest villains I’ve ever seen in a JCVD movie. Ron Silver has a blast in his role— I particularly love one of his lines when he goes to meet his past self. At one point during this conversation, he shouts out: “Never interrupt me when I’m talking to myself!”
Mia Sara is suitably sympathetic as Van Damme’s wife, and despite the silly and derivative nature of her role and relationship with Van Damme, she pulls it off just nicely enough.
Director Peter Hyams unabashedly tries manipulating his audiences by tugging at the heart strings when Van Damme finds out just what his wife wanted to tell him on that fateful night. It works decently enough. I’ve always liked Hyams’ work and I think he’s really underappreciated—he made some very enjoyable, entertaining popcorn flicks. You can see an example of his creativity in this film, where he slyly plays up a sex scene only to have it turn out to be Virtual Reality. (It results in one of Van Damme’s funniest one-liners ever.) Hyams’ career, I suspect, was killed by the stinker he made with Arnold Schwarzenegger, End of Days.
The movie’s finale really stands out for me, when two versions of JCVD are walking around in 1994, on the night the goons killed Van Damme’s wife. The movie becomes most creative then, and there are some neat, thrilling moments. In general, there are several creative chases, action sequences, etc. It’s just a fun movie to watch. There’s only one condition: you have to be willing to turn your brain off. If you’re the kind of person who enjoys movies like this, you’ll probably like Timecop.
And as for me, I love ‘em.