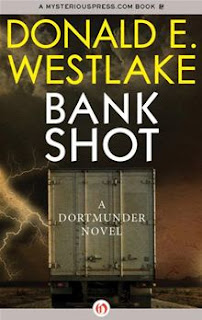 John Dortmunder is a serious crook—he doesn’t go after small fry. No purse-snatching or anything of the sort for him. But times are tough and he’s forced to run the encyclopaedia racket, going door to door pretending to represent an encyclopaedia company and getting people to pay a $10 down-payment on the whole set. So it’s understandably humiliating when his newest target turns out to be wise to the whole game and calls the cops on him. He runs out of the place while she’s on the phone and manages to run smack into Andy Kelp, who sits in the car blabbering at him, nearly allowing the duo to get caught by the police car headed their way, siren wailing…

But if the duo was caught in the opening chapters, we’d have no book, right? So they do manage to get away in one piece, but Dortmunder might just wish he’d gone back to brave the fuzz. Because Andy Kelp has got another brilliant scheme—to be more precise, it’s his nephew Victor who came up with this one. See, the Capitalists’ & Immigrants’ Trust is a bank undergoing renovations, and so for the construction period, their temporary location is in a trailer—a mobile home, to be more exact. On Thursday nights, there’s little time between closing time and opening time the next morning, so the bank leaves the money in the vault and seven security guards keep watch over the place. The idea is to rob the bank. And the robbers really mean it—when they set out to rob the bank, they intend to take the whole thing, trailer and all! 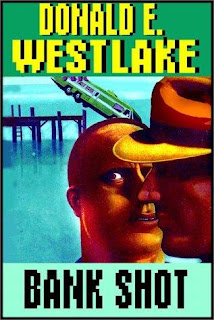 It’s the scenario in Donald E. Westlake’s Bank Shot, the second book in the John Dortmunder series. The last time we saw Dortmunder was in The Hot Rock, when he and his friends kept performing heist after heist to recover the Balabamo Emerald for the nation of Talabwo. Since that heist, my favourite of the villains, Roger Chefwick, managed to get himself thrown in the clink. Another member of that team is no longer available, and so Dortmunder is forced to recruit some more people to participate in this heist. One of these new characters is May Bellamy, Dortmunder’s lady friend who doesn’t exactly pose as his wife, but doesn’t quite deny it either. There’s Victor, Kelp’s nephew and a wannabe adventurer. Another new character is Herman X, a black man who’s an expert in locks and is also involved in some sort of black brotherhood. And this time, driver Stan Murch is joined by his mother, who is wearing a neck brace. (Oh, but she hasn’t hurt herself—she’s simply wearing it because they’re in the middle of a case with an insurance company.)

These people form the unlikely team that is out to rob the bank, and as with The Hot Rock, hilarity ensues. The plan keeps going wrong somehow, and there is a particularly hilarious sequence near the end of the novel where the police, busily looking for the missing bank, park their car right outside the trailer and manage to remain entirely oblivious! This scene goes in such wildly hilarious directions that I dare not say anymore, except to reveal the fact that coffee and Danish plays a major role in this scene. 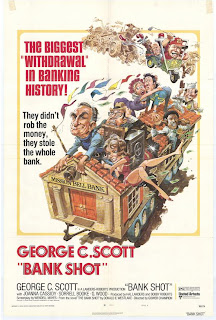 But that doesn’t mean this book is simply a clone of The Hot Rock. The general formula is the same— Dortmunder & Co. go to steal something, things go wrong— but the execution of this wild caper is quite different. There’s a lot more planning involved and there is only one heist instead of a series of heists. (What’s the Worst That Could Happen? also involved a series of heists.) And in general, the book feels like its own book, and not a retread over the same grounds. That’s a fairly impressive accomplishment, all things considered.

In fact, I’m not sure whether Bank Shot isn’t better than The Hot Rock. The stand-out scene with the police that I referred to had me laughing out loud. The character of Victor is also a blast. He’s an ex-FBI man, but one who’s disgruntled at the agency because he never did anything exciting and they didn’t have a secret handshake. He spends his time in a garage done out as his version of the Batcave, bathing himself in nostalgia with old radio programs, movies, etc. He records his own radio programs and takes them dead seriously— while the heist is going on, he takes the time to record a segment where he casts himself as a heroic police officer in disguise, infiltrating a group led by the ruthlessly vicious Dortmunder.

And it was in that scene where all of a sudden it hit me— John Dortmunder is Parker! A very unlucky Parker, perhaps, but still Parker as seen through a comic mirror. He’s an expert planner and master tactician, but luck is just never on his side. He inhabits a New York City that is full of people who behave like raving lunatics, constantly speaking at cross purposes, with each sentence more baffling to listeners than the last. But if Dortmunder’s world lacked this lovable lunacy, we would find ourselves on the dark streets of Parker’s world. I suppose that makes sense. After all, The Hot Rock began as a Parker novel but Westlake ended up creating Dortmunder to star in it because the book kept ‘coming out funny’. And in the next book in the series, Westlake apparently includes excerpts from a fictional Parker novel and pokes fun at that series’ conventions.

I really need to resist these books. Donald E. Westlake was such a fabulous writer, but the more books I read of his, the more my enthusiasm for his work grows. If I keep this up, I will have read all his stuff by next week, and I simply can’t let that happen. Bank Shot is a wonderful, wonderful read. It is more than just a worthy successor to The Hot Rock; it is a comic masterpiece of its own. If you’ve never entered the wonderful world of Westlake, you have no idea what you’re missing out on.

Bank Shot has been brought back into print by the MysteriousPress.com as an e-book. (You can buy the Kindle edition here and you can find links to various formats on this page.) I hope you will forgive my shameless advertising, but this is a publishing house well worth promoting— they’ve even got some Christianna Brand and Ellery Queen books reprinted! The book is at a high standard of quality— it’s well edited and well formatted, and even though it’s “just an e-book”, it has a good cover that makes me wish print editions were available. I’d love to have this series as a row of books on my shelf! As an e-book, it’s pricier than some others ($9.99 on Amazon.com), but hey, it’s Donald E. Westlake. His books are well worth it.