Written by Patrick
One little Indian boy left all alone
He went and hanged himself and then there were none.

This article contains spoilers, which have not been blurred out. Do not read on if you have not read Agatha Christie's And Then There Were None. 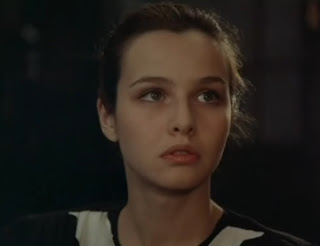 Patrick: Vera Claythorne is the original Final Girl—women like Laurie Strode in Halloween or Sidney Prescott in Scream, who manage to survive all the way to the end of the flick after all the other cast members (often predominantly male) have been killed off. That can often lead to a one-on-one fight with the killer, but in Christie’s book, the ending has a far more psychological twist. Either way, fans of slashers have much to thank Agatha Christie for— she practically invented what would turn into the slasher genre.

But let’s tackle the character of Vera Claythorne. I vividly recall my impressions when I first read this book, finishing it during a break in Monsieur Weston’s religion class back in Grade 9— I considered Vera to be Evil Incarnate. Of all the guests invited to Indian Island, Mr. Owen judges her to be one of the ones who deserve the most mental anguish, and so she is allowed to live. Her crime is one of the most heinous on the entire island—The Voice of U. N. Owen accuses her “that on the 11th day of August, 1935, you killed Cyril Ogilvie Hamilton.”


So who was Cyril and why did she kill him? A lover who wouldn’t take no for an answer? A predatory stalker? An ex-husband? No… Cyril was just a little boy. Vera was his governess and took advantage of her position to kill Cyril in such a way that she couldn’t possibly be blamed:

“He [Cyril] was forbidden to swim out far. One day, when my attention was distracted, he started off. I swam after him . . . I couldn’t get there in time. . . . It was awful. . . . But it wasn’t my fault. At the inquest the Coroner exonerated me. And his mother—she was so kind. If even she didn’t blame me, why should—why should this awful thing be said? It’s not fair—not fair . . .”
She broke down, weeping bitterly.

There’s no doubt that Vera murdered Cyril in cold blood. As the novel progresses, the body count gets steadily higher and Vera is practically forced to brood over her crime. She has visions of Cyril Hamilton—such as one where she imagines “there was someone in the room . . . She had heard something—surely she had heard something. . . . And then, as she stood there, listening—a cold, clammy hand touched her throat—a wet hand, smelling of the sea. . . .” It turns out to be a piece of seaweed, apparently planted by the killer to facilitate the murder of Judge Wargrave. 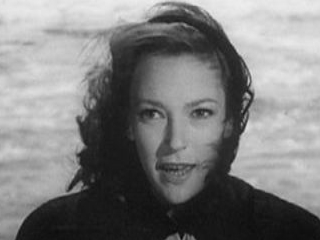 But what would drive a woman to actually murder the child under her care? Children might get annoying at times—and Cyril apparently had a whining voice: “Can I swim out to the island, Miss Claythorne?” he would ask over and over again. But Vera did not murder Cyril because he annoyed her—her crime was cold, calculated, and ruthless. She was practically engaged to marry Hugo Hamilton, a relative of the child’s who would have inherited a sizeable estate had Cyril been a girl. The only thing standing in the way was money. She saw her opportunity—should Cyril die, Hugo would inherit, they’d get married and live happily ever after. So she took advantage of the opportunity presented to her by Fate:

“Well, you see, Cyril, your mother gets so nervous about you. I’ll tell you what. To-morrow you can swim out to the rock. I’ll talk to your mother on the beach and distract her attention. And then, when she looks for you, there you’ll be standing on the rock waving to her! It will be a surprise”
“Oh, good egg, Miss Claythorne! That will be a lark!”

So the next day, the ever-dutiful Miss Claythorne swims out after poor Cyril, but she is too late and he is drowned. At last, she can marry Hugo and get her fairy-tale ending!

Only that never happened. Hugo left her, and to this day, she is haunted by Hugo’s image. “Had Hugo suspected? Was that why he looked at her in that queer far-off way . . . Had Hugo known?” Yes, Hugo had realized that his beloved wasn’t being honest with anybody, and he realized that this was in reality a murder case. There was never any confession—he just knew. But what Vera never realized was that Hugo loved Cyril dearly and didn’t give a damn about losing his inheritance to him. But Vera didn’t understand that… 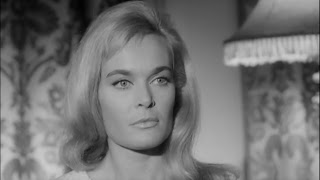 This is because Vera is incapable of love for anyone except herself. To her mind, it was simple—to advance in society, she had to marry Hugo, and she could only do that if Cyril was removed. “Self preservation’s a man’s first duty,” in the words of Phillip Lombard, who was explaining that his crime wasn’t really a crime because it was against a mere bunch of damn natives. Vera, still giving a façade of human decency, acted shocked:

“You left them—to die?”
Lombard answered:
“I left them to die.”
His amused eyes looked into her horrified ones.

But the very next morning, Vera’s reaction is diametrically opposed—rattled by two deaths, she defends Lombard when Emily Brent expresses disgust at his actions: “They were only natives . . .” She hasn’t had time to get to know Lombard in order to spring to his defense automatically as a friend— she is simply showing her true, and altogether ugly, darker nature.

So when Vera decided Cyril had to go, she didn’t waste much time pondering the ethics of her choice. It was a simple matter, carried out efficiently and without error. But Hugo realized what she’d done. This threw an unexpected kink in the plan. Hugo was supposed to be glad he could marry Vera now. Instead, he left her. How unfair of him! What a victim poor, poor Vera is! She throws herself a massive pity party because she felt she deserved this marriage after what she’d done for Hugo. She committed murder, and ironically lost the very thing she committed murder for—she surrounded herself with scandal, thus discouraging other potential employers or potential husbands who would move her up in society. And she got nothing out of it.

Vera Claythorne doesn’t regret her murder so much as she regrets having lost the object she committed the murder for. In that respect, she echoes General Macarthur—and they share something of a connection in the General’s last moments, where the man realizes what kind of woman Vera is and tells her she will be glad to die soon enough… His predictions turn out to be most accurate indeed.

The atmosphere of Indian Island is poisonous, and it starts driving Vera mad. She is the first character to openly break down into hysteria—Rogers was panicky and started dropping his H’s, but when his corpse is discovered, Vera begins laughing hysterically and asks whether any bees are kept on the island, alluding to the next part of the poem. And she begins to have visions—Cyril’s words keep echoing in her head, and she often convinces herself that Hugo Hamilton is on the island, watching her… 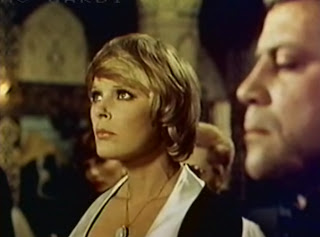 And it is what eventually drives her to suicide. She seeks relief from that all-seeing gaze of Hugo’s. Perhaps she feels some measure of guilt near the end of her life… but it’s worth pointing out that prior to this, she put on one final act of femininity and managed to murder Phillip Lombard with his own gun. She’s a performer right to the end— like Lombard, when push comes to shove, she will strike out without the slightest shred of mercy... and her strike will be lethal if need be.

For me, that’s Vera Claythorne: a cold, ruthless, and deadly actress. What makes her so dangerous is not just the way she deceives others—she deceives herself as well into thinking her crime either was no crime at all or it was done for Her One True Love. But her wall of self-deception starts to run very thin by the end of her stay at Indian Island…

“You can go to the rock, Cyril...”
That was what murder was—as easy as that!
But afterwards you went on remembering....
—the haunting closing thoughts of Vera Claythorne before she hangs herself in And Then There Were None.

Curt: These words were penned by Agatha Christie, an author who, according to P. D. James, is incapable of disturbing the reader:

“The last thing we get from a Christie novel is the disturbing presence of evil....One of the secrets of her universal and enduring appeal  is that it excludes all disturbing emotions; those are for the real world from which we are escaping, not for St. Mary Mead.’ (Talking about Detective Fiction, pp. 86-87). 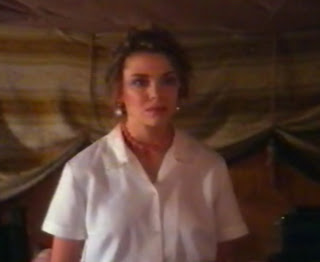 But course Indian Island is a long way away from St. Mary Mead.  It seems much closer to Hell....

Has P. D. James read And Then there Were None, the bestselling mystery novel in the history of the genre?  If she has (and her own chilling island mystery tale, The Skull beneath the Skin, would suggest that she has), how has she forgotten its power?  Therein lies a mystery indeed!

But back to Vera Claythorne, the last of our Indians.  I find her a fascinating character, because she gives me some understanding of the seductive appeal of murder, how its fingers can ever so nimbly undo the lacings of one’s moral conscience.  Certainly it did with Vera.

Christie shows through Vera how we can delude ourselves into committing the most heinous of all acts, murder.  Urging Cyril to swim out to the rock didn’t seem like murder to the self-deceiving Vera—it’s not like stabbing or shooting or poisoning someone, after all.  It’s a sort of passive murder--but it’s murder all the same, morally.  And it’s the murder of an innocent (if evidently somewhat whiny) child, one loved by Cyril’s uncle, Hugo, the unlucky object of Vera’s “affection.”

I do think Vera loved Hugo Hamilton.  Or more precisely, she desperately wanted him, overwhelmingly desired him.  But true love of course would not have allowed Vera to engineer the death of the boy Hugo loved, so that she could have Hugo to herself.  Vera’s “love” is monstrous in its consequences.

From Mr. Owen’s confession, wherein he relates his encounter with an inebriated Hugo on a transatlantic ocean liner, we learn that through her monstrously selfish action Vera may not only have extinguished Cyril’s life but shattered Hugo’s as well: 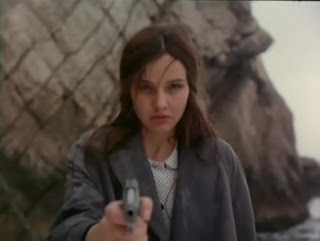 But Christie—the writer who, remember, P. D. James tells us “excludes all disturbing emotions” from her books—knows precisely that: that even those “nice straight jolly” girls like Vera can--and do--commit murders.

I myself find Vera a poignant character.  She came so close to happiness.  If Hugo had been able to marry her, she probably would have lived happily ever after--and no one need have died.  As it is, Cyril dies, Hugo we last see as a picture of misery drunkenly rambling on an ocean liner, and Vera herself is leading a sort of death-in-life existence.  From the moment we first see her, “riding in that hot third-class carriage with five other travelers in it,” on leave from her post as “games mistress in a third-class school,” we can tell something isn’t as it should be.  She’s smart, attractive, confident and capable (rather like Philip Lombard in fact)—why is she reduced to this?

Ultimately we learn the truth.  She’s a callous murderess whose misdeed redounded upon her.  It’s all rather tragic, but all the same it’s Vera herself who figuratively knotted the noose with which she hanged herself on Indian Island.