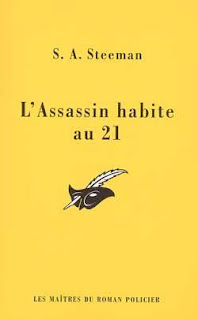 It’s been two and a half months since the first death, and the murderer has literally left his calling card at every crime scene. He calls himself “Mr. Smith”—admittedly not a particularly colourful alias, but apparently an effective one, because the police cannot track the killer down. And the Smiths of London are understandably going through a very difficult time…

Until one day, Toby Marsh climbs up onto a lamppost and verbally abuses police constable Henry Beecham, who takes it upon himself to haul the lad into the clink. Once there, Marsh tells an astonishing tale: he followed Mr. Smith home from his last murder, and can give the police the address: the murderer lives at no. 21 Russell Square! But here’s the catch… no. 21 Russell Square is a guest house!


Thus begins Stanislas-André Steeman’s L’Assassin habite au 21 (The Murderer Lives at No. 21). It is, without a doubt, one of the all-time greatest mysteries ever written: an absolute tour-de-force that is a delight from page 1 to page 187. When we meet the inhabitants of 21 Russell Square, they are expecting a new guest to arrive: M. Julie, a French professor at the Collège de France. He has just come to England to study certain items at the British Museum. The police seize their opportunity and kidnap M. Julie, letting him know of the situation and asking for inside help from him. Julie’s reaction is most unexpected: instead of aiding the police, he decides to flee the house! But before he managed to make good his escape, the hand of Mr. Smith struck him down! (It’s a good thing he managed to scrawl a cryptic, albeit incomplete, dying message…) The murderer has now shown his hand and the police play a deadly game of cat-and-mouse, trying to outwit the assassin… 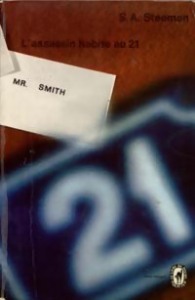 Oddly enough for a book of this sort, L’Assassin habite au 21 combines some very dark and intense scenes with some extremely funny ones. When we first meet the residents of the guest house, for instance, Major Fairchild is laying siege to the bathroom, while Mrs. Crabtree is valiantly holding the fort. When the police ask M. Julie a hypothetical question—“What would you do if you were living in the same house as Mr. Smith?”—his answer is: “I’d move out!” And, perhaps funniest of all, when Mr. Smith murders M. Julie, he telephones several newspapers to announce his new murder… and the first ones do not believe a word he says!

“Who’s speaking?”
“Mr. Smith, in person.”
“Oh! Mr. Smith? The Chancellor of the Exchequer here! How are you, old bean? … Hello? … Hello!” (chapter 6; the translation's my own and I've taken some liberty with punctuation) 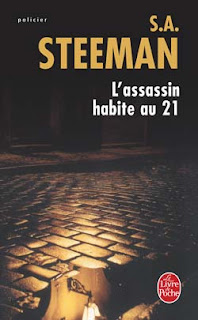 By itself, that would be good enough… but this is Stanislas-André Steeman! He manages to construct a wonderful gem of a mystery. The clues are entirely there—and there’s one particularly devilish clue on which the whole solution depends. The unmasking of Mr. Smith is a brilliant scene—we go on a long walk through the foggy streets of London as one character is being threatened by Mr. Smith, who remains unnamed until the final sentence of the chapter. It is dark, intense, suspenseful… and the surprise is wholly unexpected! And the whole solution is so neatly constructed, so satisfying… I really can’t praise the book’s brilliance enough!

I really wish this book were available to an English-speaking audience. There’s only one problem— M. Julie’s dying message is in French of course, and there would be far too many difficulties in attempting to translate this into any other language. If I were translating the book, I can see a way out of this difficulty, but I’m a mere student after all and have no idea what the copyright situation is.

What more can I say about this book? I don’t want to say too much and risk spoiling anything—but if I say too little, my enthusiasm might not be clear enough. Let me put it this way: of all the mysteries I’ve read this year, L’Assassin habite au 21 is my absolute favourite thus far. It is a grand detective story which even includes a challenge to the reader, and it is undoubtedly one of the great achievements in detective fiction.

And what better way to introduce Stanislas-André Steeman to the blog? You may notice that there is now a new page on the blog devoted to Steeman—as I have done with Paul Halter and René Reouven, I intend to walk through Steeman’s work and the page will chronicle my progress. But can anything match this phenomenal performance? We’ll just have to wait and see.

Note: This book was adapted into a stage play by Steeman, and also into a movie by Henri-Georges Clouzot, sometimes referred to as the French Hitchcock. I intend to review both adaptations on this blog in due course.

Another note: According to the back of my copy of the book, L'Assassin habite au 21 was voted as the best roman policier of all-time, beating out The Mystery of the Yellow Room and The Murder of Roger Ackroyd. I am not sure when this vote took place and where, but it's that kind of classic right enough.

Final note: The post title is the name of chapter 22.