No, the murderer doesn't live here... try number 21 in Paris 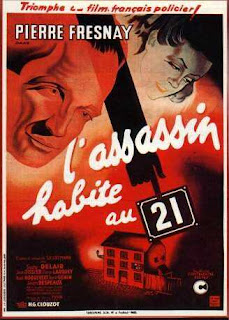 Yesterday, I was initiated into the Stanislas-André Steeman Appreciation Club when I read L’Assassin habite au 21 (The Murderer Lives at No. 21) for the very first time. I marvelled at the plot construction, the meticulously fair clueing, and the brilliant ending. But why am I bothering you with this summary? Go and read my review for yourself—I can still feel the enthusiasm dripping from my words. In fact, instead of starting a new mystery novel, I spent much of my reading time yesterday re-reading several passages from the book one more time… and my appreciation only deepened.

Naturally, it was only a matter of time before I got around to reviewing the film adaptation. It was released in 1942 during the Nazi occupation of France. American films were banned and so the French cinema was pressed to give its audiences quality films—and thus, Henri-Georges Clouzot (sometimes called the French Hitchcock) was put into the director’s chair for his first major film, adapting L’Assassin habite au 21 with the help of the book’s author. And that’s about all I’ve been able to piece together—I’m sure more material is available on this film’s genesis but I haven’t got the ability to go out and do more research. Instead, I’d like to discuss the process of adaptation: what has translated well? What doesn’t work? What unique touches does Clouzot bring to the film as the director? And so on… 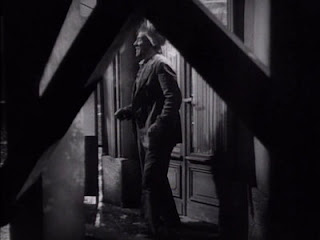 Well, first off, the adaptation is fairly liberal. The most obvious change is that the London location is changed to Paris, and accordingly, the serial killer “Mr. Smith” now masquerades as “Monsieur Durand”. It’s a change that makes sense, considering that this was filmed in French… however, the unique London atmosphere of the foggy streets is lost in the process.

Which isn’t to say that there’s no sense of menace in the film. Au contraire! This is mainly due to Clouzot’s work. There are a few murders that take place directly on screen, and the very first of these at the film’s start is particularly chilling. Monsieur Durand is stalking his next victim and we see him prepare to pounce—all done from the killer’s POV. We see the victim hesitate as he realizes for the first time that someone is following him… the pace of the steps subtly changes… a car drives by and the killer stands still… This is quite simply a brilliant shot; there’s another really good moment in a similar vein when Monsieur Durand guns down one of his victims. This is where the sense of menace comes from. 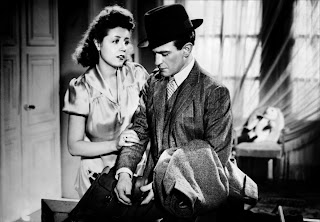 Unfortunately, in the process of adaptation, many characters were dropped—even the character of M. Julie, the victim in the novel, is gone... as is the clue of the dying message! Some personalities were blended together and reassigned and as a result we have a very small number of people living at the guest house—which is still at number 21, but no longer on Russell Square. Thus, when the ending arrives, it doesn’t come as such a jolt… And the visual nature of the film medium makes it impossible to film the novel’s climax, where the murderer remains unknown until the chapter’s final sentence—we know who Durand is far longer, and although Clouzot does a nice job throwing in some other touches from the climax, its main effect can no longer work. 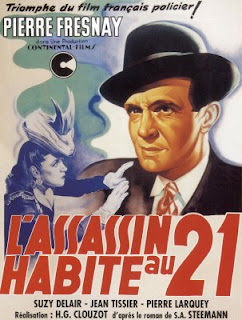 In addition, the character of Mr. Wens, Steeman’s series detective, was introduced into the proceedings. I have no objections to this in principle—Wens is a very fun character and his interplay with the singer Mila Malou is often very funny indeed. And he’s written in well—he goes to the guest house in disguise as a priest, and this gives rise to some funny moments as well, such as the scene at the dinner table where he reads from his Bible! However, it gives us an obvious detective figure from the get-go, while Steeman’s novel doesn’t give you that luxury. At times in Steeman’s novel you wonder if anyone could possibly unmask Mr. Smith—in the movie, you know that Mr. Wens is going to solve the case in the end. It’s a subtle difference but one that works somewhat against the film’s interests.

I have taken a lot of time to point out the downfalls of the adaptation, but there are some really good points about it as well. Although the novel’s climax doesn’t work as well on the screen, Clouzot comes up with a wonderfully visual way for a character other than the detective to realize what the solution is. It’s a wonderful scene. The interplay between Mr. Wens and Mila Malou is wonderful, and they take the time to playfully flirt (especially Mila) which gives the movie some of its brightest moments. Just like the novel, the movie effectively combines dark scenes with very funny ones—and when Monsieur Durand confronts Wens at the end of the movie, the scene is laced with dark humour that had me laughing out loud! 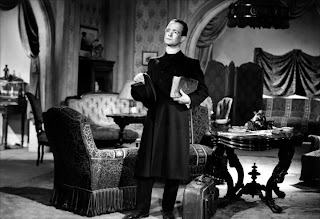 Overall, L’Assassin habite au 21 is a good movie, but I wouldn’t place it on the same level as the novel from which it came. Mainly, I think there are too few characters for the ending to pack the same punch as it does in the novel… I have dissected the smaller problems in detail, but overall, Clouzot’s direction is wonderful, the adaptation is on the successful side, and the condensation of plot is managed relatively well. There’s a lot of great humour as well. It’s fun entertainment, but I highly recommend reading the book first. Although it uses the same twist, the smaller number of characters is problematic and it drops some of the novel’s most audacious clues, so that you may not realise just how brilliant the book’s ending is if all you have to go on is the movie. But if you have read the book, I think you should be able to enjoy the movie just fine.