A Twist in Time

Written by Patrick
One theme that particularly fascinates me is, without a doubt, the time paradox. It is unfortunately difficult to deal with. (…) Time paradoxes suggest a wide variety of situations, the most classic being the case of the man who travels back in time to kill his grandfather. The rational solutions to explain these phenomena, on the other hand, are not legion…
— Author Paul Halter in an interview

The date: November 21st, 1955. Spectators leaving the Adelphi Theatre are surprised to see a young man, in his 30s, wearing clothes long out of fashion from the turn of the century. He’s walking around as if he’s shocked, seeing everything around him for the first time. He almost gets killed by a car, but Providence spares his life. Unfortunately, Providence doesn’t help the man in question when he goes to a subway station. When the sound of the oncoming car is heard, the man appears curious and enters the tunnel to get a good look. And that is when he gets crushed by the subway, his body thoroughly mangled. Happily, the extensive damage leaves the face relatively intact and fingerprints can be salvaged from the corpse.

Thanks to the evidence of the deceased’s face, Inspector Archibald Hurst manages to find out his identity. But the maddening part of the whole puzzle is that the man cannot possibly be who he is identified as! The body is identified as belonging to one Victor Stephenson. Here is the catch: on December 2nd 1905, Victor Stephenson went for a walk and never returned home. Almost 50 years later, he’s been spotted again—but he hasn’t aged by a single day! And the corpse bears this out: the dead man’s pockets are full of old things from 1905 but they seem like they’re in brand-new condition!


The deeper we enter into the case, the less probable is a mistake over the dead man’s identity. Two days before he met his gruesome end, Victor’s widow Dorothy (apparently not quite the widow she thought she was!) met her death in a locked shed, apparently due to a heart attack. Yet for the past several weeks, Dorothy Stephenson and her family have been terrorised by what can only be described as Victor’s ghost!

As part of the series of hauntings, a caller comes to the Stephenson house and asks for Colin, Dorothy’s second husband (and Victor’s brother). When Colin enters the door, he is pushed aside and the prowler begins to run down the hall. Stunned, Colin hesitates for a few moments and then launches a pursuit (followed in turn by the maid). They see the prowler enter a room and they reach it a few moments later. They see a line of footprints leading to a wide-open window, yet there are no footprints in the flower bed outside, and it is far too wide to have jumped across! But only a few seconds have passed… the intruder seems to have evaporated into thin air!

Granted, it’s not your conventional locked-room scenario, but neither is this: when Dorothy’s two granddaughters, Charlotte and Ariadne, were alone in the house, the mysterious caller paid a visit. And while talking, the caller at one point turned to face a mirror. The girls were shocked to discover that the visitor’s face did not appear in the mirror! Not only are we dealing with time travel, we’re also potentially dealing with the undead: a vampire.

Naturally, this doesn’t make Dr. Alan Twist happy—and Inspector Hurst is in severe danger of tearing out all his hair. They are accompanied by Inspector Briggs, the sarcastic subordinate of Hurst, always eager to try outdoing his boss. All this forms the basic plot of Paul Halter’s brand-new novel (released a week ago) Le Voyageur du Passé (The Traveller from the Past). There are many apparently-impossible scenarios to be found in this book. There’s Dorothy’s death in the locked shed, for instance, which I will not elaborate on for fear of revealing too much. The dead man’s fingerprints come back in a big subplot, and at first I regarded this with scorn —did Halter really expect me to be fooled for even a second? But a few twists later, I found myself sympathising with Inspector Hurst’s near-apoplectic fit.

And as a whole, the solution is pretty good. Halter manages to spring a genuine surprise in the dénouement, and the solution is satisfactory overall. Although the secret to Dorothy’s death is not particularly interesting, the other impossibilities are pretty good. I liked how the mysterious visitor made his reflection disappear. I really liked how he disappeared when pursued by Colin. And I thought the final impossibility was dealt with decently— although you do have to accept a rather far-fetched point to make this solution remotely plausible. The solution is pretty well clued, and Dr. Twist tumbles to it with the help of a snake, a cat, and some ducks… But frankly, I thought the ducks’ involvement was rather stretching the limits of clueing, and the same goes for the snake. Although it’s not on the same level as Halter’s masterpieces (like Le Tigre borgne, Le Diable de Dartmoor or La Quatrième Porte), the plot as a whole works very well.

The plot’s bizarre, utterly fantastic premise also makes way for some really nice atmospheric moments. Many of these occur when the Stephenson family recounts the persecution they suffered from the mysterious stranger, that titular traveller from the past. I really liked the way his voice on the telephone was described, and the many events that take place are often chillingly bizarre. 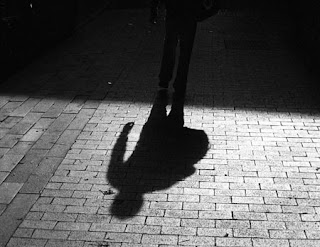 The characters are, generally speaking, among Halter’s successes. I really liked the character of an artist who has yet to make her name known in the art world, yet who possesses genuine talent. There’s a good love triangle with generally likeable people involved, as a young woman is not entirely sure which of two young men she loves. The men involved regard the other with suspicion and a not-inconsideable dose of hatred. There’s the younger sister, a submissive and socially awkward girl who has never really emerged from her shell. And then there’s my personal favourite, Colin Stephenson. He is Dorothy’s second husband but back in the day, he was a famous magician, debunking fake spiritualists… but in recent years, he’s converted to spiritualism and has become one of its defenders, much to the derision of his former colleagues! I really liked this touch of irony to his background, and there’s a certain sense of fun to this character.

So to sum up, the mixture is just right for Le Voyageur du Passé to succeed. The characters are better than Halter’s usual, and the writing is fairly good with some neat atmospheric moments. While the plot has its minor problems, especially with a few points that really stretch the reader’s credulity, the structure as a whole can stand on its own at the end of the day even if it’s not among Halter’s major works. It’s still a pretty enjoyable read and a good experience overall. I sure didn’t regret my purchase—and hey, there was even a crime scene map included. That automatically makes everything worthwhile.