Written by Patrick
This review is something of a follow-up to my sarcastic play-by-play commentary on the atrocious 2001 TV adaptation of Murder on the Orient Express. I wrote many of these comments a long time ago (at least in Internet minutes) when I first saw the episode in question. I have revisited some of these thoughts and edited some. Please let me know if you enjoy reading these articles, and if there's interest, the next time I do one of these I will attempt to prove that Suchet's version of Appointment With Death is really a thinly-veiled remake of The Mummy.

Murder on the Orient Express has been an episode looked forward to by Poirot fans for a very long time. And about the first 18 minutes are as close as you can get to a total mess. The movie begins with an uninspired and boring case to account for Poirot’s presence in Istanbul, which is extremely repetitive in insisting the perpetrator lied (How inconsiderate!). All Poirot does is shout about how much dishonour this man has brought—it’s basically a 1930s way of saying “You’re a disgrace to me, you’re a disgrace to your country, and you’re a disgrace to your momma!” It gets very boring, and the actor decides to commit suicide, which finally gets Poirot to shut up and look shocked for a few seconds. Unfortunately, he doesn’t stay silent for very long… 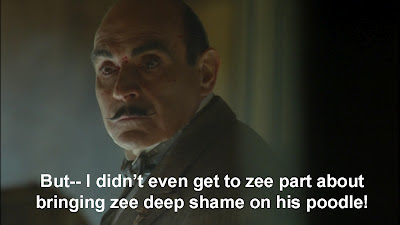 What annoys me most about this episode is that Poirot does a complete about-face in character with no warning. This is not the same man who showed great compassion to one of the suspects in The Hollow. This is not the same man who shared a touching scene with a woman whose dreams had been shattered in After the Funeral. He has suddenly turned into a religious fanatic—I mean, for crying out loud, how many references were there to his being a Catholic before this episode? Now, he does nothing but shout or deliver lengthy speeches on God’s justice, and even though I’m Catholic myself, it annoyed me intensely. This character is very inconsistent— he shows absolutely no human emotions after witnessing a stoning on the streets, and although he later says he was upset by it (no, really!), he laughs while saying this!!! (One other thing— if Poirot’s religion is so important to him, why in heaven’s name does he smoke while praying the Rosary? Oh for the love of pudding!) 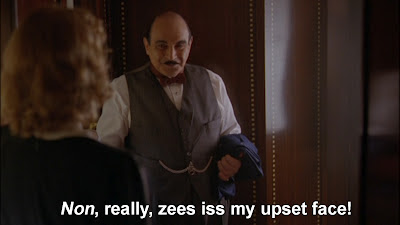 But to get back to the disaster the film’s opening was. I mentioned I hated the credits. If you watch them, you’ll see that the film cannot decide which direction to take the music in. It starts with a solo vocalist singing random, mindless sounds, before fading out in favour of the music. None of this feels like it belongs together. It’s simply awful, and the music that plays is loud, mechanical, and heavy-handed—as though a deaf person was trying to play the Inception theme. It’s a very ugly way to open the movie, and the general atmosphere of ugliness continues for a good 18 minutes.

The first bit of praise I have is with acting, and I give Toby Jones full marks here. He is perfectly convincing as the Mafioso who commits a heinous crime, and now that his life is in danger, he suddenly begins to believe in God (which he thinks of as extra protection). The man is a full-out hypocrite—you can believe it when Masterman says he was no gentleman but a sewer rat with plenty of money. He’s intensely dislikeable, and this is very good when the nature of his (truly appalling) crime is revealed. 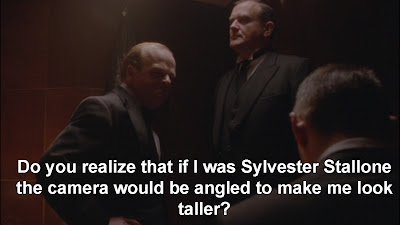 Generally speaking, the acting is good, except for two people whose acting was poor or very mediocre. These are Samuel West (Dr. Constantine) and Denis Menochet (Pierre Michel). Constantine, although being Greek, has no accent, which I discovered to my surprise when watching the same segment for the second time. For some reason I thought he had a bad one. But no, I was very much mistaken. His acting is just bad overall. This adaptation of Murder on the Orient Express changes several things, among them deleting the ‘private eye’ Hardman, and replacing his role with Constantine’s. Unfortunately, this was very poorly done. Was it the script or just West’s acting? I’m not sure. Anyways, Dr. Constantine is a dreadful doctor who can’t even count the number of stab wounds correctly, resulting in Poirot’s giving him a lecture on what the corpse really reveals (which actually isn’t too bad of a scene— until you realise Poirot was lecturing a doctor about medical evidence). He’s basically the Hastings of the adaptation, only more idiotic, and whose act of innocence wouldn’t have deceived a six year old. His guilt is obvious from the start, as he keeps trying to throw Poirot off track and making it apparent to anyone. His performance is the worst of the entire episode. Menochet, on the other hand, is very mediocre as Pierre Michel. Despite his clumsy use of English, he uses a lot of American slang in his dialogue, which just ends up sounding silly. 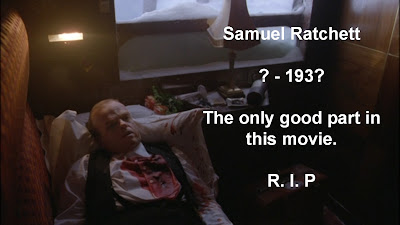 To get back to the film, things pick up as soon as Samuel Ratchett approaches Poirot and hires him for a job, automatically assuming Poirot will do it. Their confrontation is excellent and sets the tone for his murder wonderfully. Well, we go through the night of the murder, and the corpse is discovered. Poirot gives the idiot doctor a lesson in basic medical knowledge (I still refuse to believe that a doctor can’t count to 12), and he goes through a surprisingly good scene where he re-enacts the murder.

We blaze through the interviews and Poirot reveals the solution for a half hour.

OK, this was the adaptation’s worst problem. I thought the Albert Finney film drew things out too much, trying to give all its stars equal amounts of screen time. Here, Poirot barely even interviews the suspects. It’s entertaining viewing, but highly, highly rushed, so we can get to the half-hour drama where Poirot (who suddenly believes the law is flawless in all aspects—to hell with The Hollow or Five Little Pigs!) must decide whether or not to give away the killers. Here is what an interview of his might sound like:

Poirot: “Where, if you please, were you at the time of the murder?”
Dr. Sigmund von Hornswiggle: “I was admiring the landscape from the window in Mr. Ratchett’s compartment. It was the best compartment for doing so.”
P: “Ah, but did you not run into the murderer?”
S: “I’m afraid not.”
P: “Well, I apologise for bothering you, Monsieur. Do you believe in God?” 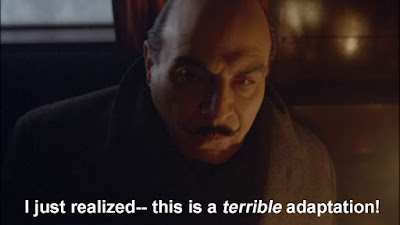 Poirot rushes through the interviews so he can get to the final half hour of drama, and the mystery suffers highly from it. But even worse is what happens during the final scene. All Poirot does is yell at how evil the culprits have been and how God should have been allowed to administer justice and bla bla bla bla bla. It’s very routine, boring stuff, and despite all of Poirot’s yelling, is relatively lifeless. The screenwriter, Stewart Harcourt, showed much more imagination in his script for “The Clocks”.

The final half hour gets very tedious. It’s basically (a) Poirot shouting (b) Poirot praying or (c) Poirot contemplating. It’s far too long, and it may have been better to simply chop ten minutes of that out and use those minutes to question the suspects more thoroughly.

Greta Ohlsson, one of the suspects, declares to Poirot that “Jesus said ‘Let those without sin cast the first stone’... Well I was without sin!!!” Now that is just horrendous dialogue, only serving to hit you over the head with the God element again. Other bad dialogue appears as well, such as when Mrs. Hubbard declares she wants to “kick someone up the ass” because the passengers are stranded on the train. 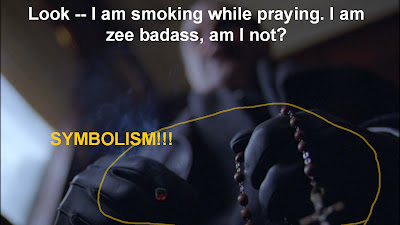 Now, I’m going to question the wisdom of the adaptation on a point. It emphasizes the whole theme of injustice of the original novel. Unfortunately, I think the novel had a better way of approaching injustice, as Samuel Ratchett is let off on a technicality. Perhaps the DA’s search warrant hurt his feelings. This seemed to be a clear comment from AC that “the law is an ass”. How could the law allow some really monstrous people to go free because of a minor detail that may not have been carried out to the letter? Well, the adaptation goes another way—Ratchett gets off because the DA is corrupt. I personally think AC’s way of commenting on the flaws of a justice system is far more effective.

There is a very effective final scene in the snow, in which the music finally redeems itself for its atrocious start, with some very nice notes to emphasize the situation. It’s also a good way to end it all.

Overall, Murder on the Orient Express proved to be quite disappointing. Its start is atrocious, its characterization of Poirot is inconsistent at best, and the screenwriter shows a distinct lack of inspiration. The whole thing ploughs through the suspect interviews at record speed so it can get to rather tedious and far-too-drawn-out drama. In addition, Poirot does practically nothing but yell when he confronts the culprit. Toby Jones is excellent as Samuel Ratchett, and is easily the brightest spot of the film. It’s entertaining enough for a viewing, but fails to deliver what I’d hoped. In a series of excellent adaptations, Orient Express is easily the worst.