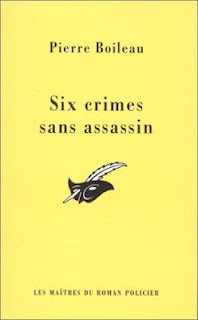 Pierre Boileau will forever be remembered as half of the Boileau-Narcejac writing team that got translated into English back in the day. Not only that, one of their novels was adapted by the great Alfred Hitchcock into Vertigo! How cool is that? But before Boileau and Narcejac met, they wrote their own stuff… and one of Pierre Boileau’s most famous works is Six crimes sans assassin (literally Six Crimes Without a Murderer, though I believe it was translated as The Phantom Strikes Six Times). It’s considered a classic of the French roman policier, right up there with the likes of S. A. Steeman’s L’Assassin habite au 21 (The Murderer Lives at No. 21), or, in my humble opinion, Paul Halter’s Le Diable de Dartmoor (The Demon of Dartmoor). (English readers, you really have no idea what treat you’re in for when Halter’s Demon is published in English soon!) And as the title indicates… it involves an impossible crime!

That right there is my entry for Understatement of the Year, for really, there are six crimes to solve, and each of them involves a baffling impossibility. First, the phantom murderer kills Marcel Vigueray and severely injures his wife, Simone, in a brutal attack in their Paris apartment. But here’s the tricky part: Simone screamed to alert the neighbourhood, and from that moment on, the apartment was under constant observation by hundreds of witnesses, as a crowd of people advanced towards the Vigueray’s apartment! They swear nobody left, but when the door is opened, the killer is nowhere to be found…

And that’s just a warm-up. In the next episode, a corpse appears in a room under observation without explanation. A possible witness, located in Le Mans, is told to lock himself inside a room and not to open the door to anyone but the investigators, no matter what. He agrees to do this: but the next day when the investigators arrive, he is dead from a gunshot wound!

All this is masterfully intertwined and explained by Boileau. The solutions are all ingenious, but unfortunately, I’m a blockhead and managed to spoil the solution to the first impossible crime. Because I knew the mechanics of that murder, I was able to deduce the killer, and so I was able to solve the fourth, fifth, and sixth crimes easily. I’m ashamed to admit that I was baffled by the third crime, which had a remarkably simple trick at its core, but several things managed to remain surprises: a nice bit about motive, a good, plausible explanation for why the victim should have done this-and-that, etc. I still enjoyed myself tremendously, especially since the story is told in a frantic pace, with crime after crime occurring so fast that I had no idea when Boileau would stop to take a breath and try to solve these impossibilities!

Fans of Golden Age mysteries will be pleased to hear that Boileau’s clueing is scrupulously fair. He never directly lies to the reader, but he does allow you to make false assumptions while parading the truth in front of you. It’s a deft exercise in fair play clueing, though as I said it’s a bit wasted on me due to my stupidity in spoiling the solution for myself.

Our detective for the evening is André Brunel, accompanied by his unnamed chronicler. Brunel is a fascinating detective: he has many of the qualities we associate with the traditional GAD detective. He’s eccentric, he likes to think of crime as a game, a mere logic puzzle. But in this outing, reality strikes him a heavy blow. This isn’t a “mere game”—he knew the victims intimately and cannot imagine why someone should organize a mass slaughter around them. He must suffer great emotional pain as Simone Vigueray teeters between life and death, and could easily shuffle off this mortal coil at any given moment. As if that wasn’t enough, he must break the news to Simone’s mother while keeping it from her little daughter Janine. He is confronted with the sheer nastiness of crime, and it humbles him enormously. What makes this so effective is that these passages do not slow the book down; indeed, they are part of what makes this book so fascinating. These aren’t long lectures on how to solve all of society’s problems—these are small, intimate scenes which are made all the more uncomfortable for that. 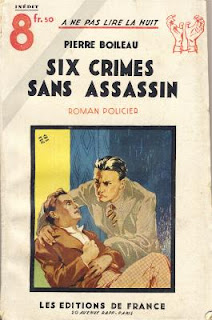 So we have an excellent detective, ingenuity by the bucketloads, an excellent and fast-flowing narrative, several impossible crimes… what’s not to like? Well, I do have one nitpick: the fourth crime occurs due to the detectives’ sheer stupidity. Two impossible crimes (and three murders/attempted murders) have occurred, and the best plan the police can think of is to tell a potential witness to lock himself into a room? They do not even bother to inform the police in Le Mans? It was an avoidable death… but really, are you going to be bothered much by that? Of course not. Six crimes sans assassin is not my favourite book of the year, but it’s pretty high on the list. (For some reasons, French authors are crushing the competition this year—I have yet to read a book that seriously challenges The Murderer Lives at No. 21 for the title of my favourite book this year!)

Although I think the book has been translated into English, I can only wish you all good luck in finding a copy. There’s none listed on Bookfinder.com, and a Google search for THE PHANTOM STRIKES SIX TIMES only leads you to several irrelevant listings and a previous post on my blog. It’s a shame: the book definitely deserves reprinting. Here’s hoping it becomes more widely available to English-speaking readers!