About the Murder of a Nobody 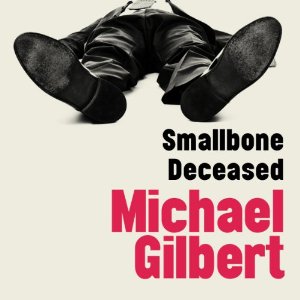 Mr. Marcus Smallbone was found dead under most original circumstances. Due to the lawyer Abel Horniman’s extremely sophisticated sorting system, a variety of clients have their own deed boxes, which are sealed in an air-tight manner in order to prevent the accidental destruction of documents. A key goes missing, a key belonging to the deed box of the Ichabod Stokes trust fund, of which Messrs. Smallbone and Horniman are the sole trustees. Mr. Horniman is now dead and Mr. Smallbone is nowhere to be found. Fearing the worst, that perhaps Mr. Smallbone has run off with the money, the box is forced open… and the firm’s employees make a grisly discovery: Mr. Smallbone, or rather his corpse, is in the deed box, and apparently has been there for weeks.

It is the plot of Michael Gilbert’s Smallbone Deceased, a book that everyone has told me is an absolute masterpiece—a must-read for detective fiction fans. But of course, that’s what people were telling me about Hamlet, Revenge! and I didn’t quite agree. So is this book really as good as its reputation suggests? Or is this just a lot of hype? 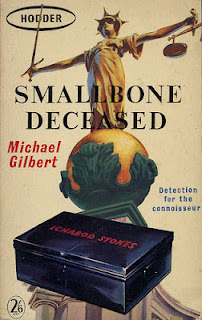 The answer: yes, this book was every bit as delightful as I expected it to be. Let’s make this perfectly clear: this is a masterpiece. Admittedly, the author doesn’t come up with some wildly original twist ending where it turns out the publisher was the murderer all along. This is very much a typical, GAD-style mystery where the clues are all given to you and you should spot the murderer if your eye is quick enough. The delight, however, is that Michael Gilbert gives you every shred of evidence and sometimes shoves it in your face. But the solution is an ingenious one and he still manages to pull off a neat trick of slight-of-hand. The culprit will likely elude most readers.

In Smallbone Deceased, you get a little bit of everything. You get terrific characters, and the character you follow around for most of the book is new to the Horniman legal firm, so you get the chance to follow him around and discover what the life of a lawyer in late 1940s London was like. Michael Gilbert was himself a lawyer, and so these scenes have a true touch of authenticity about them.

There’s also a terrific detective—to be more precise, two of them, including an official police investigator named Hazlerigg and a sleuth who represents the amateur squad. This probably formed my favourite aspect of the book, as the two detectives slowly hammer out the solution together. In their conversations, the book regularly pokes fun at the conventions of the detective story, with exchanges such as this one:

'Admit,' said Hazlerigg, 'that you expect me to spend my time sitting here asking a million questions. Occasionally moving round the office in a catlike manner, popping up unexpectedly when people are talking to each other, stooping to pick up minute scraps of paper and invisible threads of wool; all the time smoking a foul pipe or playing on a mouth organ or quoting Thucydides in order to establish a character for originality with the book reviewers—'
'Well—'
'Then, at the end of about seventy-five thousand words I shall collect you all into this room, and inaugurate a sort of verbal game of grandmother's steps, creeping up behind each of the suspects in turn and saying Boo! to them in order to make them jump. At the end of which, when everybody is exhausted, including the reader, I shall produce a revolver, confess that I committed the crime, and shoot myself in front of you all.' 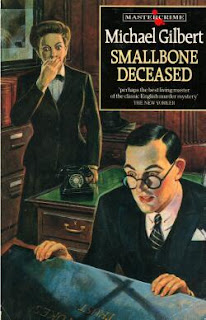 That right there is amusing, somewhat-true, and all in good fun. It understands that readers enjoy the genre, and like seeing the detective triumph over and over again. It playfully mocks the subpar examples, but it doesn’t dismiss the whole genre as rubbish. This is how you write satire—and not with a disgusting story about the theft of the family jewels. (If you have no idea what I’m talking about… consider yourself lucky.)

Overall, I must agree with the opinions that have come before me—Smallbone Deceased is a masterpiece of the genre and a must-read. It doesn’t invent a shocking new twist, but it manages to be quite ingenious and plays scrupulously fair with the clues. The characters are excellent and there’s quite a bit of satire on the genre, all of which is genuinely funny. The setting offers much of interest as well, and there are even some neat moments of suspense. This is a genuine puzzler, pure and simple— and I wouldn’t hesitate to call it one of the best mysteries I’ve read this year. I managed to read it via audiobook, but I’m pretty much guaranteed to buy a physical copy of this book in the near future.

Note: Smallbone Deceased is available from The Rue Morgue Press, whose paperbacks are always of a high quality.