One Hell of a Mess 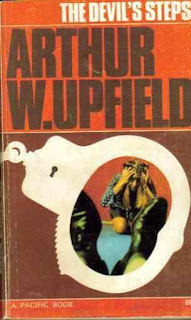 I don’t know what it is about me reading books involving the devil’s footprints of late. But that’s precisely what we get in Arthur Upfield’s The Devil’s Steps—at one point, it seems that Satan himself walked across a patch of grass, killing the grass there and leaving the imprint of enormous feet. And indeed, this is the cleverest situation of the book, and rather quickly explained. The rest of the book is a rather unsuccessful attempt to combine a mystery and a spy thriller of sorts.

Please be warned: I read an audiobook edition, and the narrator was good… but I have no idea how most of these names are spelled. So I won’t risk it. I’ll be avoiding names throughout this review. Anyhow, The Devil’s Steps opens with the murder of a German man down in an Australian guest home. Luckily, Inspector Napoleon Bonaparte is there to conduct the investigation? Although it’s not really a stroke of luck—it turns out the murder victim was a very highly placed official during the Third Reich and left the country with important state secrets that ‘Bony’ must recover before they fall into the wrong hands!


This leads to several fun scenes, such as when Bony is held up by a spy, who tricked his way into the house by pretending he was drunk and that he believed the house was a gigantic tree. It’s a highly amusing scene and also manages to turn into a tense one, as Bony’s life is threatened. Unfortunately, after that scene, the novel deflates, with only the “devil’s steps” briefly reviving things before the book flat-lines again.

I’ll admit it: I was lost. I had no idea what the heck was the point of all this. There’s something about a local dope king who walks onto the crime scene, is recognized by a police officer, and then shoots him. Then he turns around and does something so incredibly stupid I can’t even decide how to phrase it. I also have no idea why the police allow the guests at the guest-house to leave if they wish, resulting in a massive exodus and leaving us with so few suspects. But suspected of what? The murder? If so, why did the guests leave in the first place? And we know who the second murderer is!!! Are we supposed to suspect anyone or is this a straight thriller? 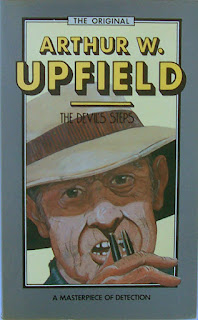 The answer is a kind-of confused mess of both. This tries to combine a spy thriller with a sort of police procedural, but neither angle is strong and both peter out long before the book’s end, making for a relatively tedious read with a few fun scenes here and there. I just wasn’t interested, which is odd because so much is at stake in the realm of the story. But instead of secret Nazi formulas, I found myself being far more interested with a local caretaker and his perpetually drunk pal, a mystery novelist with size 12 feet, and whether Bony would be able to recover the fountain pens he wanted for his wife and his son.

An interesting note is that the book begins with a disclaimer, where the publisher feels the need to emphasize that they do not condone the attitude towards Australian aboriginals or women. Now there are some remarks directed at aboriginals, but they are meant to be disgusting attitudes. Somebody mutters to himself that Bony must have friends high up, being a “half-caste” and therefore worthless, unintelligent, savage: the whole nine yards. Bony is the main character and a likeable one at that, and his being half-aboriginal makes for an interesting character. Moreover, we see that he is unusually talented, perceptive, and intelligent. And so when these thoughts are shared, these are meant to be repellent thoughts. (As for remarks against women, women will more likely be offended by the average rap song.) I guess we are unable to read into subtext these days, and so in order not to offend the Gods of Political Correctedness, the publisher has to make it clear that these thoughts are naughty.

This book has been read as part of my 2012 Vintage Mystery Reading Challenge, under the theme “Devil Take the Hindmost”.