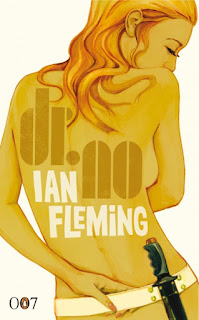 It’s interesting to look back on the story behind Ian Fleming’s sixth Bond adventure, Dr. No. After taking a major risk in From Russia With Love, Fleming decided to play things a bit safer in the follow-up. Many of the plot elements were taken from a proposed TV show, Commander Jamaica, where the main character was supposed to be named James Gunn, and his great enemy would be the half-German half-Chinese Dr. No. The project never came to fruition and so Fleming incorporated several of these ideas into Dr. No. And I must admit here that Dr. No is not my favourite James Bond novel. But it sure comes close.

It begins quite simply, with a murder. Commander John Strangways and his secretary are both gunned down one day, right before they are to make an urgent call to London. Strangways represents the Secret Service in Jamaica, you see, and he had an impeccable record with his calls. He had a habit of playing bridge with a few other men, and would leave the game every day at the same time to make the standard call to London. “It was an iron routine. Strangways was a man of iron routine. Unfortunately, strict patterns of behaviour can be deadly if they are read by an enemy.” 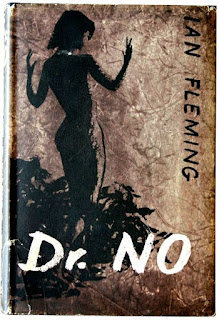 And so one day, Strangways is shot by a group of three “Chigros” – men who are half-Chinese, half-black. Next, they kill his secretary and make the bodies disappear. By the time someone is sent to investigate, the two are gone and the police are convinced that it is a case of two lovers deciding to disappear from the world.

But M is not satisfied and James Bond is called in. He met Strangways before – he collaborated with him back in Live and Let Die – and he doesn’t believe the runaway-lovebirds theory. He begins to dig around and realizes there’s something fishy in the nearby waters of Crab Key. The island was purchased by a German-Chinese man who calls himself Dr. No. The good doctor has put the island to excellent use, establishing a relatively profitable guano mine. Only Crab Key happens to be a natural habitat for a rare bird, the Roseate Spoonbill. The National Audubon Society has got a sanctuary established on the island dedicated to the bird. But recently things haven’t gone well and the bird population is slowly decreasing. As a result, the Audubon Society is crying foul and are demanding an investigation. 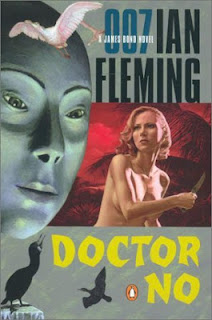 I daren’t reveal more of the story. What started as a simple murder investigation slowly turns into a nightmarish, adventure-filled extravaganza. It straddles the line between impossibility and implausibility. For instance, at one point Bond fights off a giant squid. While it’s not the kind of thing every secret agent has to do on his missions, in Fleming’s hands the scene doesn’t seem so outlandish. Thinking back on it, the scene seems like something out of a fantasy. But for a few key pages, Fleming had me convinced that such a thing could happen even if it doesn’t happen to people in “real life”.

Of all the Bond villains, Dr. No is one of the most colourful. This is all the more remarkable when you consider how he hides in the shadows for much of the book. But when we do finally meet this man, we find out his backstory, and he shows himself to be one of Bond’s toughest challenges. This is a villain who takes pleasure in his villainy, a man who subjects Bond to a maze full of various tortures. He meets a suitably nasty end. Bond villains have died in various ways throughout the series, including death via atomic bomb. Dr. No’s death is the most unpleasant one of the series thus far, and possibly the worst death in the entire Bond series. 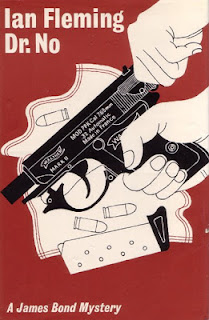 There’s also the Bond girl, Honeychile Rider. She’s a survivor, a girl who’s had a tough life. After her parents died she was raised by her nanny, and when the nanny died, Honeychile was left on her own. She had her nose broken by a man who raped her, and she’s very sensitive about this flaw. She has a beautiful body but she can’t see past her disfiguration. She comes to Crab Key to collect valuable shells, and she doesn’t trust Bond at first—she’s convinced he’s come to steal her stash. But they soon clear things up between them and team up to escape from Dr. No. The character is not explored as deeply as, say, Tiffany Case, but we know that we are dealing with more than just a pretty face here.

This book is also notable for the introduction of Major Boothroyd, aka Q, who became such a staple of the Bond films. Fleming named the character after a man named Geoffrey Boothroyd, who wrote to Fleming explaining that Bond's Beretta was all wrong and that 007 should get a new gun. I believe the reply he sent back was along the lines of "it's too late to change it for the next book [From Russia With Love] but I'll give him a new gun next time". The classic cover of FROM RUSSIA WITH LOVE even features one of Boothroyd's guns, a Smith & Wesson .38 revolver. During this time, a triple murder took place with a similar gun, and Boothroyd had to "assist the police with their inquiries" by proving that the gun was sent to Ian Fleming to use as a model for his next book cover.

I can’t say much more about Dr. No. It’s a wild adventure that starts small and ends big. It’s got a creative villain and Bond girl to remember. The plot borders on that of a fantasy novel but somehow, while you read, Fleming has you convinced that these elements don’t cross the line into impossibility. As a result this is one of the most entertaining Bond novels. I highly recommend it. Notes on the audiobook: Dr. No was read by Hugh Quarshie, and he was perfectly cast. He really nails the voice of Bond, that very British manner and the effect he has on the ladies. He also does a terrific job with Honeychile Rider, getting that feistiness and her sheer sexiness down pat. He also gets really into the character of Dr. No, giving his voice a suitably sinister edge without going over-the-top. In the post-audiobook interview, Quarshie revealed that he’d read Dr. No before, but only after seeing the film adaptation. If you’re a fan of this Bond novel, this is a must-hear audiobook performance.