007 Reloaded: The Man with the Golden Gun 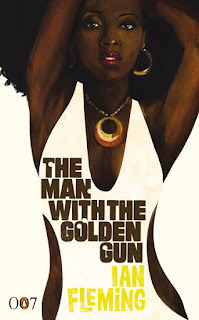 James Bond went missing after the events of his previous adventure, You Only Live Twice. He was finally reported as missing, believed killed and M wrote an obituary that appeared in the previous novel. But of course Bond is still very much alive, and he strolls back into London one day ready to report the results of his mission direct to M. But something seems wrong with Bond and suspicions are aroused. He’s acting almost too much like himself to the point of theatricality. Instead of coming back to his old flat, he’s staying at an expensive hotel. Instead of returning to England via one of the usual routes, he went by a circuitous route, entering the country with a faked passport.

When M sees Bond, we find out the reason for these discrepancies in a gloriously-over-the-top scene that somehow manages to really work. And once that’s out of the way, M decides to give Bond a new mission. Bond is sent out to Jamaica to pursue the assassin Scaramanga, known locally as The Man with the Golden Gun. Scaramanga is one of Bond’s deadliest opponents: an expert shot, in peak physical condition, and a sado-masochist who has sex right before he goes out for another hit job… The secret service has decided that it’s about time that Scaramanga’s career be terminated, and Bond is the man for the job. 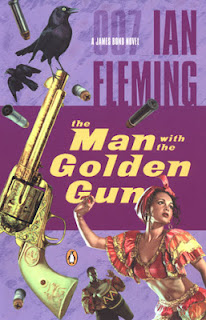 In many ways The Man with the Golden Gun is the exact inverse of the previous Bond adventure, You Only Live Twice. There, the plot was inspired but was almost single-handedly destroyed by a weak villain who was never much of a threat. But in this novel, the villain is top-notch stuff; it’s the plot that’s weak and can barely stand on its own legs. Everything eventually leads to one of the silliest showdowns in the Bond novels, a weak and underwhelming ending to the book. Or as we scientists like to phrase things, the ending just plain sucks.

To be fair, the story has its moments. The set-up is pretty good, with the opening scene being one of my favourites in the Bond series. It’s gloriously over-the-top and darkly humorous, but it’s also got a chilling element of inspiration to it. I daren’t say more because it’s a scene that really needs to be read to be fully appreciated.

But I can say this: this is the novel where James Bond is finally broken. If you liked the newest Bond film Skyfall, it’s surprising how much of it is inspired by this novel. Bond goes missing, presumed dead by his service when he shows up out of the blue. He has to rehabilitate himself and goes on a dangerous mission against a psychopath who shares a similar set of skills. These are good ideas, but are underdeveloped in this novel: Bond’s rehabilitation is handled in flashback mode in a couple of pages, and from there on he’s his old self. 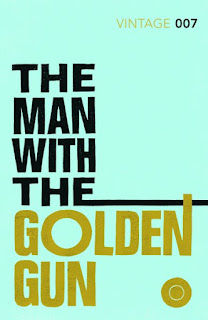 Making up for the plot’s shortcomings is Scaramanga, and I really mean it when I say that the villain is so strong that he almost single-handedly redeems this rather inconsequential novel. The titular “man with the golden gun” is an over-the-top, theatrical Bond villain who possesses a skill set similar to Bond’s. But he’s a dark reflection that takes Bond’s less desirable qualities and amplifies them – for instance, they both have a sado-masochistic streak running through them and use sex as a tool to get what they want. Scaramanga’s also got a third nipple, which gives his a really distinguishing physical feature among the great rogues’ gallery of Bond villains.

I must admit, though, that as good as Scaramanga is, I have no idea what exactly he was up to. Bond infiltrates Scaramanga’s organisation without any trouble, ostensibly acting as Scaramanga’s bodyguard/assistant. Yet Scaramanga doesn’t need one – why does he even offer Bond the job? Kingsley Amis offered an interesting theory: Scaramanga is gay, and this was part of his attempt to seduce Bond.

I can actually kind-of see that. The scenes between Bond and Scaramanga are the best of the entire book, as they exchange snappy dialogue. Bond tries his best to irritate Scaramanga by insulting him and just getting under his skin in general. Scaramanga doesn’t give in that easily. And as a result, some genuinely funny and memorable lines are exchanged. Even the ridiculous ending has some fun Bond/ Scaramanga moments that make it worth plowing through, and I can confidently say that this is the only Bond novel I’ve ever read where Latin is used as a weapon. (Yes, you read that right.) 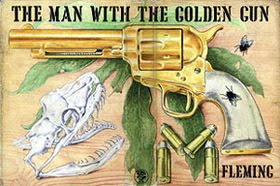 Although The Man with the Golden Gun is one of the very weakest Bond novels, it’s got enough good stuff in it to warrant a recommendation from me. I liked it a bit better on my second reading, as it happens. The plot isn’t particularly good despite a brilliant opening scene, but this book instead has Scaramanga, who is one of the best villains in the series. He and Bond share an interesting relationship, one that has got some homoerotic tones, reflects a distorted reality by exaggerating Bond’s less-desirable qualities, and offers up some really fun dialogue. Though I’d recommend reading You Only Live Twice before reading this book, it isn’t entirely necessary and you can follow the action along just fine by not knowing a thing about the plot. It would’ve been nice if Bond were to go out with another masterpiece on the same level as From Russia With Love, but this book is what we got and for what it is, it’s not half-bad at all. 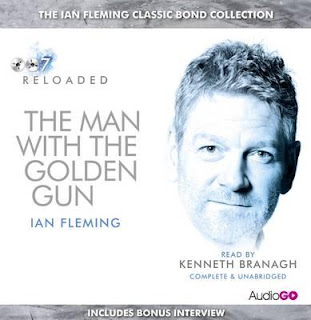 Notes on the audiobook: Kenneth Branagh read The Man with the Golden Gun, and as I suspected he was perfect for the book. Branagh is at his best when he’s doing something that is overly theatrical without quite descending into camp. It’s the sort of gloriously over-the-top stuff like the world of Asgard from Thor. Scaramanga is the kind of villain who falls right into Branagh’s territory. He’s just the right amount of over-the-top, and Branagh reads this book with terrific energy. He does a particularly good job with the Bond/Scaramanga dialogues and he just feels so right as this narrator. In the post-audiobook interview, Branagh admitted that he hadn’t read this particular novel before, but he had seen the film. (It’s kind of ironic, because although the film has nearly no resemblance to the original story, it’s got the same strengths and weaknesses as the novel: a great villain stuck in a pretty thin plot.) Either way, this was a terrific recording for one of the weakest Bond books.