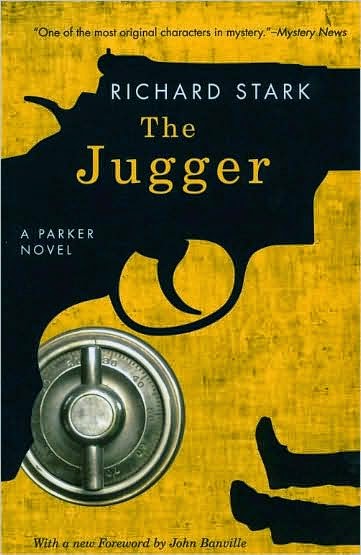 Joe Sheer was one of the best men available. He specialised in safes of all kind, and was sure to stay on top of all the new stuff coming out. He worked with some of the best people out there, including Parker. But then Joe Sheer got old, and decided to retire. He became Parker’s mailman of sorts – if someone wanted to get in touch with Parker, they had to get in touch with Joe first.

But after receiving a few panicky letters from Joe, Parker packs his bags and decides to pay his old friend a visit. Apparently, there’s trouble brewing for Joe, and he needs Parker’s help. But Parker is not going to visit Joe to see if he can help him – he’s going to see if he needs to kill Joe, if he’s gotten too soft, and if he’s compromised Parker’s cover. But when Parker arrives in town, he finds some disreputable types awaiting his arrival, and Joe Sheer is very much dead…

The Jugger is the sixth book in the Parker series by Donald E. Westlake, written under his Richard Stark pseudonym, and it is the book which Westlake often cited as his greatest failure. I was pleasantly surprised at just how good of a book it is. Although it is by no means the best Parker novel, it isn’t the dismal failure you might expect when reading Westlake’s thoughts on the book. Westlake seemed to think that this was the book in which Parker had gone soft, but the truth of the matter is, Parker’s still the same old guy. One of the murders he commits in this book is one of the more horrifying acts he’s committed thus far in the series, and the only reason he goes to see Joe in the first place is to see whether or not he has to kill him.

The villain of the book, Captain Abner Younger, is not a very interesting or compelling one, I’m afraid. That being said, his manipulation of Joe Sheer and the psychological torture he puts him through are very difficult sections to read and horrifying in their own way. But as chilling as these segments are, they soon enough get replaced with scenes of Younger being a stock villain. His schtick is that he wants to get ahead in the world, and he does incredibly stupid and dangerous things to achieve this goal. It’s a very different villain from the usual kind – this isn’t a thief out to double-cross Parker on the latest score, this is an ambitious man going to extreme lengths for the purposes of extortion. But his stupidity is such that there’s not all that much suspense – you feel confident that Parker is going to come out on top. That being said, the ending to this book is somewhat unexpected, and it’s worth reading for that alone. Suffice to say that book #7 has a lot to take into account from this book.

The Jugger is an interesting book. It’s not nearly as bad as the author’s comments might make you expect, and it has a few interesting elements. But the villain isn’t all that interesting, and it’s a safe bet that Parker’s going to win. It’s a good page turner, but not a book I see myself returning to in a hurry.