All murderers are equal, but some are more equal than others 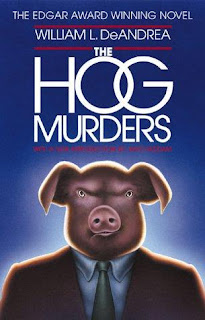 They talked about movies. Professor Benedetti, who had decided to come after all, turned out to be an avid fan of American westerns. Buell criticized them for not being true to life.
“What difference does that make?” Benedetti had replied. “They are not historical documents, they are entertainment. Do you believe the motion pictures produced in my native country show an accurate picture of the life of a roman gladiator? A motion picture is an illusion, possible only because of a defect in our perception; why should we ask more of it than diversion, eh? When real life offers so many more profound illusions.”
As if I needed another reason to like William L. DeAndrea, I’m starting to believe he was a fan of Westerns. After all, he wrote two Western mysteries and may have written more if not for his untimely death— as it happens, this quote came from chapter 14 of The HOG Murders, which I was able to read thanks to John over at Pretty Sinister Books, who heard my cry of despair over not being able to find the book (in my Killed on the Ice review) and graciously sent me a copy. It was well worth the wait.
Since becoming acquainted with DeAndrea, I have gotten extremely fond of him. His plots showed imagination, he had a good sense of humour, his characters were likeable, and unlike some modern day authors who bloat their books to 600 pages (a novel by P.D. James is a lethal weapon in the wrong hands), DeAndrea did not unnecessarily pad his books out. He was a very good, entertaining author, and he died way before his time before he was even 45. He won three Edgar Awards in his short life! Three!
I was particularly interested in The HOG Murders, a serial killer hunt that sounded intriguing. A madman simply known as Hog is going around the small town of Sparta (in the state of New York) cheerfully murdering people left and right for no apparent reason— he does not discriminate in his choice of victims, which range from an eight-year old child to an elderly man. Hog’s deaths may in fact seem like nothing more than elaborate accidents (or suicides), including a highway sign crushing someone to death and a beheading via a sheet of ice. Hog writes taunting notes to the police, showing off his crimes to the world and revealing facts that nobody but the murderer could have known about the case to prove that he was behind the crime. Hog does not preannounce his crimes, but his notes contain that arrogant note of “stop me if you can”, and they are effectively bone-chilling. (Naturally, when I refer to Hog as a “he”, I do so for the sake of convenience- it could be a man, woman, or even an actual hog! Read the book to find out which.)
Naturally, as a sucker for serial killer stories (refer to my Top 10 Plot Ideas), this got me interested in DeAndrea, and I’m glad to say he didn’t disappoint, coming up with a fresh twist on an old tale. I solved it, and I think it’s 100% fair: all the clues are given, complete with some red herrings. In fact, I know of at least one other person who was led astray by the same red herring which temporarily threw me off track. Ultimately, the solution is quite satisfying, and there are good answers to all the questions raised (such as why the killer chose HOG as his alias).
Solving the HOG murders is the eminent sleuth Professor Niccolo Benedetti, the eccentric-yet-brilliant amateur sleuth for the evening. An Italian, he has strange mannerisms by the bucket load: he basically solves his crimes by going into a foul mood for a bit and painting a picture of the killer’s soul. He also manages to never pay for anything and is a notorious ladies’ man. Assisting him is Ronald Gentry, the only private investigator trained by Benedetti in the world. They skip around from crime scene to crime scene trying to take HOG down. The clues are creative and interesting, such as a suspect’s angered reactions to children’s literature (though, curiously enough, Charlotte’s Web escapes his wrath).
The story is engaging, and the characters are plenty of fun, such as a self-conscious psychologist (ladies and gentlemen, we have a paradox!) named Janet Higgins. You really get to like and cheer for these characters. DeAndrea’s Stoutian influences pop up again with the team-up between Benedetti and Ronald, who would be perfectly cast in a stage version of The Odd Couple. (After all, remaking the movie is unthinkable!) And one of the HOG’s crimes is so horrifying that it immediately sides you with the investigators: you want the killer caught and punished.
Incidentally, I unreasonably like the cover of my book, which features a pig in a suit and tie. It reminds me of Orwell’s Animal Farm: it is grim and ugly, and it prepares you well for the crimes you are about to investigate side-by-side with the detectives.
Overall, The HOG Murders is an excellent entry into the serial-killer mystery subgenre, which makes for very pleasant reading— and even if you manage to find out who HOG is, there are plenty of other questions that have to be answered. Overall, it’s plenty of fun—in fact, it won an Edgar Award for best Paperback original in 1980. The award is well-deserved.
There were two more instalments in the Niccolo Benedetti series, but they appeared more than a decade after The HOG Murders: The Manx Murders and The Werewolf Murders. Both sound like plenty of fun, particularly The Werewolf Murders, and I will probably read them some day. If William DeAndrea ever wrote a dull word, I have yet to read it (and I doubt I ever will).