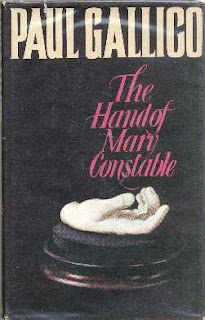 Back when I reviewed Paul Gallico’s Too Many Ghosts, I wrote that “From what I can discern, Too Many Ghosts is his only entry into the mystery genre, and it’s a pretty damn good one at that.” As it turns out, this was a lie on my part, and so, I went to confess my literary sins to Father Brown. He advised me that as penance, I should read and review the sequel, The Hand of Mary Constable. So here I am today …
First off, this book is entirely different from its predecessor. Too Many Ghosts was a mix of a supernatural mystery and a comedy, with only a few creepy scenes and a marvellous impossible problem. The Hand of Mary Constable seems to reverse this statement: it has a marvellous atmosphere, but its impossible problem ultimately is not given such an interesting solution.
The impossible problem in question is the titular hand of Mary Constable, a little girl who was diagnosed with leukemia and died, which proved a huge blow to her parents, particularly her father, Professor Constable, a leader in the field of cybernetics. Constable has gotten himself into a bit of a sticky situation, as the Bessmers, a sneaky pair of spiritualists, have the professor convinced they can summon his child back from the dead. Why? Because when the professor demanded proof that Mary Constable was alive, the Bessmers prepared some water and hot wax, and when a ghost appeared, it dipped its hand into the wax and then into the water. When the lights came back up, an impression of a hand remained—with a perfect set of fingerprints that match Mary Constable’s!!! Here’s where things get really interesting: the girl was cremated a few days after dying, nearly a year ago. So how could the Bessmers have possibly done it? Meanwhile, Constable’s obsession over rediscovering his dead daughter threatens a top-secret operation he is in charge of— a revolutionary weapon which should give the Americans the upper hand over the Russians…
Enter Alexander Hero, who masquerades as Peter Fairweather, a Cambridge lecturer whose fiancée recently died, leaving him bereaved. The fiancée, Ruth Lesley, never existed—but that doesn’t stop the Bessmers from producing her ghost! Now that you know the Bessmers are a couple of phonies, the question of how they pulled their tricks off remains. Most are the corny, traditional variety which Hero instantly unravels— but some are impressively new and different.
For a bit, Gallico succeeds in establishing an eerie atmosphere, but then, he allows it to self-destruct by revealing a piece of information to the reader that Alexander Hero is not aware of. Suddenly, you are aware that the hand of Mary Constable is a certain fake, while Hero still muses over the possibility that a spirit may be responsible. It is a gamble that does not pay off, and the eerie atmosphere disappears just like that.
However, the book is dark nonetheless, and this darkness saves the day in terms of atmosphere. Simply put, this is not a semi-comedy in the vein of Too Many Ghosts. In particular, the atmosphere is full to the brim with anti-Russian Cold War paranoia, as the FBI gets involved with Prof. Constable, believing that the Russians are behind the spiritualists, systematically brainwashing him to convince him that the Russians are the good guys and if he doesn’t play nice, he’ll never see his daughter in this life or the after-life, for that matter… It is engrossing and it is very well done, with plenty of very tense, suspenseful scenes, which often take place in the dark for some reason or other.
So what is my overall verdict? Is this book as good as, worse, or better than Too Many Ghosts? Well, I’m not quite certain. Both books have some very good things in them—Too Many Ghosts has a creative and original locked-room problem, and The Hand of Mary Constable has an interestingly dark atmosphere and a good set-up for an impossible problem. But both have problems—Too Many Ghosts has a somewhat inconsistent atmosphere, while The Hand of Mary Constable ultimately falls flat with a rather unremarkable solution I didn’t like too much. Both make for good reads, and it’s very interesting this time around to have Alexander Hero plucked out of the English countryside and investigating sinister events in the wilderness of New York City. And as the finale and the final scenes prove, Gallico could write. He wrote pretty darn well, as a matter of fact, nicely evoking a sense of tragedy, mystery, and wonder as Hero takes off in a plane.
Overall, Paul Gallico seems to have been criminally forgotten: a good, imaginative writer with likeable characters and with a good understanding of the supernatural mystery. I do wish that a till-now unpublished Alexander Hero adventure is rediscovered sometime soon…